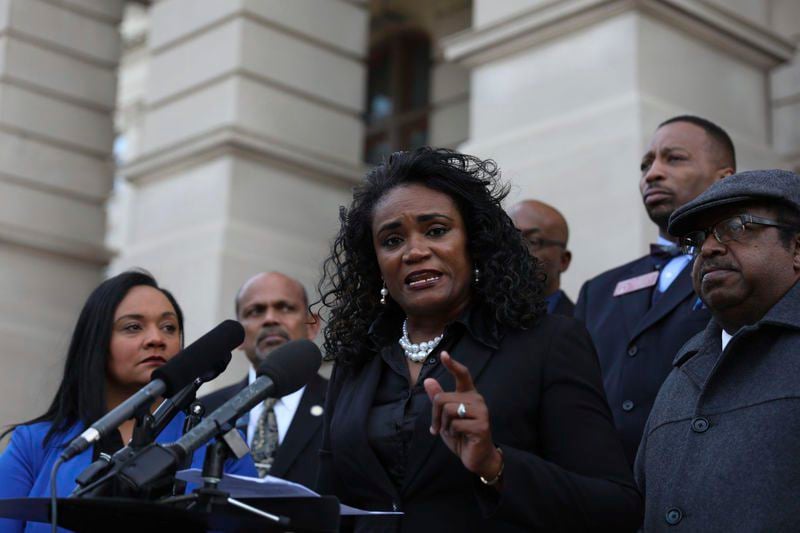 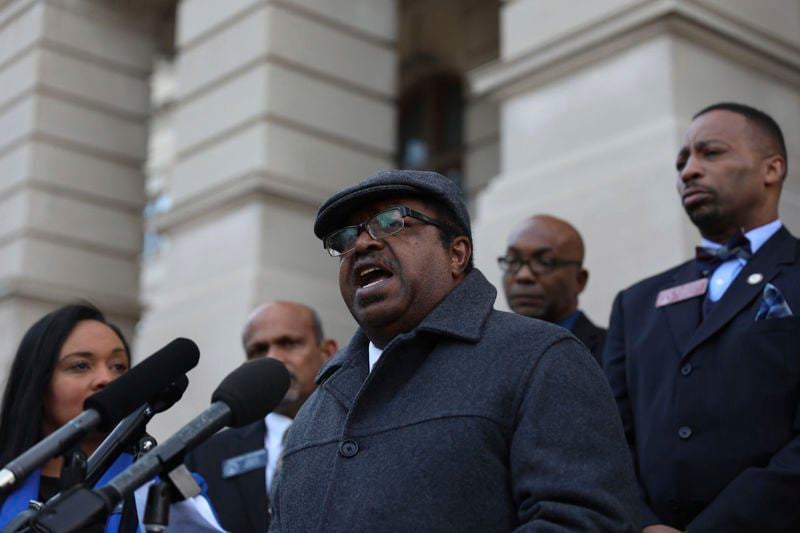 ATLANTA — Lawmakers showed up at the steps of the Georgia state Capitol Friday to protest President Donald Trump’s rally with black conservatives.

While crews and campaign staffers set up for Trump’s appearance at the Georgia World Congress Center, a group of black Democratic lawmakers and faith leaders gathered to speak out against his visit.

State Sen. Nikema Williams, chairwoman of the Democratic Party of Georgia, spoke first, criticizing the president’s use of Atlanta as a fishing net for black voters.

“Today, Donald Trump brings this backwards agenda to Georgia,” Williams said, “to pretend like his actions haven’t been a disaster for the black community and marginalized communities across the entire country.”

Williams cited the hard hit black households have taken at the hands of Trump’s tax reform policies and continued lack of access to health care for black Georgians.

“I see it very clearly, Donald Trump, his policies and his Republican Party are not speaking to the diversity of the needs of everyday Georgians,” she said.

The Rev. Timothy McDonald, pastor of the First Iconium Baptist Church in Atlanta, said Trump’s visit to the birthplace of Dr. Martin Luther King Jr. to court black voters was “a slap in the face.”

“Donald Trump has been a disaster for Americans of all backgrounds. But this attacks on the black community and particularly particularly dangerous and harmful to all Americans, this oppressive, systematic discrimination has to stop,” McDonald said. “And it has to stop now. For Donald Trump had the audacity to come to Atlanta, the home of Dr. Martin Luther King Jr., the cradle of the civil rights movement, to launch a program that he thinks it’s going to cause black people to vote for him. It’s outrageous. It is insane.”

Williams said that as a black American living in Atlanta, Trump is “the exact opposite of what we stand for in our communities.”

Growing up in Alabama, Williams said, she often heard her aunt’s stories of fighting for integration of the University of Alabama.

“I listened to the stories of what she went through — Thurgood Marshall was her attorney — and just suing the state of Alabama trying to get her into school,” Williams said, “and to hear Donald Trump stand on the side of the people who would have been opposed to my aunt having access to a state-funded education is ... it’s 2019 and we have someone sitting in the White House who is upholding white supremacists.”

Trump chose the wrong city to launch this initiative, she said.

The other lawmakers who spoke — state Reps. Derrick Jackson, D-Tyrone; Donna McLeod, D-Lawrenceville; Shelly Hutchinson, D-Snellville; and state Sen. Harold Jones, D-Augusta — all shared urgency in their messages of Trump’s “threat” to the country’s democracy and the rollbacks his administration has brought in criminal justice reform and reproductive rights.

Jackson said as a black man, military veteran, elected official and on behalf of his constituents, he stands against Trump’s political agenda.

Jackson mentioned his service in the Navy and the brave men and women who fought by his side.

“I know what American sacrifice and American patriotism looks like. And it’s nothing like Donald Trump,” he said. “As we stand here today, let me be absolutely clear. This man is the antithesis of everything we stand for as Americans. The division, disrespect and outright this name of our democratic institutions that have happened under his watch are the biggest threat to our democracy. This country has ever seen.”

McLeod mentioned Georgia’s maternal mortality crisis, specifically among black women. Trump has been “a disaster for health care in America” she said.

“Our state has been at the center of a maternal health crisis, disproportionately affected black women and our data. Georgia is the number one state for high maternal maternal mortality rate for black women,” McLeod said. “The Republicans extreme agenda threatens to rip reproductive rights in our state by passing Brian Kemp’s abortion ban and the Trump administration attempts to strip federal funds from health-care providers that provide reproductive care. Simply said under the Republicans health-care agenda, more women are likely to die.”

The message from all the speakers to Trump: Black voters will turn out in November to vote against him.

“We know who he is, we no longer have to guess and wonder. We know who he is, a morally bankrupt man, who will always put himself before the needs of our nation,” McDonald said. “A man who will never stop failing black Americans.”