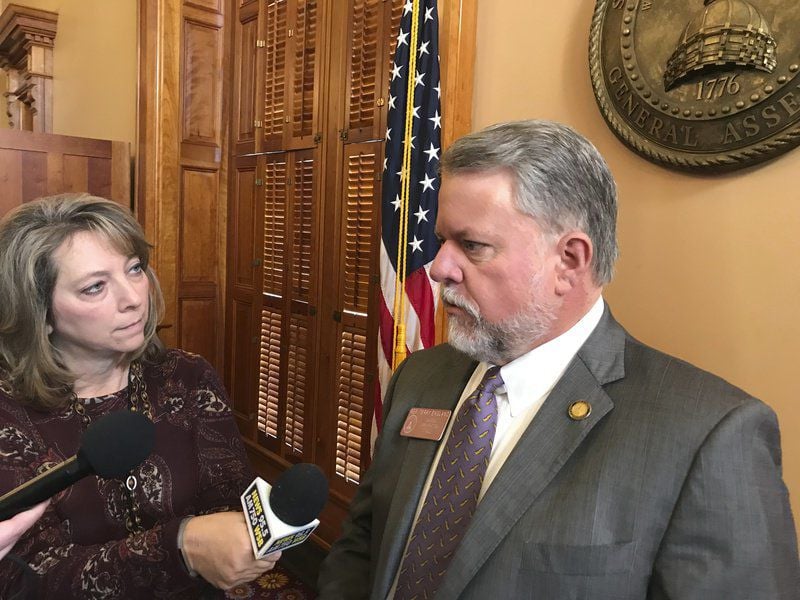 Jill Nolin | The Valdosta Daily TimesRep. Terry England, who chairs the budget-writing committee, talks to reporters about the budget outside the House chamber. Passing a balanced budget is the only matter that state lawmakers are constitutionally required to take up each legislative session. 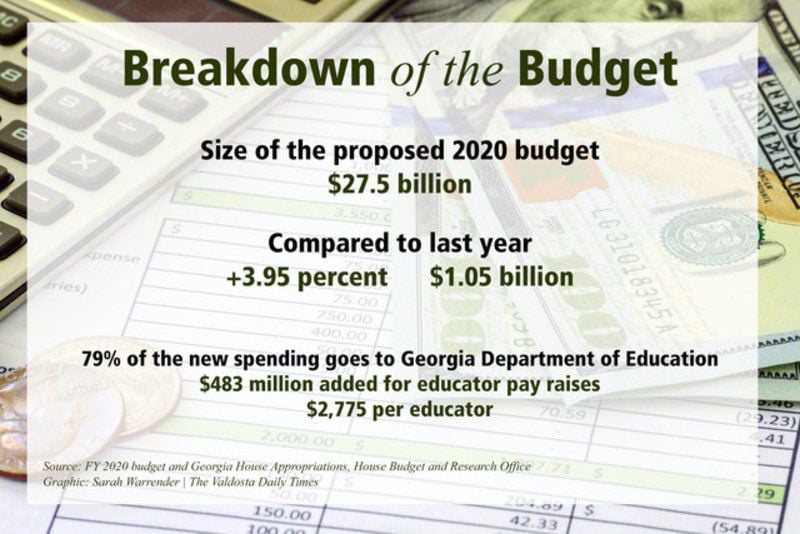 Jill Nolin | The Valdosta Daily TimesRep. Terry England, who chairs the budget-writing committee, talks to reporters about the budget outside the House chamber. Passing a balanced budget is the only matter that state lawmakers are constitutionally required to take up each legislative session.

ATLANTA – A record-setting pay raise for teachers and a $150 million plan to replace the state’s aging voting machines that currently lack a paper trail.

Those have been the headlines around the state’s $27.5 billion budget, which – once signed by the governor – takes effect in July. This proposed budget is the largest ever in state history.

Most of the new spending would go toward education, specifically for a pay raise that will cost the state $483 million. The pay hike was a key campaign promise of Gov. Brian Kemp, who has vowed to eventually give educators a $5,000 annual pay increase.

Kemp’s first installment – a proposed $3,000 pay bump – was scaled back slightly to $2,775 so the money could also extend to school counselors, social workers and others, adding nearly 10,000 more staff to the list of those receiving the increases.

“It represents, in this one step, an 8.1 percent increase to the base teacher starting salary, which is the largest pay raise for teachers in our state’s history,” Rep. Terry England, who chairs the budget-writing committee in the House, said to applause Thursday.

The spending plan cleared the House last week with a vote of 155 to 13, with several Democrats protesting the measure because of their Republican colleagues’ resistance to fully expand the state’s insurance program for the poor and disabled. The budget will now go to the Senate, where lawmakers there will leave their own imprint.

It may feel like good times, but the economic downturn can still feel fresh for the state’s budget writers and the scars left from deep budget cuts during the recession are still visible.

“I still tell everybody,” said Rep. Sam Watson, a Republican from Moultrie, who chairs the appropriations subcommittee that oversees general government spending. “Everything’s good but we’re still trying to catch up.”

Monthly revenues took a dip earlier this year compared to the last year, though the decrease is thought to be a fluke related to the recent tax law changes. On the whole, revenues are still up about 1.5 percent for the year.

And earlier this year, the state economist left lawmakers with a somewhat mixed forecast: Georgia’s economy will continue to grow, just at a slower pace.

“This is a record budget,” England said. “But we also have record population and record economic growth within the state as well.”

The massive spending plan touches every community and resident in some way.

Sometimes, the impact is in obvious ways, such as $29.5 million in bonds set aside for a new building at Wiregrass Georgia Technical College or $18.3 million for a new integrated science complex at Georgia College and State University in Milledgeville.

In other cases, the money trickles down in quieter ways, such as in the form of warm meals delivered to the hundreds of seniors across the state currently sitting on a wait list. There’s also $1 million that will make feminine hygiene products available at county public health departments for those who cannot afford to buy them.

Some of the SunLight Project areas will feel the effects of a push to grow the number of health-care providers in underserved areas of the state. So far, $90,000 has been budgeted to start a new residency program at South Georgia Medical Center.

“This is probably the single most impactful thing the hospital can do as a long-term strategy to recruit new physicians to our community,” said Rep. John LaHood, a Republican from Valdosta who sits on the House Health and Human Services Committee. “Because a high percentage of residency participants stay in communities where they do their residency.”

Nearly $900,000 has been added to support the training of students at the Philadelphia College of Osteopathic Medicine, including 40 students at the Moultrie campus. Altogether, the state has boosted medical education spending statewide by 137 percent more than the last five years, England said.

Lawmakers added money for a 2 percent pay raise for state workers, and they put in a little extra for foresters.

“We’re having a hard time retaining foresters and this will hopefully make them stay longer,” said Rep. Penny Houston, a Republican from Nashville who chairs the economic development appropriations committee.

About $300,000 was added to help small, rural communities with fewer than 2,500 residents clean up blighted areas. Lawmakers have upped what the state pays local sheriffs to house state inmates in the jail – an increase of $2 a day. Grandparents and other relative caregivers will see a small boost of $1 a day in assistance.

“Some of the things are small, but they mean an awful lot to those individuals who receive the help,” England said.

Case in point: About a dozen Democrats protested this year’s budget because of state leaders’ decision to bypass traditional Medicaid expansion and forego additional federal dollars.

Instead, Kemp wants lawmakers to sign off on a plan for his office to work with a consultant to seek flexibility from the federal government for how it spends the money it receives for Medicaid.

The Senate passed a measure last week allowing Kemp to pursue waivers that would extend Medicaid to targeted groups and attempt to lower insurance premiums on the Affordable Care Act exchange. If the measure clears the House, Kemp said he will work with a consultant to hash out the details.

But Democrats in the House decried the plan during a lengthy budget debate Thursday.

“If we were to put $143 million for Medicaid expansion in the budget before we leave this session, we could have 500,000 more people with health-care coverage on July 1 of this year,” Rep. David Dreyer, an Atlanta Democrat, said from the House floor. “We would be saving lives.”

Anticipating the argument, England emphasized the budget’s emphasis on growing the number of doctors throughout the state instead.

“It doesn’t matter if you’re insured with private insurance, with public Medicaid, BlueCross BlueShield blue, gold or platinum, or out-of-this-world kryptonite coverage,” he said. “If you don’t have a doc, it’s pointless.”