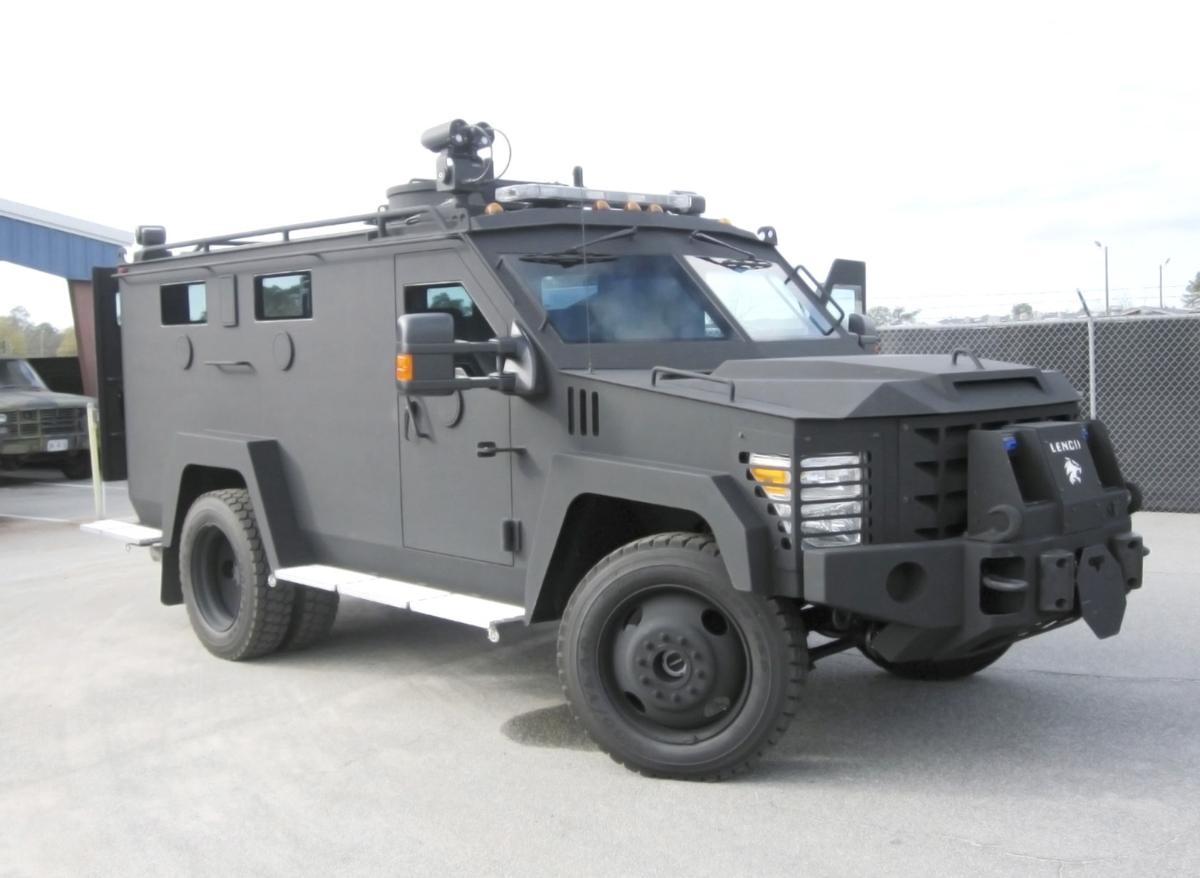 Dawn Castro | The Valdosta Daily Times Lowndes County’s fierce armored BearCat made its big debut last month when it was used in addition to a specialized robot to end a three-hour standoff. The BearCat replaces the elder Peacekeeper truck and will be utilized as Lowndes County Special Response Team’s primary rescue vehicle. It was purchased for $240,000 with funds received from a GEMA grant. 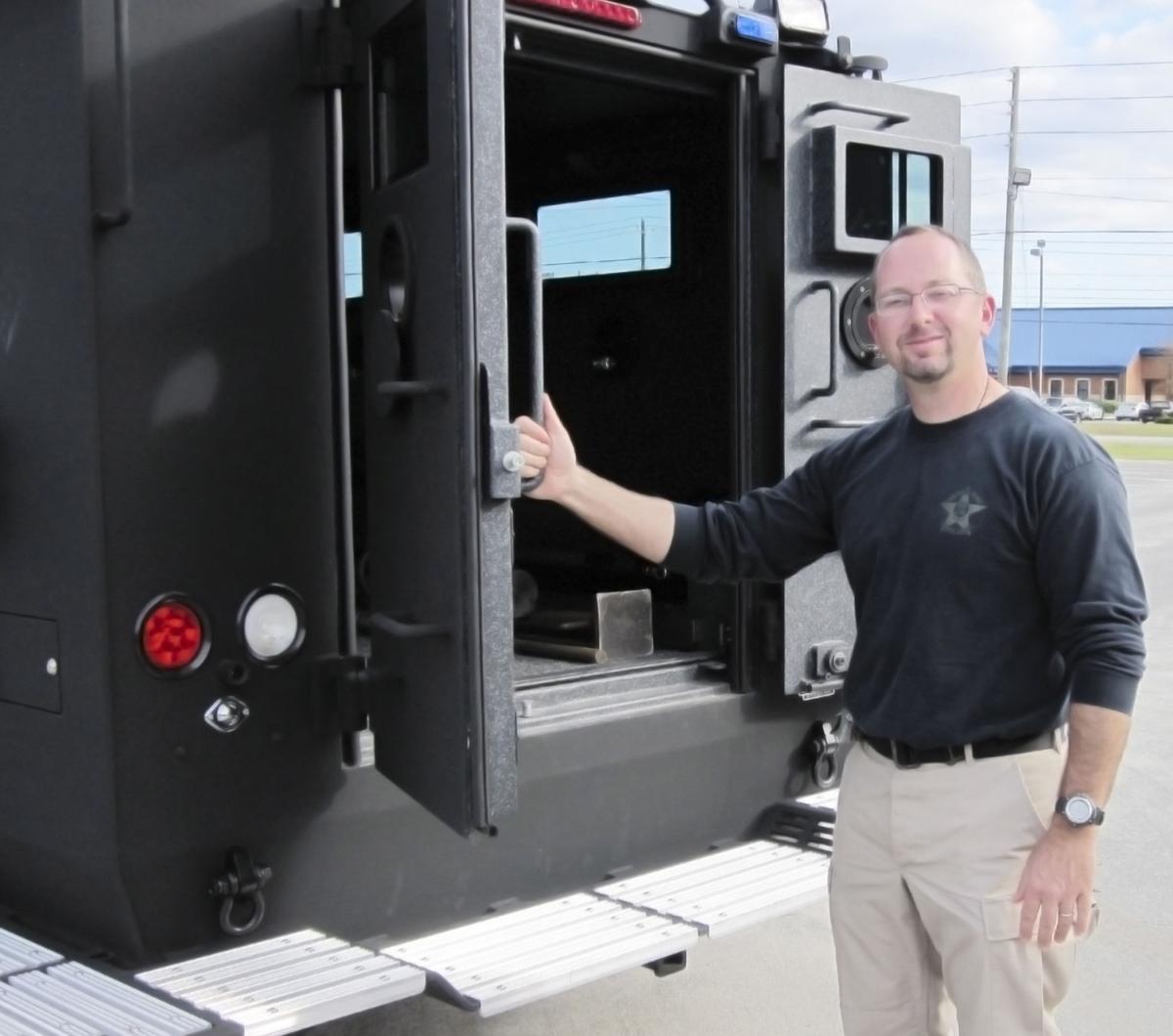 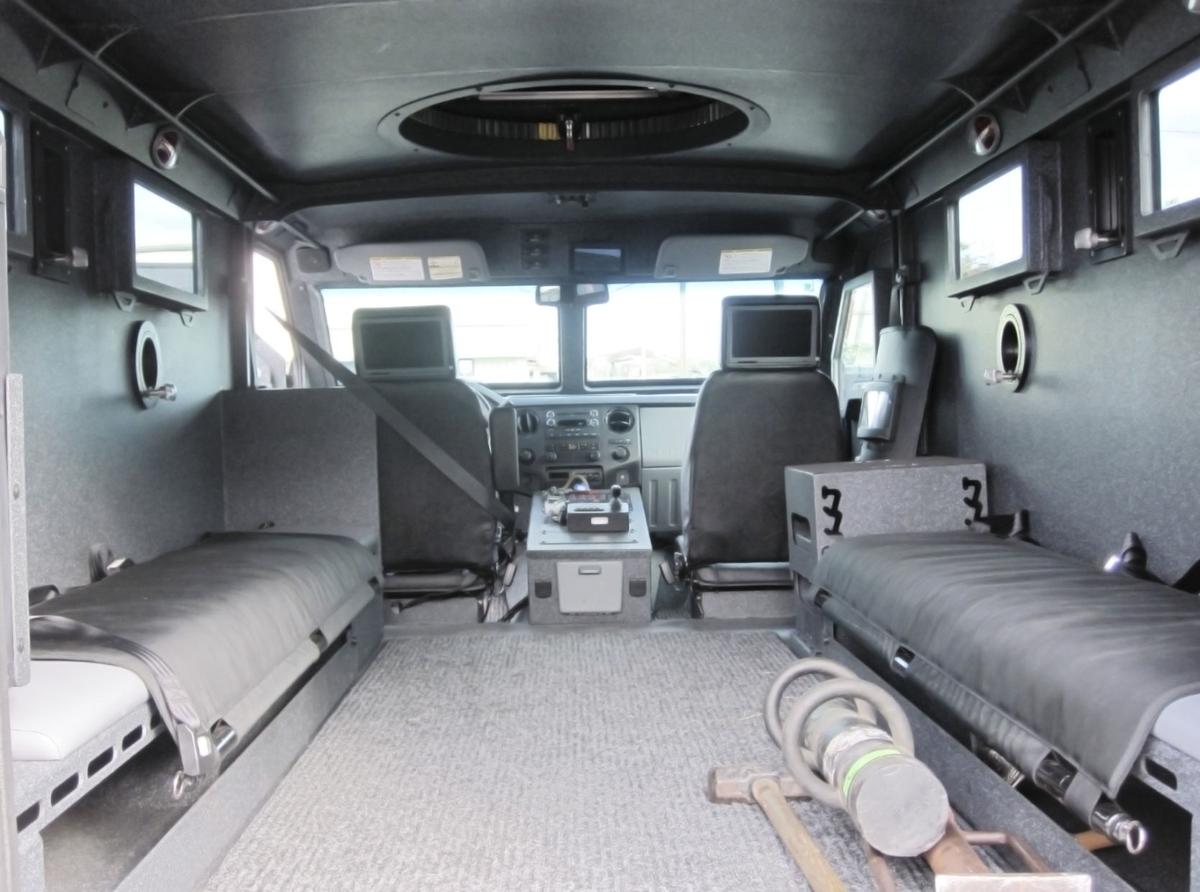 Dawn Castro | The Valdosta Daily Times The BearCat tactic vehicle offers more seating than that of the older Peackeeper vehicle once used as the primary truck driven by the Lowndes County Sheriff’s Special Response Team.

Dawn Castro | The Valdosta Daily Times Lowndes County’s fierce armored BearCat made its big debut last month when it was used in addition to a specialized robot to end a three-hour standoff. The BearCat replaces the elder Peacekeeper truck and will be utilized as Lowndes County Special Response Team’s primary rescue vehicle. It was purchased for $240,000 with funds received from a GEMA grant.

Dawn Castro | The Valdosta Daily Times The BearCat tactic vehicle offers more seating than that of the older Peackeeper vehicle once used as the primary truck driven by the Lowndes County Sheriff’s Special Response Team.

Lt. Joseph Dukes with the Lowndes County Sheriff’s Special Response Team took The Times on a tour of the ferocious BearCat armored vehicle used by both military and law-enforcement agencies across the U.S.

The name BearCat stands for Ballistic Engineered Armored Response Counter Attack Truck. It was birthed by the Lenco company out of Massachusetts, the same company that produces the Brinks trucks.

BearCats are typically referred to by law enforcement as being armored rescue vehicles primarily used to transport tactical SWAT officers to and from hostile situations and to assist with the recovery and protection of civilians in harm’s way during terrorist threats, hostage incidents or encounters with armed offenders. The BearCat is designed to provide protection from a variety of small arms, explosives and IED threats.

Like its larger cousin, the BEAR, the BearCat is able to be fitted with MARS (Mobile Adjustable Ramp System) which allows tactical officers to gain entry to elevated platforms such as second-story windows or aircraft.

Lowndes County received the new truck on Nov. 18, just in time to assist law enforcement with an incident that occurred a mere eight days later.

On Nov. 26, the Lowndes County SRT used the BearCat, robots and tear gas to end a three-hour standoff with a man who had barricaded himself inside his home, according to the county sheriff.

Deputies and emergency medical technicians also responded to the scene.

Specialized robots were sent into the house to locate the man, and tear gas was released in an effort to get the suspect to leave the residence, the sheriff said. No one was hurt during the standoff, however, the law enforcement robot was damaged by the suspect while inside the premises.

Lowndes County purchased the BearCat for $240,000 with the money received through the all-hazard Georgia Emergency Management Agency grant. After two years of being denied the funds, the relentless efforts of Lowndes sheriff’s Sgt. Jim Griffin and Lt. Jim Hightower landed the vehicle.

“I believe everything happens when it’s supposed to,” Dukes said. “We were approved. I went to Massachusetts to be trained on the vehicle, came back, days later a truck delivered one of the vehicles to Hall County (Gainesville) then to us. We wondered who would be the first to actually use it ... we won.”

Dukes briefly spoke on the incident that sent the BearCat into the home of the barricaded suspect. He said when the suspect refused to remove the furniture blocking the door and surrender to authorities, it was necessary to use survival tactics.

“Our goal is to always end the situation as peacefully as possible, while protecting our officers and the lives of the suspects as well,” Dukes said. “Having said that, if we are being shot at, we will respond by shooting back. Entering the suspect’s home in the vehicle protected us from potential danger and gave us the opportunity to end the standoff. It would have been a tactical nightmare for us if we didn’t have the truck. We literally drove through the front door when the suspect refused to exit the residence.”

The BearCat does not contain a lot of technical equipment. Specialized equipment is carried in another vehicle. The BearCat contains two important gurneys used mainly for ballistic protection and the evacuation of citizens. There are also gun ports which allow officers to shoot while safely inside the vehicle and also for less lethal equipment during emergency situations.

Dukes said tazers or gas can be deployed from the truck without harm being caused to the law-enforcement team.

“This vehicle really helps protect deputies,” he said. “We can actually use less force because of the protection the truck offers.”

A turret in the roof of the BearCat is another added device used for potentially hostile situations. The operator can stand on an elevation device inside the vehicle, open the turret and turn it in any direction. The lid offers that added protection which the operator needs in case of gunfire or thrown objects. It is also utilized to protect law enforcement at ground level in keeping a potential accident from occurring.

Before receiving the BearCat, Lowndes County depended on the old Peackeeper truck built in the 1960s. This machine lacked many of the characteristics visibly seen and felt in its new neighbor.

“The old truck does not have air-conditioning which on a hot Georgia day can become pretty uncomfortable when you have 10 men piled inside of it,” Dukes said. “We had to acquire bullet-proof glass to be installed for our protection. The hold area in the back is smaller than that of the BearCat, and the turret is much heavier, making it a little more difficult to operate...”

With just a turn of the key, the elder machine was audibly louder than the new vehicle. The ruckus from the “peacekeeper” overpowered the smooth purr of the BearCat. Dukes pointed out one of the downsides to having such a loud vehicle.

“It is really hard hearing when information comes over the radio,” the lieutenant said while shaking his head. “Not only did we have trouble hearing what was said, the person on the other end had trouble understanding us. In the situations we face, communication is such a vital part of handling a bust.”

Lowndes County still uses the old truck, just not as its primary rescue vehicle. The BearCat is owned by and stationed at the Lowndes County Sheriff’s Office but the tactical machine can be shared amongst neighboring agencies within a 100-mile radius.

Dukes has been with the Lowndes County tactical unit since 2001 and said he is very pleased with the county’s newest purchase.

“I am over protective of her,” he laughed. “This opens up a lot of possibilities for us ... not having to take the risks we had to in the past, makes us all breathe a little easier.”