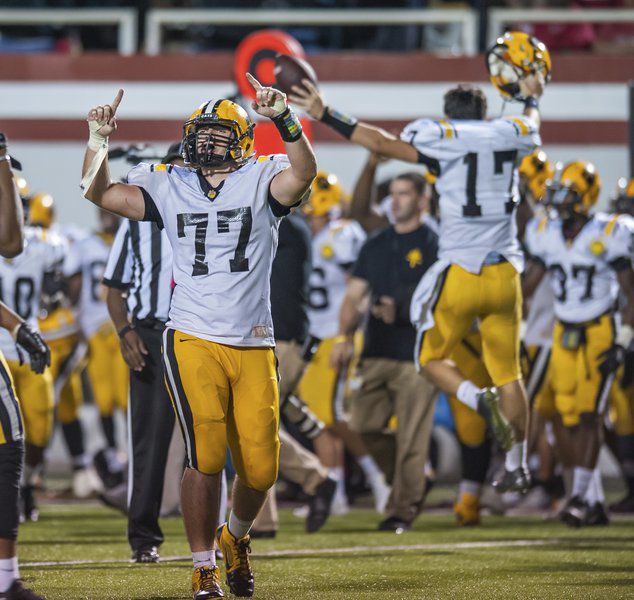 File Photo | The Valdosta Daily TimesA Valdosta player celebrates after the Wildcats secured a 17-7 victory over Lowndes in the 2015 Winnersville Classic. 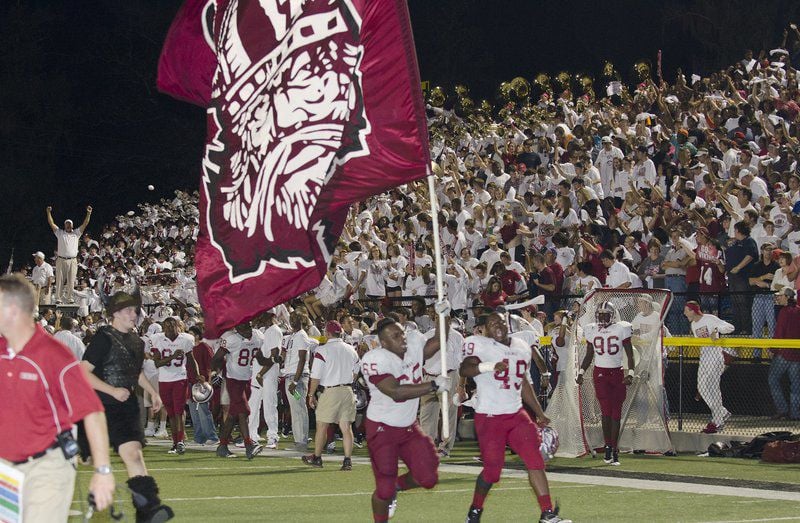 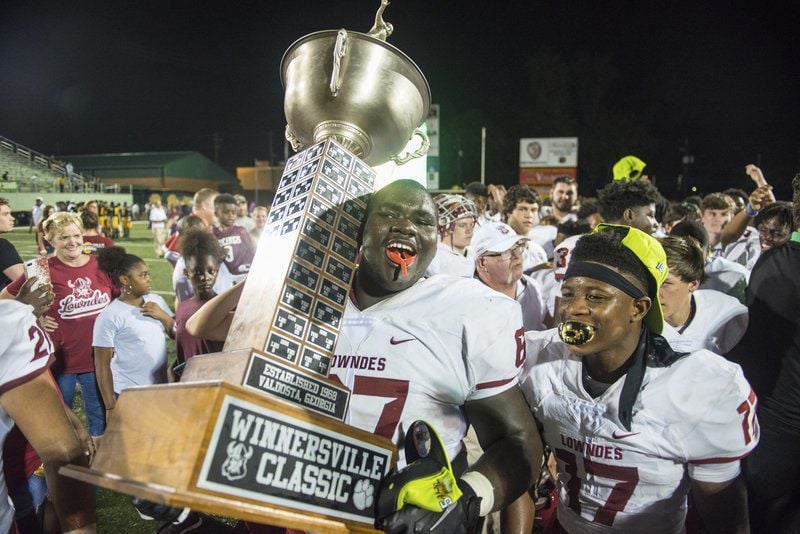 File Photo | The Valdosta Daily TimesA Valdosta player celebrates after the Wildcats secured a 17-7 victory over Lowndes in the 2015 Winnersville Classic.

The Winnersville Classic is one of the most recognizable rivalries in high school football.

It was never intended to be.

Originally, it was supposed to be just another game for powerhouse Valdosta High – one that happened to pit the championship Wildcats against the recently formed Lowndes High.

In 1968, during the first meeting between the schools, the Wildcats beat the Vikings 48-6 en route to another region and state championship under legendary coach Wright Bazemore.

The first eight meetings would be more of the same as the Wildcats outscored the Vikings 259-23.

Things began to change in 1976. Things that led to the legendary rivalry.

Former Valdosta assistant coach Joe Wilson became the head coach of the Vikings. Wilson played and coached under Bazemore for the Wildcats. He duplicated Bazemore's coaching style and implemented it with the Vikings.

He took over a program that was looking for direction and was longing to get out of the shadow of the Wildcats.

Wilson's efforts resulted in the first winning season in Lowndes’ short history. The Vikings went 8-2 in Wilson’s first season, giving Lowndes High a taste of the championship life the Wildcats had dominated for more than 50 years.

Still, one of Lowndes' two 1976 losses came against Valdosta in a 14-3 game. While it wasn’t victory, it fueled the belief the Vikings could top the Wildcats. The 14 points were the fewest Valdosta had ever scored against Lowndes.

To that point, the Vikings played in the shadow of the Wildcats.

The Wilson-era Vikings changed that.

In the next Valdosta-Lowndes game, Wilson’s Vikings held the Wildcats to only two points while scoring a touchdown. The game marked the first win for Lowndes against Valdosta.

A rivalry was born.

The origins of the rivalry start with Wilson but he was only beginning.

Valdosta responded with two victories in the same season the following year. The Wildcats took a 22-0 victory in the regular season and a 21-7 win in the region playoffs on the way to the first of seven state championships under legendary coach Nick Hyder.

Three seasons later the game became known as the Winnersville Classic — named after the first class of inductees in the Valdosta-Lowndes County Sports Hall of Fame.

Valdosta saw its best run of the Classic from 1981-96 — largely due to Hyder who holds the record for most wins by a coach in the series. Hyder went 23-5 against Lowndes in his 22 years as head coach of the Wildcats.

In 14 years as head coach after the Classic was named, Hyder only lost twice to the Vikings. Both losses came in 1985 — the only time Lowndes has beaten Valdosta twice in a season.

Lowndes finally broke free with a win in 1997 before finding three consecutive wins from 1999-2001 under coach Milt Miller.

In 2002, a new chapter opened for the Vikings as Randy McPherson was hired to replace Miller.

McPherson saw consecutive losses in his first two seasons but reeled off seven consecutive victories from 2004-10.

McPherson, who is still head coach of the Vikings, holds the most wins against Valdosta in Viking history with an 11-6 record.

“Every one of the wins against Valdosta is special for our whole community, team, coaches — everything," McPherson said. "It doesn’t matter, either team can win this game any year. Doesn’t matter how many in a row you’ve got or whatever. As long as this game is played, Valdosta could win or Lowndes could win.”

He saw that firsthand in the game that ended his winning streak.

The 2011 Classic was the 30th anniversary and possibly provided the wildest finish to date.

Valdosta trailed 17-7 with 1:14 remaining in the final quarter. They were able to score two touchdowns in the small window of time to win at Martin Stadium and break the Vikings’ seven-year win streak.

Lowndes responded with a pair of victories over the Wildcats including a 3-0 win in 2013 — the fewest points ever scored in the Classic.

Valdosta responded with its own pair of victories before the 2016 Classic was etched into the record books.

In 2016, the Georgia High School Association created a new classification in an attempt to stabilize completion throughout member schools. Only 48 schools were placed in the new 7A classification.

Lowndes was among those schools. Valdosta was not.

Despite the change in classification, the teams still face each other. The game had to be moved from deep in the schedule to make way for region competition.

For the first time ever, the Winnersville Classic would be held during the first game of the season.

It was almost fate because the Wildcats were sitting on win number 899 as they came into the start of the season.

All of the stars aligned and after a 38-13 victory, the Wildcats celebrated being the first — and only — high school football team to cross the 900-win threshold.

“I remember we had a chance to get the 900th win against Grayson in the second round of the playoffs and we got beat,” Rodemaker. “So right then I forgot about it but when we set the schedule for the next year most of the people in town said ‘Oh, Lowndes will be 900.’ So that was my first game as head coach.

"I don’t know that I can coach here 20 years and nothing will ever match that game," Rodemaker added. "We won it the way I like to win. Playing good defense and on special teams. That was a special night that no one could ever take away from us but it was more special because it was Lowndes-Valdosta.”

Rodemaker went on to win a state championship with the Wildcats that season. If they didn’t beat Lowndes in the season opener, it might’ve been less sweet.

Will the tradition continue?

The history continues to grow with each Classic.

In 2017, Lowndes posted a 45-0 victory over the Wildcats which is the widest margin in Winnersville history.

But the future of the classic is uncertain.

With the two schools remaining in separate classifications, the pursuit of a championship remains unaffected by wins or losses against each other. As it stands Valdosta holds a 37-20 advantage over the Vikings since the series began in 1968.

Regardless of wins or losses, the venom remains in the rivalry, even if only for a night.

Children grow up on the battle-drawn lines and dream of one day talking the field at Bazemore-Hyder or Martin Stadium.

And when they’re old enough to finally suit up, they play like they’re in a championship.

“If I could find a way to get my guys to play as hard every night as they do against Valdosta and put it in a bottle, I’d be a millionaire,” McPherson said. “It’s just something about that game where they play hard.”

For more than 50 years, these two schools have faced off in battle. Some years are more competitive than others but there is one word that will always describe Valdosta-Lowndes, no matter the event.

“Intense would probably be the word,” Rodemaker said. “I probably could think of a lot of words but not all of them are clean (laughing). It certainly is intense. Intensity I think would be the thing. I don’t know that it’s true hate but it’s pretty close between the fans. At least during the game, you would think that we hated each other.”

When the stadium lights are shut off and everyone goes their separate ways, you’re either a Viking or a Wildcat. There’s no in between.

“You’re either one or the other,” Rodemaker said. “If you go to a Christmas party or you go to the beach in the summer and somebody is from Valdosta, you’re either a Viking or a Wildcat. That’s it. You can’t be a little of both.”

The 2019 Winnersville Classic will be held Sept. 27 at Martin Stadium.