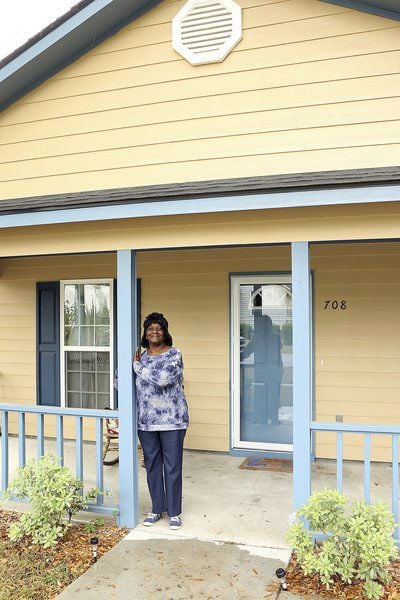 Derrek Vaughn | The Valdosta Daily TimesCarrie Kelley stands in front of her new $92,233.50 that was completely funded through the Community Block Development Grant. 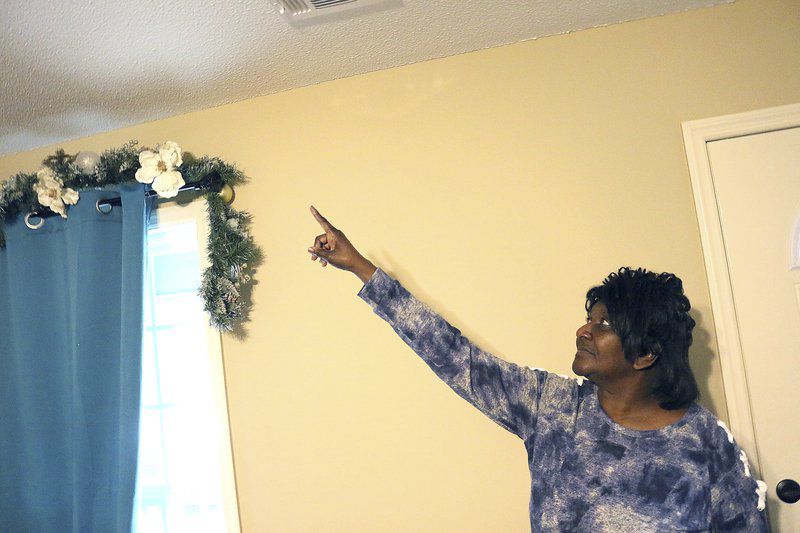 Derrek Vaughn | The Valdosta Daily TimesCarrie Kelley points to the ceiling in her new home that she said is her favorite feature. Kelley's old home had a hole in the ceiling for three years. 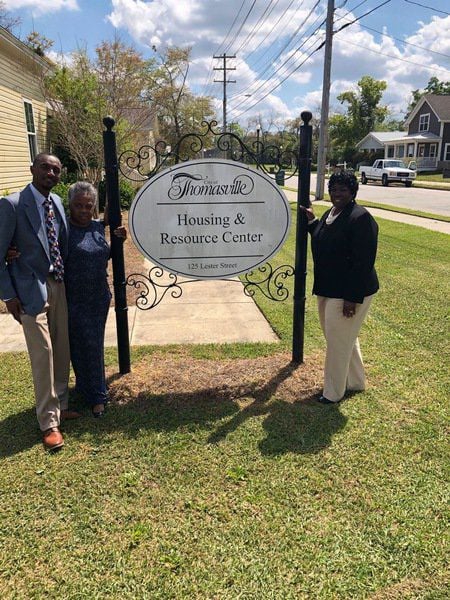 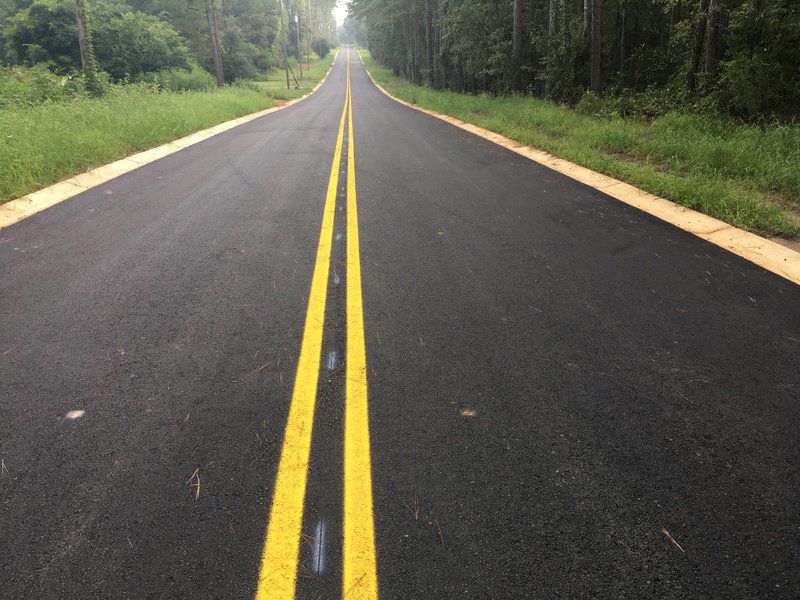 Derrek Vaughn | The Valdosta Daily TimesCarrie Kelley stands in front of her new $92,233.50 that was completely funded through the Community Block Development Grant.

Derrek Vaughn | The Valdosta Daily TimesCarrie Kelley points to the ceiling in her new home that she said is her favorite feature. Kelley's old home had a hole in the ceiling for three years.

VALDOSTA — Carrie Kelley works as a paraprofessional at Valdosta City Schools. She works with special needs children, makes $500 a month and lives alone in a cozy house along Floyd Street.

To Kelley, the best feature of her home is the roof, and the fact that it keeps the rain out.

Originally from Moultrie, the 66-year-old has lived in Valdosta for nearly 40 years. In the late 1990s, she decided to buy a house for $10,000 – a lot of money for someone only making $6,000 a year. In fact, it took Kelley 15 years to pay off that home, a place that was literally falling apart around her.

For one thing, the walls were paper thin. Any pressure would puncture the dry wall and leave a hole, she said.

But the roof caused her the most trouble.

One day, a large, square piece of the ceiling, located in the middle of the living room, just fell to the floor. It was the beginning of a new, terrible feature of the house. Pieces continued to fall from the spot until a gaping hole was all that was left.

"I could see the sky in my living room," Kelley said. "At night I could see the stars, everything. The rain was the worst. It would just pour inside. A friend told me I should put a tarp over it, but when I did that, it just blew away in the wind. ... What could I do?"

Kelley lived with a hole in her ceiling for three years.

Having put all of her money into buying the place, she had no other options but to stay. She couldn't afford to live anywhere else, and paying off the house took everything she had. Kelley took on a second job to make ends meet and did her best to survive.

Her only hope seemed to be a program that a friend from church told her about. She applied to be a part of the City of Valdosta's Community Development Block Grant, which, among other things, funds single-family rehabilitation and construction projects in the city. For five years, Kelley waited and asked about her application.

People at the city repeatedly told her the application process takes time and her application was being processed. After years of waiting, of freezing winters and blistering summers, Kelley simply gave up hope.

"I didn't want to trouble them anymore," she said.

It wasn't until a friend encouraged her to reapply for the program in 2017 that she took up the fight one last time. During the process of reapplying, she learned there was a mistake in her deed for the house. Someone left out the "e" in her last name, which seemed to be the issue with her application, she said.

The cost of fixing the deed was a lot of money to her – $112. At first, she didn't know if it was worth it. Even if she paid to fix the deed, nothing about the last five years of waiting gave her confidence that she would be approved for the grant and get a new home.

When the city approved Kelley's application, she was unable to contain her happiness. She jumped up and down, yelled with excitement and hugged everyone she could.

The home cost $92,233.50 and was completely funded through the Community Block Development Grant.

"Now, my life is just great," Kelley said. "I often look up and hear the rain, and I don't have to be afraid that it's going to come through the roof. That's the thing I like best about my house – the roof."

A Program of Hope

Kelley's story isn't unique to her.

People across the SunLight Project coverage areas – Valdosta, Tifton, Thomasville, Moultrie, Milledgeville and Dalton – and across the country have had their lives improved through the CDBG, a grant funded annually through the United States Department of Housing and Urban Development.

The CDBG is awarded to entitlement communities for infrastructure, housing, economic development and more. Valdosta city leaders said the biggest need in their city is housing, but the money can be and is used for any number of needs in other communities.

The City of Moultrie received $449,928 in 2013 to revitalize an area of Northwest Moultrie, one of the more blighted areas in the city.

Two CDBG grants both worth $750,000 were given to Thomasville in 2017 and 2018 with at least 90 percent of that funding geared toward water and sewer upgrades and replacements. Another 5 percent went toward stormwater improvements in the Fletcherville neighborhood, said Kenny Thompson, city planner.

Last year, the Housing Authority of the City of Dalton was awarded $275,000 from the city's share of federal CDBG funds.

Just 100 of the authority's 550 units have central heat and air, which is why the authority made providing the additions a priority for its grant money, said David McKone, authority executive director.

"We've used that to put central heat and air in another hundred units," McKone said. "That's a significant chunk of our units, and it has been really well received by our residents."

McKone said without the CDBG money, the authority could not have done that work.

"We don't receive subsidies from HUD, and while we charge rent to our residents, it is based on their income and ability to pay," he said.

During the past five years, the City of Dalton has received about $1.9 million in CDBG funds.

Dalton is an entitlement community, which means it gets CDBG funds each year based on a federal government formula, Dalton Chief Financial Officer Cindy Jackson said.

This means it doesn't have to apply annually for the grant through the state. The city does have an outside consultant that administers the funds.

"We tried managing in-house, but CDBG is such a complex specialized grant with a magnitude of federal regulations, that I can't devote the staff time needed to keep up with training, monitoring and other oversight required by HUD," Jackson said.

For Lowndes County, the CDBG is used to support agencies in the community that provide services the county can't, Lowndes County Commission Chairman Bill Slaughter said.

Unlike the City of Valdosta, the county only receives CDBG money every other year and money is set aside for capital improvement projects. In the past, the county got $500,000 from CDBG, but recently the amount was increased to $750,000.

Slaughter said the money is typically used to build facilities for these agencies to use. The money can't be used for program expenses and must service a certain amount of people in the public sector.

CDBG has gone toward building facilities for the Lowndes Associated Ministries to People homeless shelter, The Haven shelter and the Children's Advocacy Center. It also went toward renovating the Second Harvest food bank facility.

"We believe it is very crucial to be able to help these agencies," Slaughter said. "If it went away, it would certainly set us back. It's a partnership, instead of just a hand-out. It's improvements that they might not be able to come up with because of fundraiser limitations."

He said these organizations are doing the advocacy that the county can't necessarily provide.

Similar to the assistance programs in Valdosta/Lowndes, Ruth’s Cottage, a domestic violence prevention program in Tifton, broke ground on its new facility Dec. 10, 2018, with the help of CDBG funding.

The new facility will serve victims of sexual assault and domestic violence from the four counties in the Tift Judicial Circuit: Tift, Irwin, Turner and Worth.

Nancy Bryan, executive director of Ruth’s Cottage and The Patticake House, a service that helps child victims of sexual assault and domestic violence, said the facility is the culmination of a dream many years in the making.

“The good news is that this building is going up,” she said. “It’s going to enable us to house more people in a really comfortable, awesome place where they’ll not only be safe but they’ll be comfortable and happy.”

She said the staff will benefit from added security, and the facility will have a room for educating the public about domestic violence.

A Hand Up Not a Hand Out

Vanassa Flucas, director of neighborhood development and community protection in Valdosta, said since 2004 the city has focused on eliminating substandard housing.

She said Valdosta receives on average about $500,000 a year. For Fiscal Year 2018, more than half of that money went toward single unit residential rehabilitation.

They averaged 60 projects a year with CDBG funds, but, generally speaking, they spend up to $5,000 on minor rehab projects and roughly $10,000 on demolition projects.

"We have a code enforcement program as well, but that could range from $500 to $2,500," said Cynthia D. Jardon, communications for the City of Alexandria.

In Valdosta, it's CDBG money is used to offer owner-occupied housing rehabilitation through direct loans and grants to low and moderate income homeowners.

"This money is geared to benefit low to moderate income persons," Flucas said. "If the city didn't get this half-million every year, we wouldn't get a neighborhood development department. We wouldn't have our single-housing rehab program. We wouldn't be doing small business education and technical assistance. We wouldn't be doing bulk trash and city clean ups."

Without the CDBG, the city does not have the funds to help people such as Carrie Kelley. She would still be living in a home with a hole in her roof.

"All of this stuff would not be possible," Flucas said. "I just want to help people. I want to take this money and use it to help people. It's filling a gap that they can't fill on their own. They just can't. We are catching people at the lowest point in their life. These are not hand-outs. These are hand-ups."