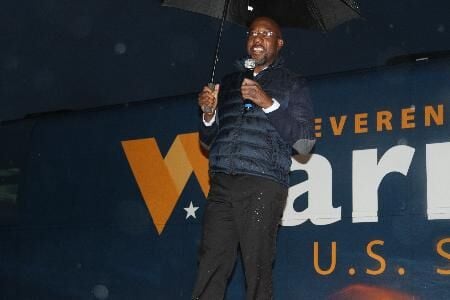 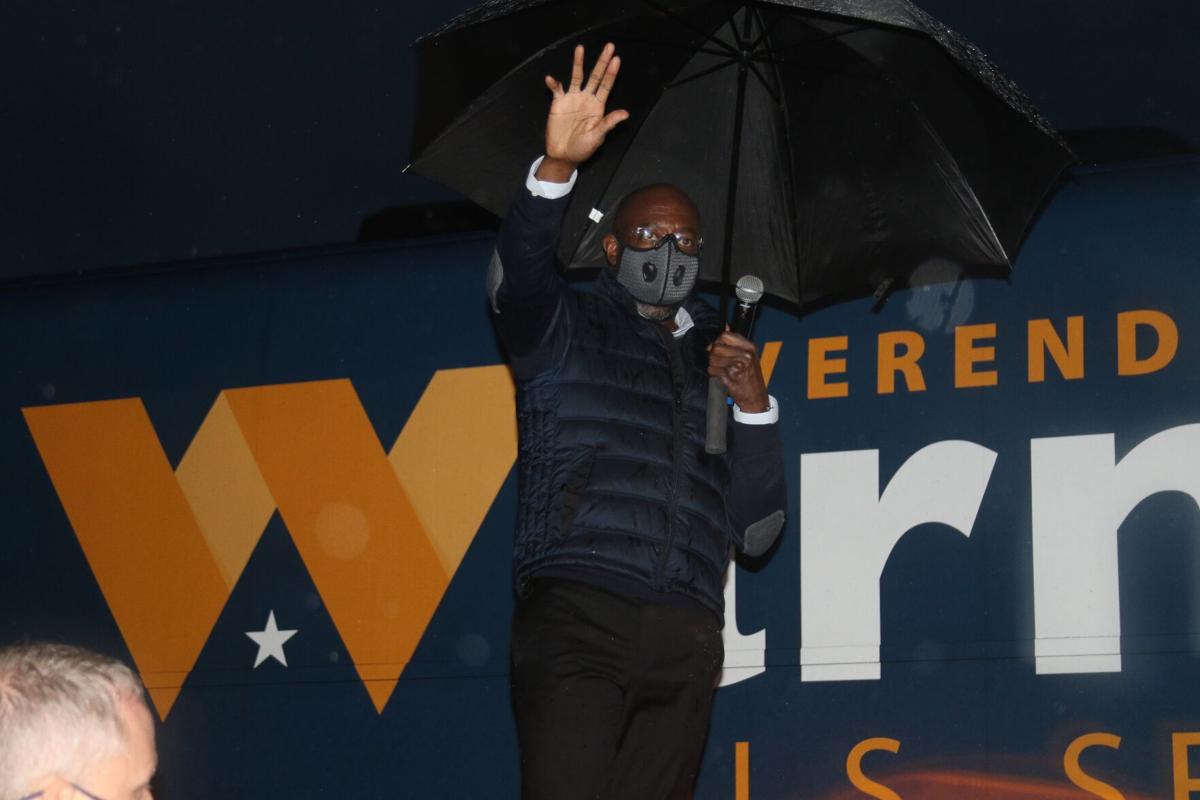 The Rev. Raphael Warnock, a Democratic candidate in the U.S. Senate runoff, makes a campaign stop Saturday in Valdosta at New Life Ministries during his 'It's Time to Vote' drive-in rally.

The Rev. Raphael Warnock, a Democratic candidate in the U.S. Senate runoff, makes a campaign stop Saturday in Valdosta at New Life Ministries during his 'It's Time to Vote' drive-in rally.

VALDOSTA – Raindrops fell and horns honked as the Warnock for Georgia campaign bus rolled off of Inner Perimeter Road and into the New Life Ministries parking lot.

People sat for at least two hours in their cars Saturday awaiting the arrival of the Rev. Raphael Warnock, the Democratic challenger opposing GOP candidate Sen. Kelly Loeffler in the U.S. Senate runoff.

Some of the reverend’s first words upon exiting his bus and hitting the stage at the "It's Time to Vote" drive-in rally, “Looks like it’s raining change in Georgia.”

Cheers and horns erupted in support.

Not only did Warnock call the state a “new Georgia,” he deemed it the “blue Georgia.”

“It’s a new year. It’s a new moment,” he said to the crowd. "The rest of the country did not see Georgia coming on Nov. 3 but Georgia showed up in a mighty way.”

For the first time since 1992, Georgia flipped from being a predominantly Republican state to Democratic when President-elect Joe Biden secured the state’s votes in the general election.

Warnock told The Valdosta Daily Times the state’s transition is due to Georgians and their understanding of various issues on the ballot, such as health care and COVID-19 relief.

“It’s the people of Georgia who have turned the state blue,” he said. “This is a result of work we have been doing for a decade and more. We’ve been registering voters all across this state.”

Warnock visited Valdosta while on the campaign trail during the general election.

The Savannah native told The Times he came back Saturday to show he wants to be a senator for all Georgians. Even if he’s elected to the Senate seat, he said he will return.

He told the crowd that he is “ready to be the people’s senator.”

Madelyn James, 13, watched with her family; she believes she will be impacted by whoever is in the Senate.

“If we have a good Senate and a good government, then things will change for me when I’m older and I can change and make things better for my kids and it’ll keep going,” she said.

The change will last throughout generations, she said.

Her dad, Ed James, was raised Republican but has been a Democrat for 16 years, having voted for former President Barack Obama in 2008.

He said it is crucial the Democrats win the Senate runoff, adding a lot of hard work has been put into turning Georgia blue and the momentum should continue.

“We feel that Georgia, Valdosta in particular, is such an important factor in the nation right now,” he said. "It’s important to turn Valdosta blue, and we’re just real passionate about that.”

While early voting is closed, Warnock told people who have already voted their work has yet to be completed. He encouraged them to urge others to vote Tuesday, Jan. 5, Election Day.

He said people should remain focused and a strong voter turnout Tuesday is necessary.

Visit lowndescounty.com/221/Elections-Voting for information about voting in Lowndes County.