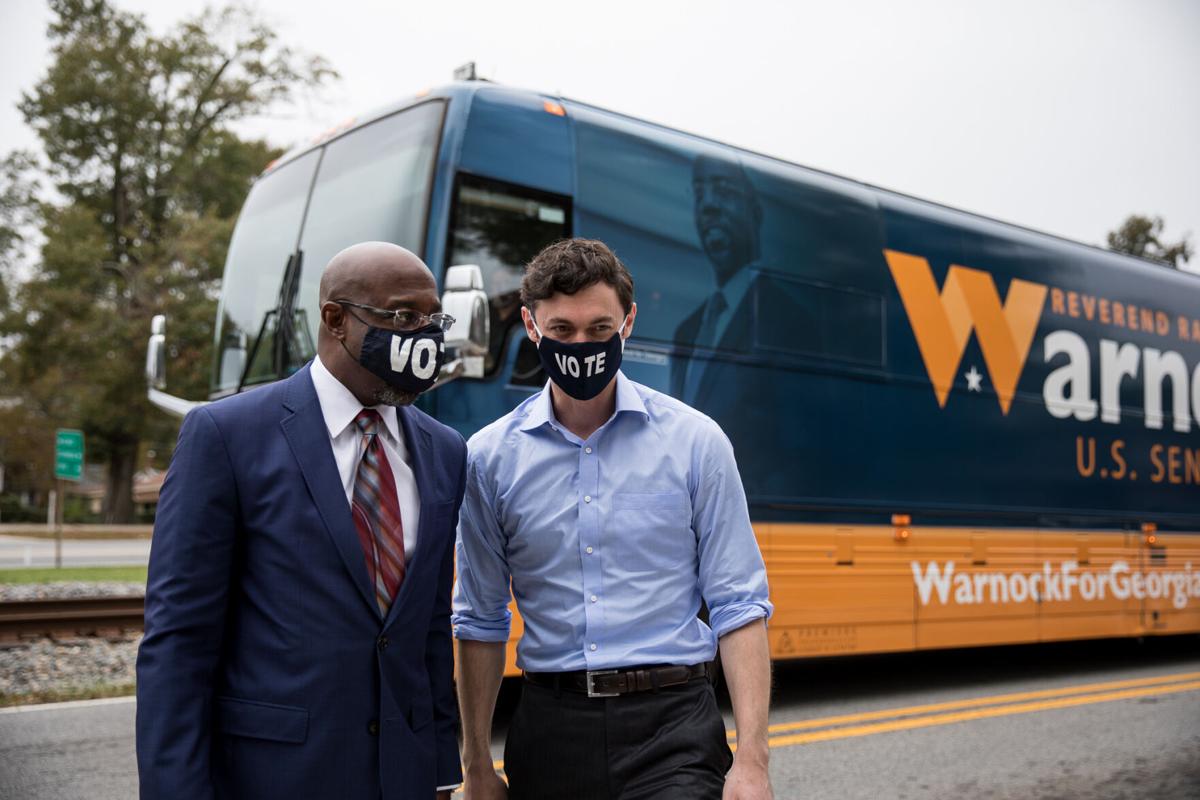 Democratic candidates for U.S. Senate Jon Ossoff and Rev. Raphael Warnock arrive at a joint rally in Jonesboro on Oct. 27. 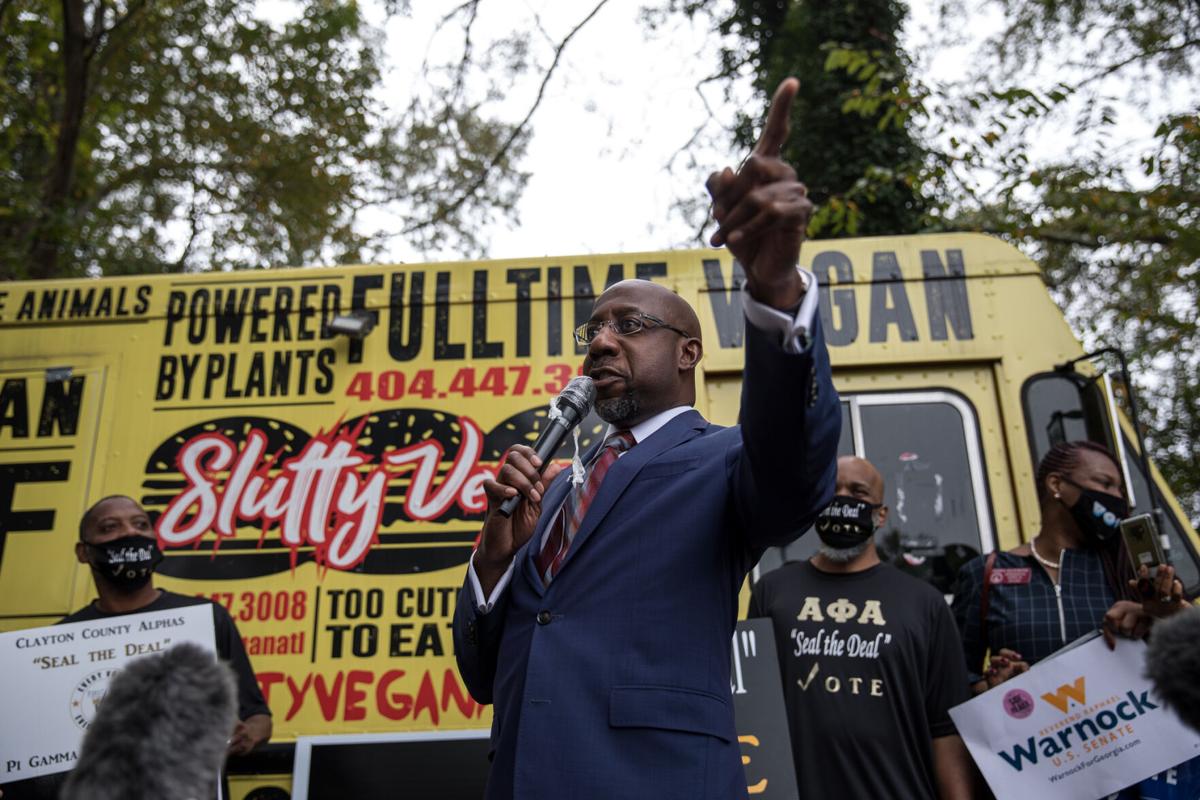 Rev. Raphael Warnock, a candidate in the U.S. Senate special election race, touts increased Democratic enthusiasm throughout the state of Georgia during a rally in Jonesboro on Oct. 27. 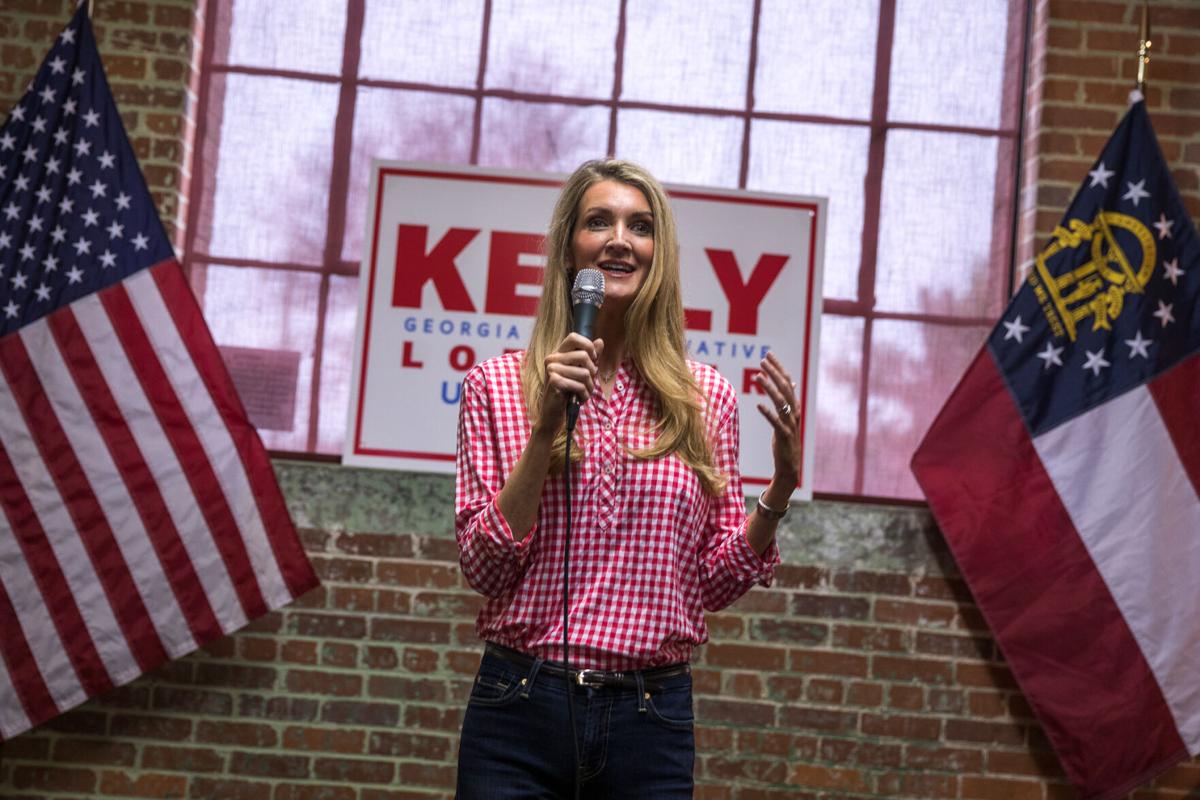 Sen. Kelly Loeffler boasts her strong pro-life stance while at a campaign stop at Bare Bones Steakhouse in Buford, Georgia on Oct. 28. 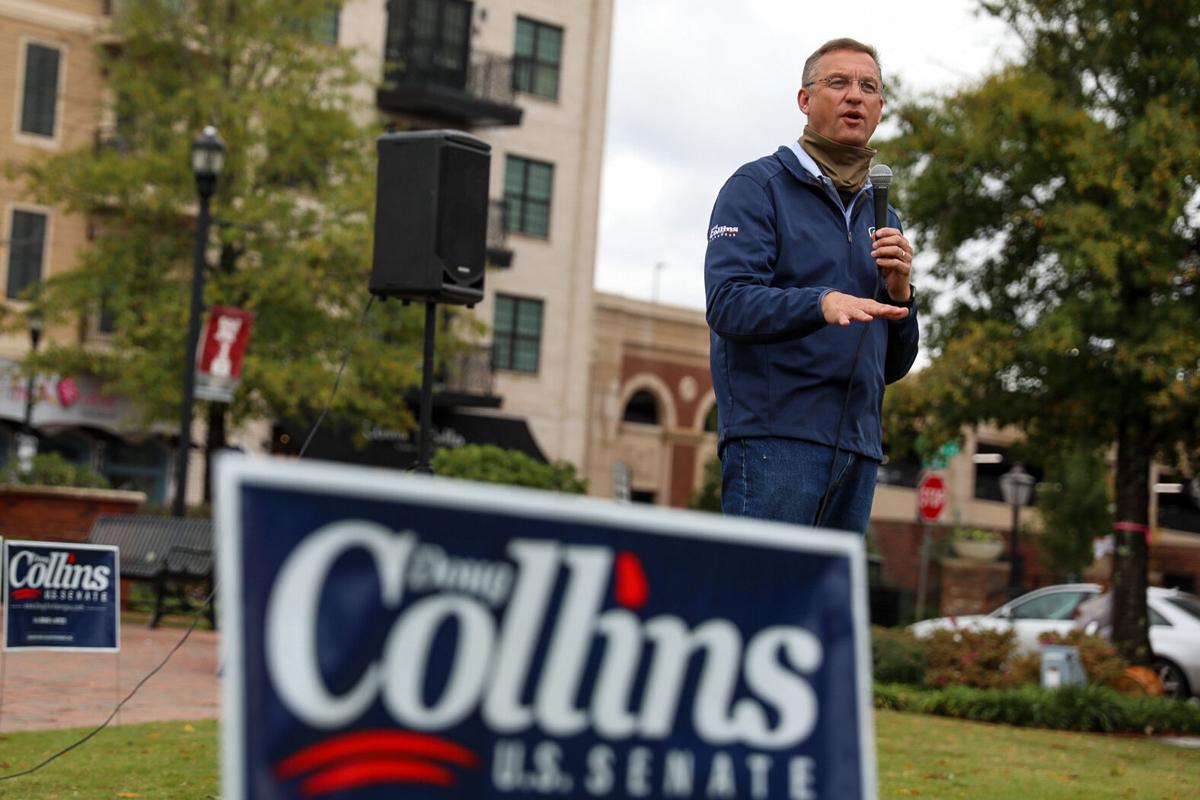 ATLANTA — In the final stretch before Election Day, Georgia airwaves are flooded with political ads, mailboxes stuffed with fliers, and top candidates are embarking on their final statewide tours in a last-ditch effort to win votes.

With two Senate seats in play, Georgia Democrats are eyeing their chance to flip Congress. But GOP candidates are hitting back by campaigning with far-right rhetoric in hopes of pushing more Republicans to the polls.

At the same time, incumbent and self-proclaimed “original outsider” U.S. Sen. David Perdue is under pressure from the young Democrat Jon Ossoff who has proclaimed his bid a “war against corruption” in Congress.

Candidates in both races have seen close polling numbers during the past few months — the contest between Perdue and Ossoff particularly tight — similar to the near draw for Georgia’s electoral seats between President Donald Trump and Democratic presidential nominee Joe Biden.

An Atlanta Journal-Constitution poll solidified the neck-and-neck polling numbers in the presidential and both Senate races. The results released Monday showed Joe Biden at 47% and Donald Trump at 46% — well within the 4% margin of error.

Incumbent Perdue is polling at 45% while Ossoff had 46% of the vote.

In the special election, Warnock is leading with 34% while Loeffler and Collins were essentially tied at 20% and 21%. In order to win the race outright, a candidate would have to garner 50% plus one vote, an unlikely outcome. If no candidate exceeds the 50% threshold, the top two vote getters will head to a Jan. 5 runoff election.

Incumbent Perdue has mirrored President Trump's rhetoric, pledging throughout his campaign to fight a “radical socialist agenda” he claims his opponent and the Democratic party as a whole are pushing.

“What kind of America do you want?” Perdue asked to voters during an interview with CNHI. “Do you want a socialized state where the state tells you when and how and how much you're going to get health care? You want to stay determining whether you can have a small business or not? Or do you want a free market system?”

In the Senate special election race, Loeffler and Collins have been locked in a battle for the most conservative title since Gov. Brian Kemp bucked the president’s appointment preference of Collins and went with Loeffler to fill the remainder of the term.

Loeffler’s appointment was widely recognized as an effort to boost support among moderate women, but since she has veered far right in an effort to win over extreme Republicans. During multiple statewide tours, Loeffler boasted a strong anti-abortion stance, her pro-Trump voting record and efforts to “hold China accountable” for its role in the COVID-19 pandemic.

“As an outsider to politics as a successful businesswoman, I went to work for Georgians,” Loeffler told CNHI. "I rolled up my sleeves and said we're going to get work done. We're not going to be distracted by politics. I think in Washington, you see a lot of this swampiness that goes on — the political games. It's disgusting.”

Loeffler said she speaks up for Georgians "who feel like being a conservative is under attack.” Her campaign has gone as far as garnering the endorsement of controversial congressional candidate Marjorie Taylor Greene. Greene is at the center of national news for being an open supporter of the conspiracy theory QAnon and having a history of controversial remarks.

Loeffler has shied away from addressing the controversial ties, stating during an Atlanta Press Club debate that she “doesn’t know anything about QAnon."

Her top Republican opponent, Collins, on the other hand denounced QAnon during the debate.

Collins' bid for the Senate seat was initially criticized by members of his own party. But he became a face for Georgia during the Trump impeachment proceedings in the House, and throughout his campaign has pointed to his record in Congress, saying it proves he is the most “authentic” Republican in the race.

The Gainesville native has received backing from rural leaders as well as House Speaker David Ralston who has hit the campaign trail with Collins.

The battle between Collins and Loeffler has created an opening for Georgia Democrats, with Warnock climbing in the polls during the past few weeks — the outcome of the Nov. 3 election is almost certain to lead to a runoff.

Warnock reminded an enthusiastic crowd that the number of new voters since 2018 has skyrocketed — many Black voters or under the age of 30.

"So, we say to America: witness, the new South," he said. "Georgia is the tip of the spear of a new South — that is more inclusive that is bold that is forward-looking — and we're ready for change."

After the questionable and laissez faire pandemic response by the Trump administration, Georgia Democratic candidates in both Senate races are sticking to health care and the ongoing COVID-19 crisis as their top issue in the final days of campaigning.

Georgia’s coronavirus cases, in line with the country, have started to rise again as winter months near, keeping the pandemic a key talking point during debates from the top to the bottom on the ticket. Georgia Republicans have refused to critique the president’s response to the pandemic and pundits think they may pay the price for it at the polls.

Ossoff — whose wife Alisha Kramer an OB-GYN at Emory University — has accused his opponent, Perdue, of downplaying the severity of the pandemic to Georgians like the president himself.

“We've got to protect families' access to health care and invest in making health care more accessible and more affordable for everyone,” he said. "We need to protect coverage for people with pre-existing conditions. We need to empower medical experts to lead on the response to this pandemic."

After her confirmation to the Supreme Court Monday, how new Supreme Court Justice Amy Coney Barrett votes could change the future of the Affordable Care Act, a concern Democrats have voiced throughout the appointment process. Ossoff warned voters the final impact of the pandemic and protections for preexisting conditions are on the ballot in this election.

Warnock said the death of Justice Ruth Bader Ginsburg added “a layer of urgency” to this particular race. If he can garner more than 50% of votes on Nov. 3 and avoid a runoff, he said, he’d head to Congress immediately where he may have the chance to weigh in on health care issues and further federal response to the pandemic.

"Several months into this crisis we still don't have a national strategy,” he told CNHI. "And it's the American people and the people of Georgia, who suffer as a result of that."

The pastor has climbed in the polls despite two Democratic challengers giving him a run for the seat: candidates Ed Tarver and Matt Lieberman. Since, high-profile Democrats such as Stacey Abrams have called on the party to rally around Warnock, giving him a swell of support.

Biden endorsed both Ossoff and Warnock Monday ahead of his visit to the state.