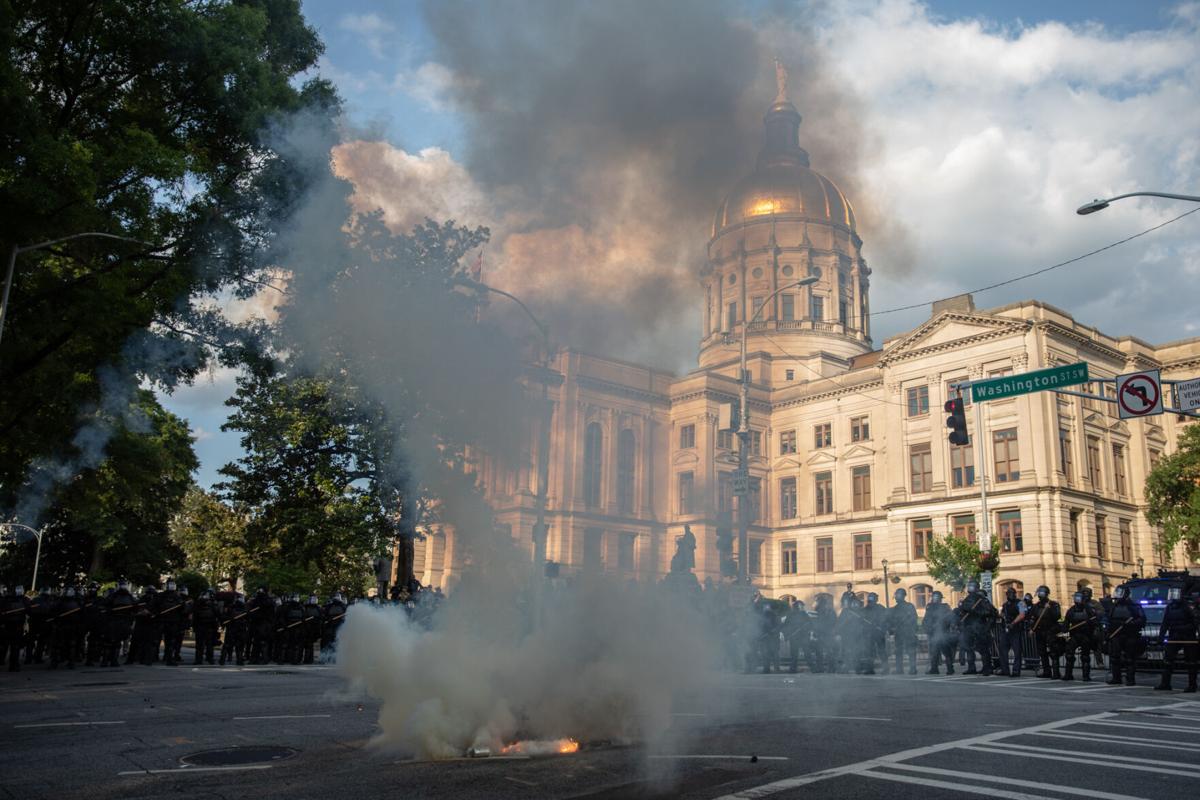 A cloud of tear gas billows in front of the Georgia State Capitol building on June 2 in Atlanta. 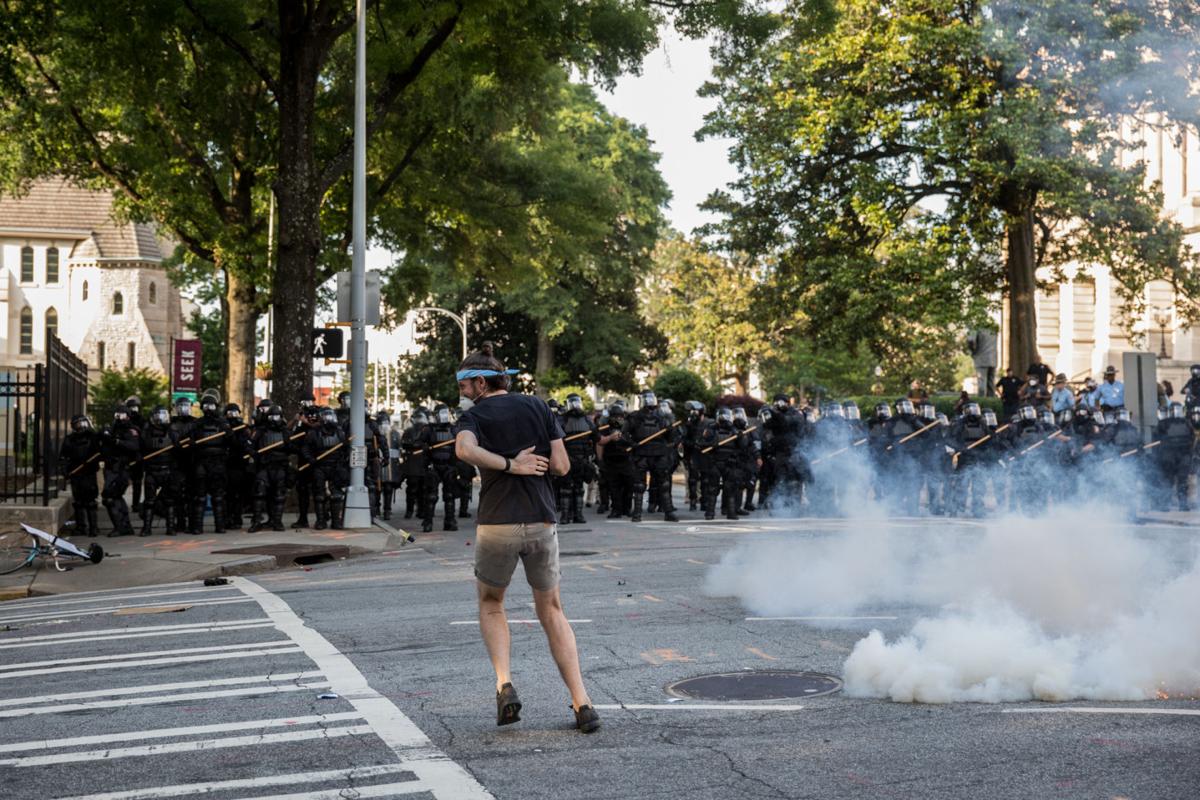 A protester runs from a tear gas canister at the Georgia State Capitol building on June 2. 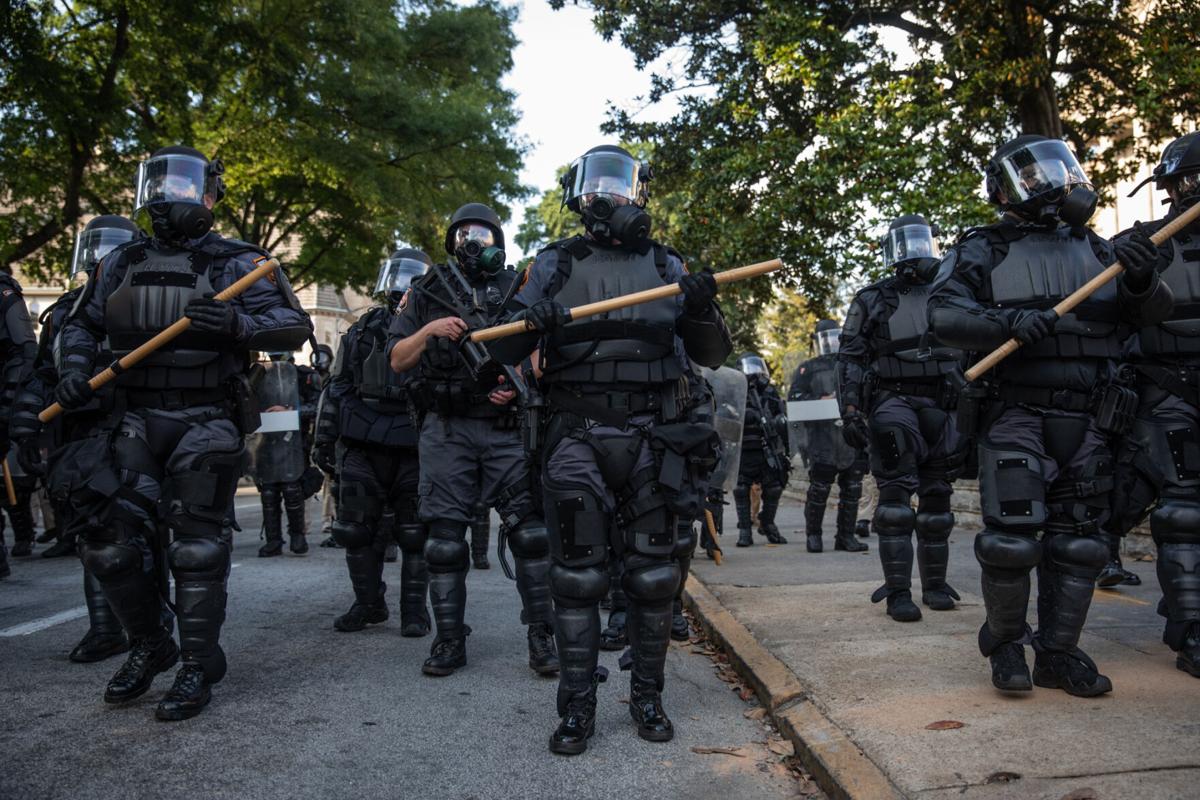 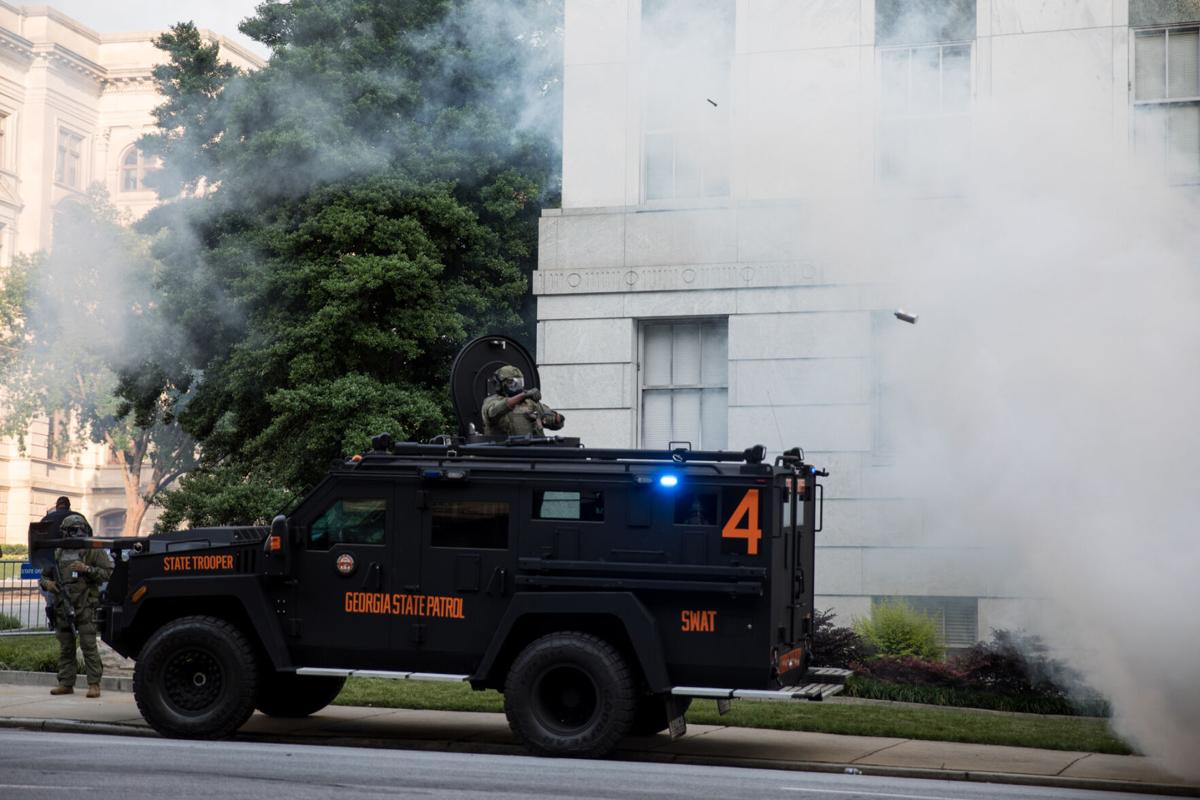 A Georgia State Trooper lobs a tear gas canister at protesters from the top hatch of a SWAT vehicle on June 2. 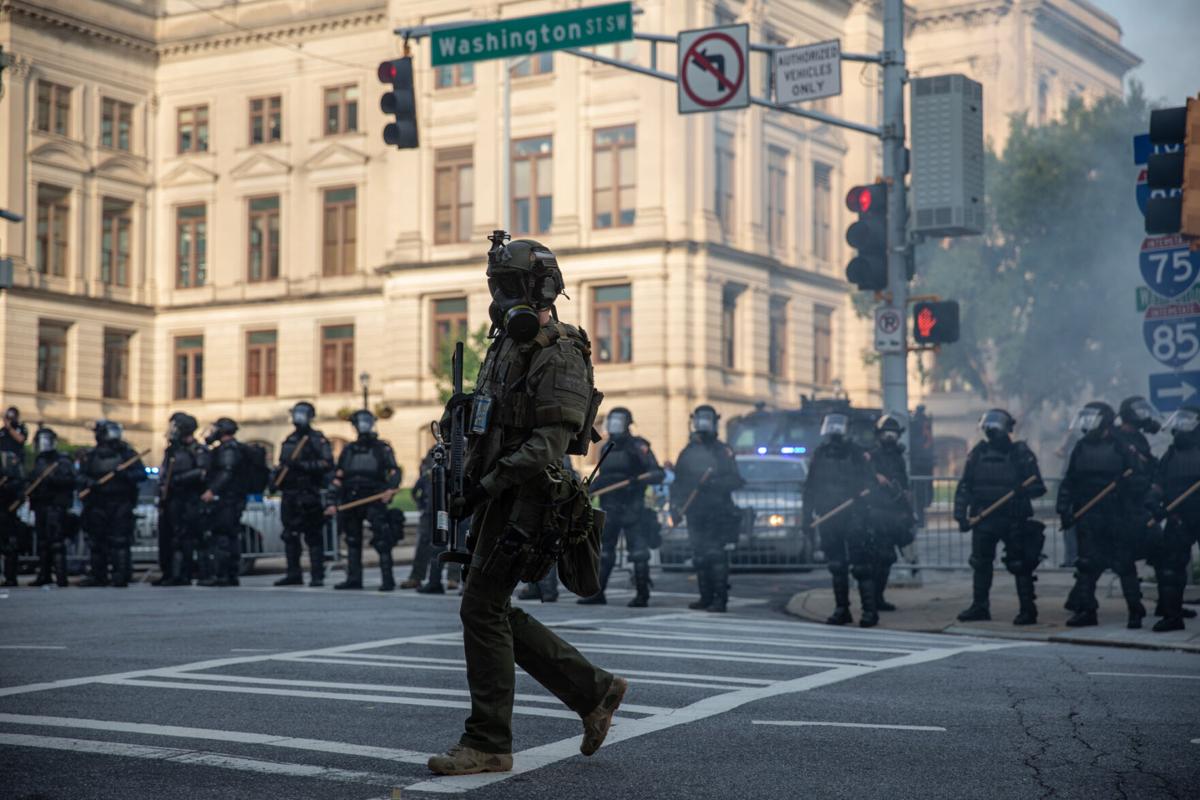 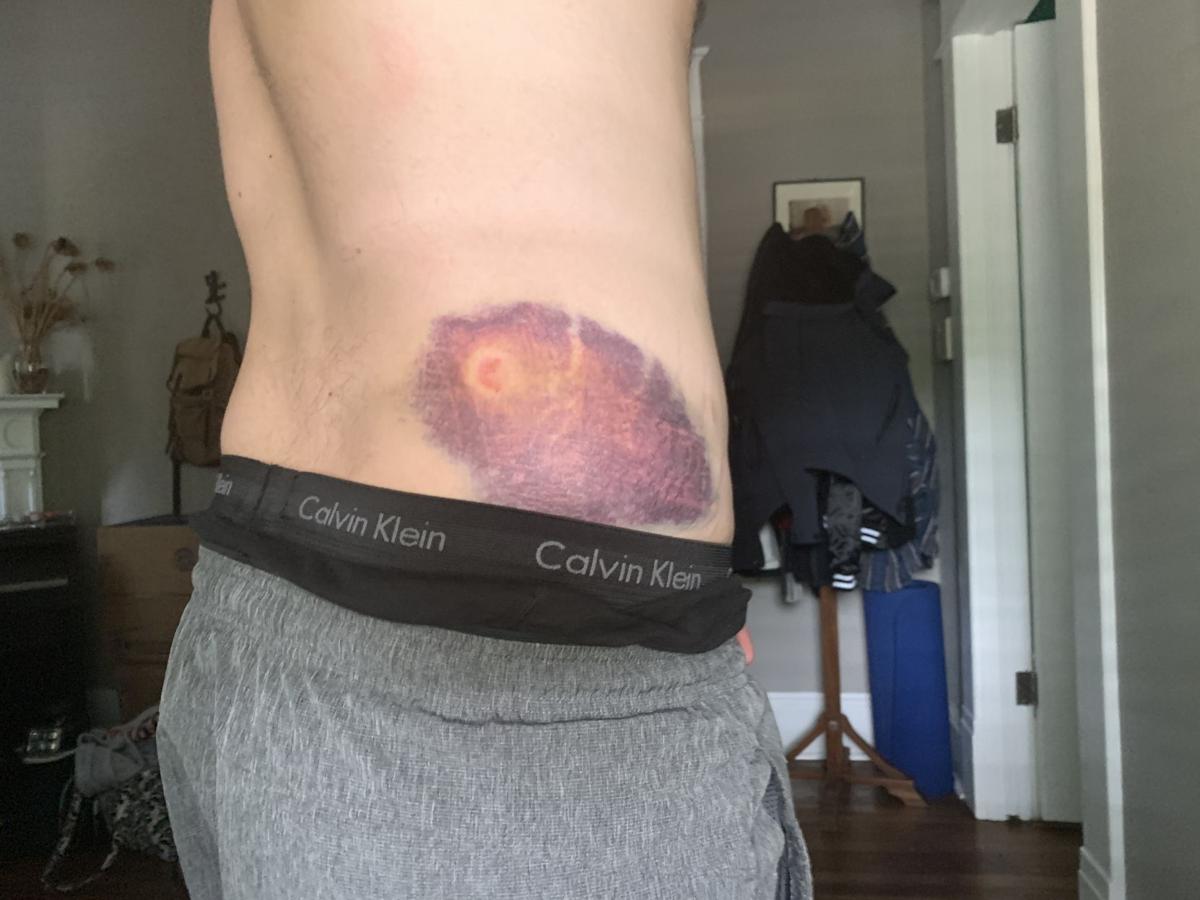 David Luse's wound three days after being shot with a rubber bullet by law enforcement at the Capitol on June 2.

A cloud of tear gas billows in front of the Georgia State Capitol building on June 2 in Atlanta.

A Georgia State Trooper lobs a tear gas canister at protesters from the top hatch of a SWAT vehicle on June 2.

ATLANTA — When tear gas and rubber bullets were used against non-violent protesters by Georgia law enforcement at the Capitol, it left Atlanta protesters confused and bewildered.

The incident — observed by CNHI — was without provocation and happened hours before a city curfew.

Shortly past 7 p.m. Tuesday June 2, police officers guarding the State Capitol building donned gas masks and wielded wooden batons. An officer called out with a bullhorn for protesters to disperse.

The crowd of protesters had been peacefully protesting in Washington Street. Although many who were pressed up against a police line were yelling at the officers.

At the sight of the gas masks, protesters chanted “we are not armed” but began to scatter.

Rows of officers in riot gear began to corral the crowd one direction on the street. From the hatch of a SWAT vehicle, a state trooper lobbed tear gas canisters. Another advanced forward shooting rubber bullets at the retreating protesters.

The scene was a far cry from the march of hundreds of peaceful protesters taking place in downtown Atlanta shortly before. The demonstration escorted through the streets by law enforcement — begging the question as to what caused the use of chemical agents and rubber bullets at the Capitol?

David Luse was shot in the back with a rubber bullet as he ran away from tear gas down Mitchell Street at 7:11 p.m. The bullet, he said, was "piercing" and likened it to falling on a spike.

"It was one of the worst experiences of my life," he said. "I was naive. We were all complying, we were all peacefully protesting. I thought there's no way anything could happen two hours before curfew. I was naive and paid the price."

Luse said most marchers were headed back to Centennial Olympic Park before officers asked them to move out of the street onto the sidewalk. As protesters started to crowd onto sidewalks, officers in riot gear began pushing them toward the intersection.

Many abandoned personal belongings as they scrambled to get out of the way — protest signs and even bikes.

"Even if there were people in the street," he said, "there's no reason for them to start firing tear gas and rubber bullets at peaceful protesters."

Luse hid behind a tree and filmed what he could of the scene before he was hit by the bullet within 20 feet of the officer firing.

The bullet left a large bruise across one side of his lower back.

Hannah Riley, who arrived at the protests about 15 minutes before gas was deployed, said she did not see any provocation — protesters were yelling at officers, she said, but "that's not illegal."

Riley said the officer on the lawn of the Capitol telling protesters to disperse through a bullhorn was nearly impossible to hear. When gas masks came on, it was "chaos," she said. The crowd began to run.

"I really can’t believe that no one was trampled," she said.

'Required by the situation'

In the first eight days of protests, more than 530 arrests were made, according to the Atlanta Police Department.

But on June 4 and 5, the days ended peacefully — with no use of tear gas at night — prompting Atlanta Mayor Keisha Lance Bottoms to do away with the weekend curfew.

Adj. Gen. Thomas Carden walked through the crowd of protesters at the intersection of Centennial Olympic Park Drive and Marietta Street on Friday, June 5, the first time he’s stepped beyond the law enforcement line since protests began.

The night before was one of the first where tear gas and other crowd-control agents were not used to disperse the crowd gathered downtown once the mandated curfew hit at 9 p.m.

“I did not go to bed with tear gas in my lungs,” he said.

Carden told CNHI generally, no law enforcement agency will use tear gas and other “non-lethal” deterrents unless “it’s required by the situation.”

“When I’ve seen it used out here before,” he told CNHI, “they didn’t have a choice.”

At a few points during protests, some in the crowd have shot fireworks at police “essentially using it as a weapon,” he said.

“It is very difficult for law enforcement officials to delineate at that point between who's a peaceful protester and who's really trying to shoot you with a flame,” he said. “Those are the things that I've seen trigger the use of of non-lethals.”

When there is a crowd the size Atlanta experienced during protests, he said, “it’s a tall order” to control it.

The description aligns with instances where tear gas was used when protesters threw rocks, water bottles and other items and launched fireworks at law enforcement downtown earlier in the week — but not with the scene outside of the Capitol building on June 2.

Lt. Stephanie L. Stallings, spokeswoman for the Department of Public Safety, said when any form of force is used — "lethal or less lethal," an incident report is completed.

"All of the incident reports from the most recent protests are not completed yet," she said in an email.

According to department policies, "less-lethal munitions may only be used when use is objectively reasonable in response to instances that threaten the safety of the member or others, the destruction of property, or in response to a civil disturbance."

Watchers on the ground

The Georgia American Civil Liberties Union has sent out dozens of volunteer "legal watchers" to protests across metro Atlanta to observe protests and document possible infringements on First Amendment rights. Watchers are not allowed to take part in the protests or interact with demonstrators or law enforcement.

Christopher Bruce, political director for ACLU Georgia, has been on the ground with volunteers since early last week and noted many protesters have been met with aggression from police.

The most notable instance in Atlanta when two college students on their way home were pulled from their car, tased and arrested by police.

While some officers have had positive interactions with protesters — often engaging in cordial conversations at the line — this is not the majority of the time, Bruce said. Observers have seen police "harass" and "intimidate" protesters.

Even though officials look at curfew nights that didn't end in tear gas as a step forward, Bruce said, protesters would still be there if they could.

"People would still be here in their streets, in their city, if they didn't have didn't have tear gas and rubber bullets shooting at them," he told CNHI.

Bruce said in early days of watching the protests — even in a clearly marked "legal observer" vest — he feared for his safety, highlighting the very core of the movement.

"The reason why people are down there," he said, "is that they're very concerned about ways that the police treat others."