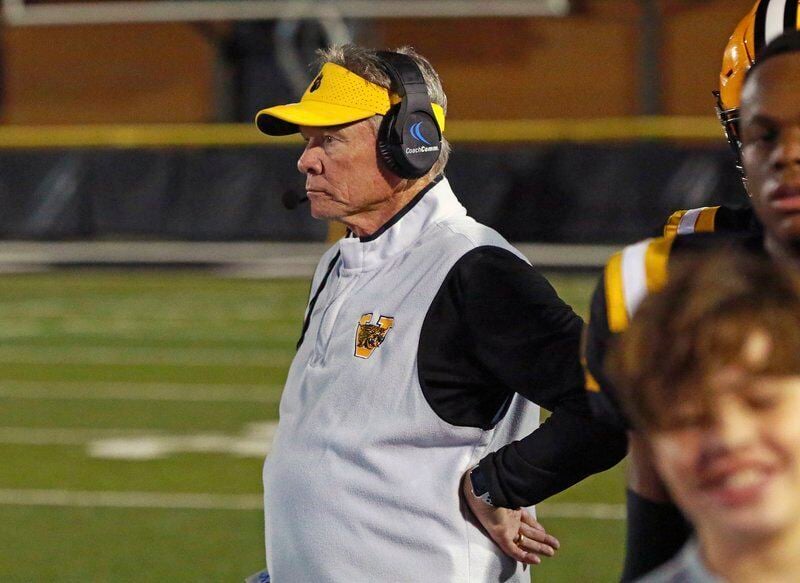 Valdosta head football coach Rush Propst looks on from the sideline during the third quarter of a GHSA Class 6A playoff game against Lovejoy on Nov. 27, 2020 at Bazemore-Hyder Stadium. Valdosta defeated Lovejoy 52-14, marking Propst’s 300th career victory and the 79th playoff win of his career. 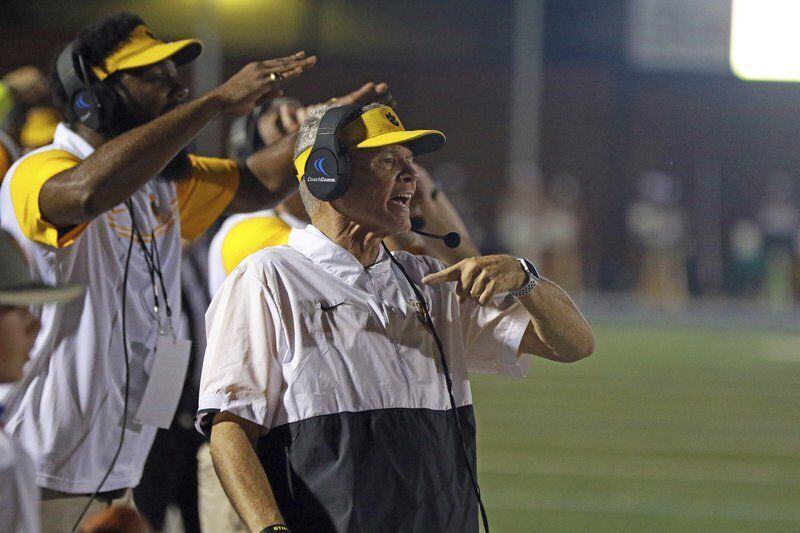 Valdosta head football coach Rush Propst looks on from the sideline during the third quarter of a GHSA Class 6A playoff game against Lovejoy on Nov. 27, 2020 at Bazemore-Hyder Stadium. Valdosta defeated Lovejoy 52-14, marking Propst’s 300th career victory and the 79th playoff win of his career.

VALDOSTA — Valdosta High‘s football coach Rush Propst is no stranger to the spotlight and is continuing to make national headlines — but not in a good way.

The Valdosta Board of Education meeting Tuesday evening drew a bit of a crowd but Propst was not a topic of discussion nor has the board publicly discussed the controversial coach.

Now, in the wake of the Propst controversies that include allegations of unauthorized "recruiting," the storied Valdosta Wildcat football program is facing fines and possible probation.

His employment with VHS began with many fighting to keep former Valdosta coach Alan Rodemaker from being ousted after years with the program.

However, a school board majority voted to effectively remove Rodemaker by not renewing his contract and eventually voted to hire Propst April 14, 2020.

Propst led Valdosta to a 7-5 record in 2020 and in the team's first round playoff win against Lovejoy, Propst notched his 300th career win.

The 'Cats advanced to the Class 6A state semifinals for the first time since 2016 before bowing out to eventual state champion Buford last December.

In the months since the 2020 season ended, Propst came under fire after allegations surfaced from a 64-page deposition in the wrongful termination lawsuit filed by the Rodemakers against the Valdosta Board of Education.

Among the claims made in the deposition, money intended for advertising was personally pocketed, tampering with the coach search that hired Propst and requests for "funny money" to pay rent for recruits and their families to stay in Valdosta.

A YouTube video of a recorded conversation between Propst and former Valdosta Touchdown Club president Michael "Nub" Nelson from May 16, 2020, surfaced. In the recording, Propst makes claims of recruiting schemes carried out by the likes of Georgia's Kirby Smart and Alabama's Nick Saban, among others.

Propst claims Georgia paid former star running back Nick Chubb $180,000 to return for his senior season. To which, Chubb responded on Twitter: "If i needed money i would have went pro #fakenews"

Propst was placed on administrative leave March 9, according to documents in Propst's Valdosta City Schools personnel file obtained through an open records request filed by The Valdosta Daily Times.

On March 11, the Georgia Professional Standards Commission confirmed it has received a formal complaint from Valdosta City Schools regarding Propst. The PSC's investigation into the complaint was launched April 9 and is currently ongoing.

On April 8, the GHSA sent a letter of recommendation to Valdosta City Schools Superintendent Dr. William Todd Cason. The letter outlines sanctions being placed on the Valdosta High School football program: Five players ruled ineligible to play in the state of Georgia for a calendar year, forfeiture of all wins during the 2020 season, a $7,500 fine ($1,000 for each ineligible player, plus $2,500 for lack of institutional control) and probation for the 2021 season that includes a postseason ban.

According to GHSA Executive Director Robin Hines, Valdosta is appealing the recommendation.

In an interview with ITG Next's Phil Jones, Propst expressed he wants to see the process play out and hopes to see the Valdosta Board of Education aggressively appeal the GHSA's recommendation. Propst also said once the appeal process runs its course, the evidence will produce a favorable result for him and the Valdosta Touchdown Club.

Prior to being hired at Valdosta, Propst had agreed in principle to become the head coach of upstart program USA Academy in his home state of Alabama on Jan. 2, 2020.

However, just eight weeks into his tenure, Propst stepped down from the position, citing “a variety of factors outside of my control” as his reason for leaving the school.

Propst, who had long been rumored to have interest in the Valdosta head coaching position, reached a settlement to reinstate his Georgia teaching certificate on March 12, 2020 – a move that paved the way for him to pursue a new coaching position in Georgia.

In March 2019, Propst was fired at Colquitt County amid allegations of ethics violations – a recurring theme dating back to his time at Hoover (Ala.) that saw him resign over questions of impropriety.