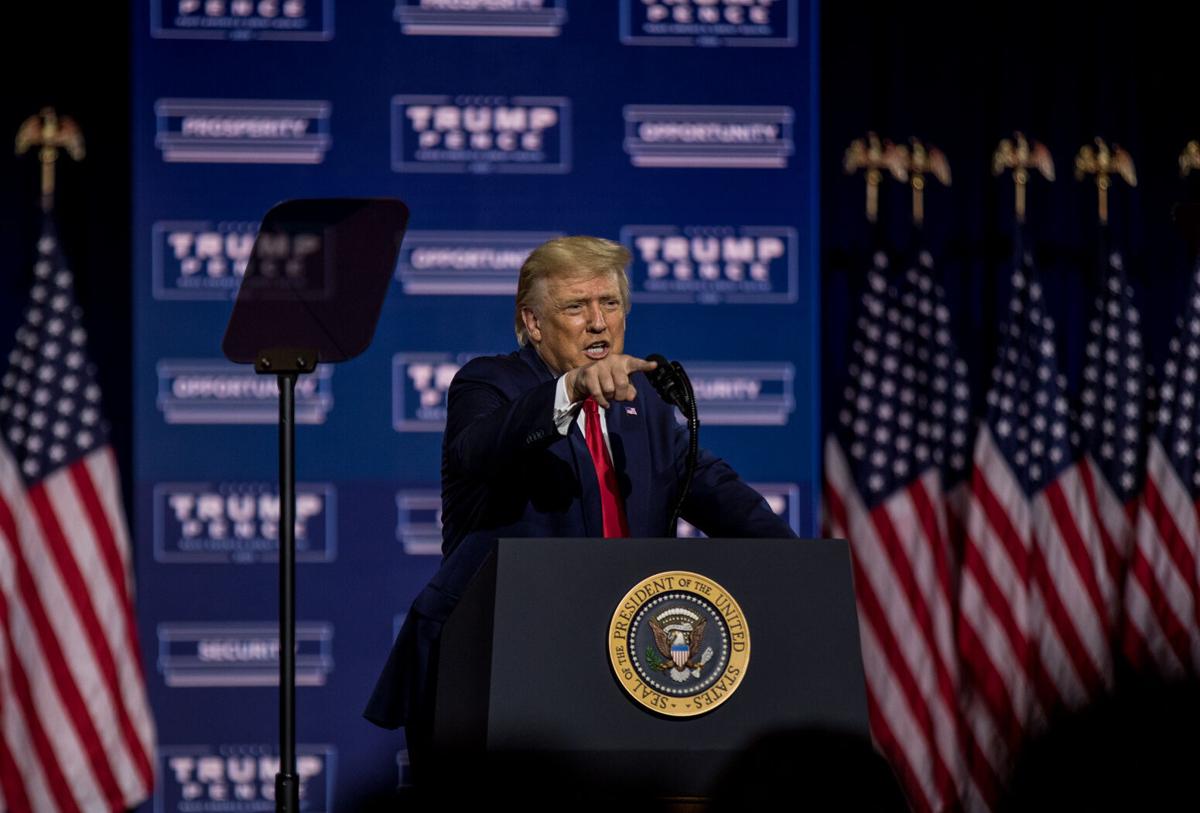 President Donald Trump rallies supporters at a Black Voices for Trump event in Atlanta on Sept. 26. 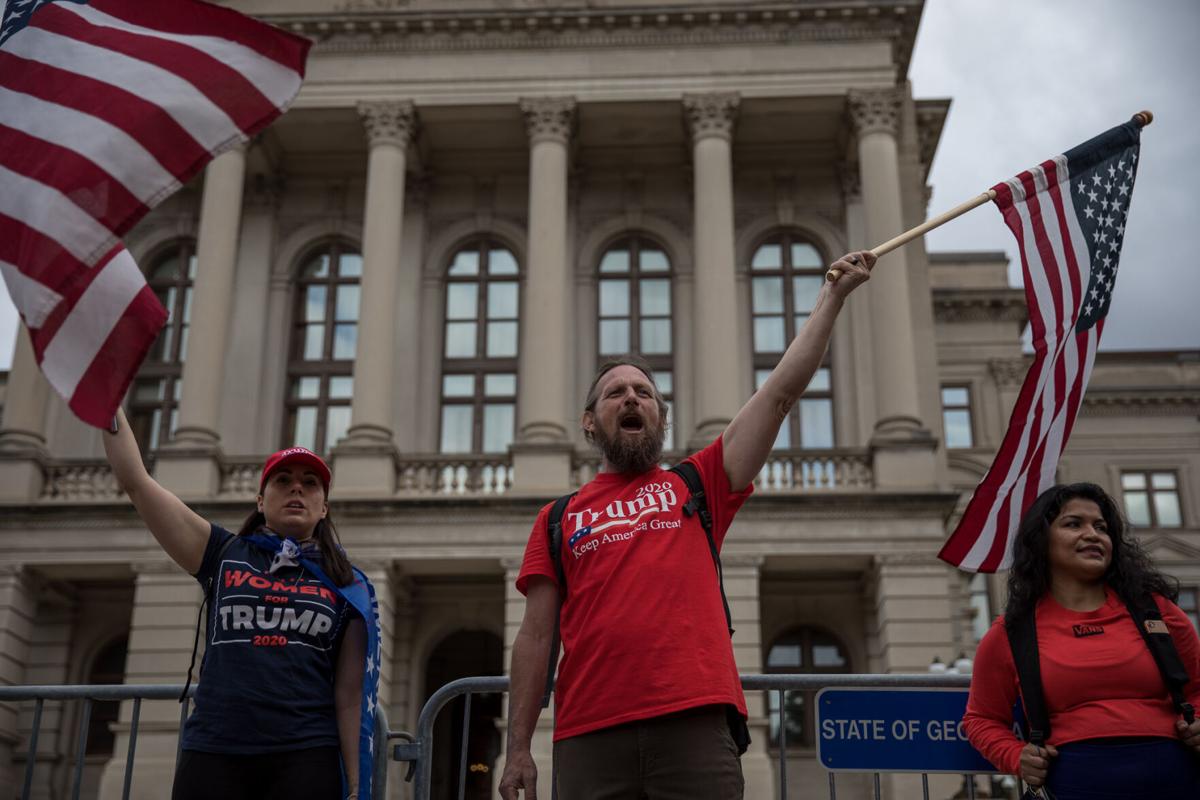 Trump supporters rally outside of the Georgia State Capitol after Biden was declared the next president on Nov. 7.

ATLANTA — As President Donald Trump continues painting himself a false victim of a derailed election, the Georgia Secretary of State’s office has likened its war against rampant election disinformation to an unrelenting game of “Whac-a-Mole."

During a routine press conference Tuesday, Gabriel Sterling, statewide voting implementation manager, had enough and called out Trump and Georgia's Republican senators for being "complicit" about the anger and potential violence related to the election in Georgia.

The outburst came after nearly a month after Election Day – at a time when Peach State Republicans have been torn between those who fuel Trump's lies and dangerous rhetoric and those — only a few — who refuse to repeat or support the false claims.

But not only has Trump driven a political wedge between Georgia GOP members — Republican U.S. senators have called for Secretary of State Brad Raffensperger’s resignation while state officials have remained quiet — but now the party faces the real threat that infighting could impact base turnout.

Conspiracy theory experts say it is historically normal for a large portion of supporters of the losing party to believe that the outcome was fraudulent but Trump has set a new precedent for an American president pushing conspiracy theories.

The secretary of state's office has apparently made a dramatic shift in its strategy to combat misinformation from singling out individual falsehoods to calling out the source — Trump himself; Raffensperger went as far as reading one of the president's tweets verbatim.

At the lectern Wednesday, Raffensperger said he fully supported Sterling's remarks and Trump and his legal team are "exploiting a lack of understanding" about the election process.

"Gabriel Sterling's call was a call for decency," Raffensperger told CNHI. "People have to decide, are you going to be a decent person? Or are you going to just be over the top? I think people need to hold themselves accountable individually. Because at the end of the day, if you can't manage yourself, then society degenerates very quickly — and that cuts on both sides of the aisle.”

Uscinski, who also is co-author of the book "American Conspiracy Theories," said Trump and high-ranking Republicans are taking advantage of a culture that has existed for years.

In surveys prior to elections, Uscinski asks the question if the voters preferred candidate doesn’t win, how likely do you think fraud was involved? The results, he said, are typically about 40% of respondents, consistent on both sides of the aisle.

“It's a regularity that some amount of losers after elections will feel like they were cheated. You can look at almost every presidential election in which polling has been done afterwards and find a substantial chunk of people on the losing side who think that it was rigged against them,” Uscinski told CNHI. "Because it's much easier to do than it is to look in the mirror and say, well, we didn't have a good candidate or ideas aren't that good or we didn't campaign hard enough. It’s much easier to say it was rigged.”

The idea that the disinformation is “spreading” across Trump supporters is not necessarily accurate, he said. A lot of his supporters believed these conspiracy theories, anyway, but Trump is further exploiting their beliefs.

“Where the real spreading is happening now is that President Trump and his associates are pushing voter fraud conspiracy theories. And that is influencing a fairly large number of Republicans to believe that it was rigged,” Uscinski said. “So, we have even more Republicans believing at this time because of Trump's involvement in pushing that narrative. That's very much a Trump effect.”

"Fighting information is like punching in the air," he said.

Georgia's Secretary of State's Office has been doing just that.

"Every time we knock down one, there’s a new crazier one,” Sterling said. "We are doing our best to be transparent and address these charges because there are people out there who people respect and are believing these things.”

One of those people is the president who’s initiated an all-out war on  Raffensperger — a Republican — and now former ally Gov. Brian Kemp — also a Republican. Trump and his legal team have flooded social media and Georgia courts with half-baked conspiracy theories and unfounded allegations against the state’s far-right Republican officials.

But their efforts haven't made a difference. Caravans of cars circle Raffensperger's house regularly. Raffensperger's wife receives "sexualized death threats" via text messages. A young tech for the Dominion voting system has his name pinned to a photo of a noose circling social media.

"Be the bigger man here," Sterling pleaded with the president. "Step in. Tell your supporters: Don’t be violent. Don’t intimidate. All that’s wrong. It’s un-American.”

"I’m ashamed I endorsed him,” Trump said of Georgia’s Republican governor during an interview on Fox News this week. While halfway out the door of the White House, Trump urged Kemp to use “emergency powers” to intervene in the third recount — requested by Trump — of Georgia’s some 5 million ballots cast in the presidential race.

Kemp’s office responded by stating “Georgia law prohibits the governor from interfering in elections” and Raffensperger has ultimate oversight.

"As the governor has said repeatedly, he will continue to follow the law and encourage the Secretary of State to take reasonable steps – including a sample audit of signatures – to restore trust and address serious issues that have been raised,” Cody Hall, spokesman for Kemp, said.

“Brian Kemp has no superpowers as governor to supersede the decisions of the secretary of state,” he said. "If you’re going to allege bribery, fraud, etc. — you know I was an elected Republican for 18 years — but please show me some evidence … some evidence would be appreciated.”

The wave of unsubstantiated claims being pushed by high-profile Georgia Republicans, including U.S. Sens. David Perdue and Kelly Loeffler who face runoffs in a matter of weeks, have burrowed deeply into the minds of Trump supporters in Georgia leading to ongoing protests at the state Capitol.

"Once this recount is complete, everyone in Georgia will be able to have even more confidence in the results of our elections, despite the massive misinformation that is being spread by dishonest actors,” the Republican secretary of state said Monday. "There are those who are exploiting the emotions of many Trump supporters with fantastic claims, half-truths, misinformation and frankly, they are misleading the president as well, apparently.”

Trump’s social media rants are creating a troubling scenario for Perdue and Loeffler: possibly losing their races if distrust in the election process keeps would-be voters from voting.

“The issue is this can in fact suppress Republican votes come Jan. 5,” Olens said. "The only suppression of votes occurring now are the president's tweets discouraging Republicans from voting for Kelly and David on Jan. 5 and I think that’s very detrimental for their races.”

Raffensperger told CNHI that as a Republican, he too is concerned that "all this rhetoric is going to depress the Republican turnout."

“Disunity always destroys and unity always builds. … If President Trump has hired lawyers that have this strategy of just saying stuff with not even any regard to the truth but it makes for a good soundbite then that's the kind of people he's hired. But let's focus as Republicans on the runoff election."

Georgia has become the center of the political universe with both U.S. Senate races ultimately deciding which party holds power in the upper chamber in Washington, D.C. While Republicans likely breathed a sigh of relief at the news Trump would be rallying for Perdue and Loeffler in Georgia this weekend, his performance at that rally could have a major impact on the outcome of the contests.

The appearance will either end up “helping or hurting” the Senate candidates, Olens said.

Uscinski said the concern of Republicans is not without merit, but claims of voter fraud could possibly also have the opposite impact on voters and inspire them to turnout at the polls.

Still, he said, there’s nothing really comparable to Trump’s rampage after the election.

"I don't have a lot of U.S. Presidents to compare him to in terms of spreading massive conspiracy theories about their own electoral loss,” he said.