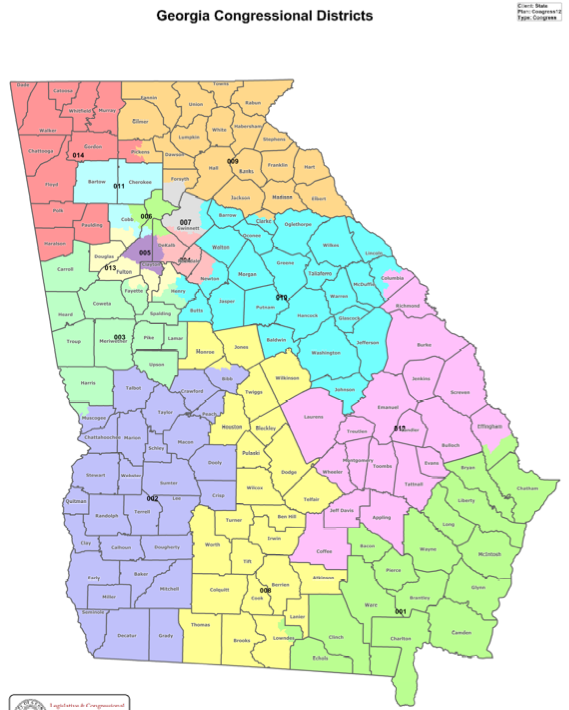 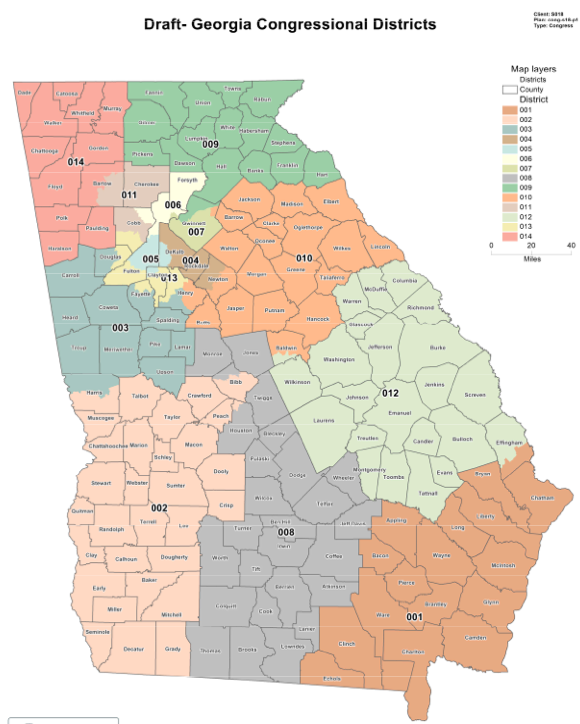 Georgia's current congressional districts as of 2020

Georgia's current congressional districts as of 2020

State Rep. Erica Thomas, D-Mableton, whose seat lies within District 14 said her constituents — largely minorities — are against the shift, citing differences in values of north Georgians.

“Even if 100% of them come out to vote, they will never get the representation that they vote for. They have been paired with a district that does not look like them, or share the values of them,” Thomas said at the Georgia House’s Legislative and Congressional Reapportionment hearing. “Why split and dilute the voting power of people of color in West Cobb and put them in a district that is so clearly where they don't belong? They would like a representative that looks like them or even a representative that represents the values that my district has.”

Austell resident Leroy Hutchins added, “We are in Cobb County but we very much look like Metro Atlanta and the ideals that we have are representative that some of the things that we focused on — with Six Flags being right there in our back door — is tourism and transportation. But the (proposed) map the way it looks, would be more focused on agriculture and more rural opinions versus what we're looking at here in the southern portion of the county.”

“In the sixth district, which was only about 650 people overpopulated, over 45% of the voters in that district were moved out,” he said. “Now you can't fix it by just moving 650 people you're going to have to move more but I have a hard time buying the idea that you're maintaining the core of that district when almost half of it is being moved out, when only a tiny, tiny percentage needed to be moved to equalize the population."

He said the same kind of unnecessary shifting is part of the proposed Congressional District 7 —  also held by a Democrat, Carolyn Bourdeaux. The district is currently over populated by more than 10% — or 94,000 people — but 49% of its voters were moved into a different district in the proposal.

Since the last redistricting cycle in 2010, the state’s population grew 10% — by 1 million people — and all of it in minority populations.

Currently, eight of 14 of Georgia’s U.S. Representative seats are held by Republicans. The state’s two U.S. Senate seats were won by Democrats in 2020 and the majority of the state voted for Democrat President Joe Biden.

“Unfortunately, the majority's proposal provides it with a significant Republican advantage that fails to reflect the preferences of Georgia voters in a state that is equally divided politically, a map that provides either party a significant partisan advantage,” said Sen. Gloria Butler, Democratic Minority Leader during the Senate committee meeting. “Their map discriminates against and reduces the voting power of Georgians with different political viewpoints.”

Despite opposition to the new proposed districts, Republicans have defended the proposal, saying that it meets redistricting requirements and complies with the Voting Rights Act.

State Sen. John Kennedy, R-Macon, asserts that some splitting of areas and precincts is inevitable in order to meet population requirements.

Much of Georgia’s population growth occurred in metro areas of Atlanta, causing south districts to shift more northward, he said.

“You'll note that the same phenomenon, if you will, that we had with regard to the (state) Senate district maps and having to make up population deficits in the southern part of the state that had an accordion effect of pushing the districts northward," said Kennedy, chair of the Senate Reapportionment and Redistricting Committee. "You'll see the same effect going in the congressional maps. You'll also see the same across the northern tier, coming south for population drivers as well.

“We've got our traditional districts in the corners of the state and the cores of existing districts that are largely maintained in the map that you have," Kennedy continued. "While incumbents don't have to live in their districts for Congress, every incumbent member of the Congress has a district to run in.”

The map was approved in the Senate Nov. 19. The House Legislative and Congressional Reapportionment Committee will have an in-person and virtual meeting 9-11 a.m., Nov. 20. The map must be approved in both chambers and signed by the governor to become effective.

For more details on how to sign up to speak and view the House committee meeting, visit https://www.legis.ga.gov/committees/house/114.