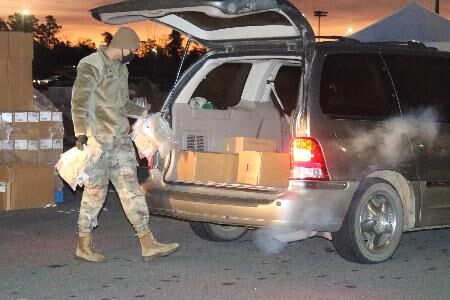 Spc. Duncan Canady of the Georgia Army National Guard loads food bags into the trunk of a car for a resident during Second Harvest of South Georgia's food distribution Saturday at Valdosta High School. 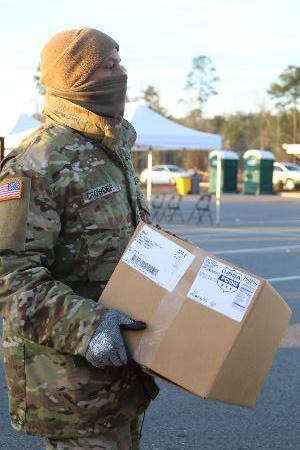 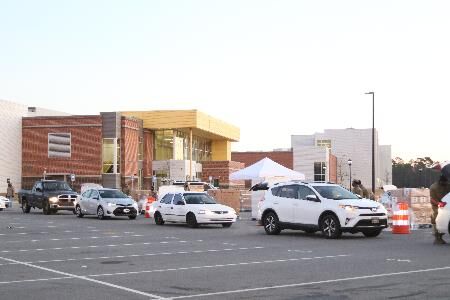 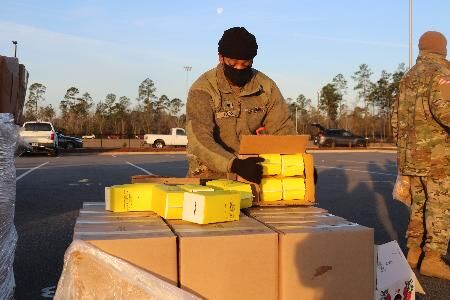 Spc. Duncan Canady of the Georgia Army National Guard loads food bags into the trunk of a car for a resident during Second Harvest of South Georgia's food distribution Saturday at Valdosta High School.

VALDOSTA – The air was frigid. Sunlight had yet to appear. But for residents who had been outside of Valdosta High School since 3 a.m. Saturday, the unforgiving temperature didn’t matter.

In the wee hours of the morning, hundreds of cars formed a single line wrapped around the school.

People sat in their cars waiting for Second Harvest of South Georgia to begin its first Valdosta food distribution of the year.

Forty members of the Georgia Army National Guard stood ready at food pallets as they prepared to serve the community.

Second Harvest has consistently worked throughout the pandemic to combat hunger within the local community.

Agency staffers said their distributions during the pandemic have had to be held on a larger scale than usual.

The nonprofit took a survey in December and realized some of the 2020 food recipients were first-timers.

“About 40% of the folks coming through the line today would probably be people that have never been to one of our food giveaways before,” Frank Richards, agency chief executive officer, said.

The pandemic and current economy are driving newcomers to the food bank, he said.

"We’re seeing a lot of people that we’ve never seen come through,” Richards said. “These food giveaways that we’re doing are critically needed in our communities right now.”

Eliza McCall, chief marketing officer, said Second Harvest donated the equivalent of 22 million meals in groceries to families from March to December last year. The amount equals 6 million more meals than would have normally been donated, she said.

The Saturday car line ran smoothly with seemingly no hiccups.

Melissa Bennett, a Lowndes County resident with “limited income,” began attending the distributions during the pandemic.

“It’s been hard with the pandemic and everything, and when you’ve got kids and grandkids, it helps out a lot,” she said. “When you’ve got limited income, it really helps out and I thank the program for it.”

Lowndes resident Linda Peace said she has been through the line several times through the past months.

Imagining a Valdosta community without Second Harvest, Peace said a lot of people may get desperate and try to find other sources of acquiring food.

She was appreciative of the National Guard’s assistance Saturday.

Fulfilling a mission, the National Guard has been helping Second Harvest since April 19, 2020, packing food boxes and loading cars on event day.

“It’s saddening, but then, it’s been a pleasure to be here to help them,” he said. “It’s real sad that we have to come out here and provide this food because that means that there are kids and families that are sitting home without the food and they definitely need it.”

Crowder said he had a choice of three cities where he could serve. He chose returning to his hometown to give back to a community he said is suffering during the pandemic.

He said it’s great for his soldiers to be on the frontline on distribution days, meeting the families they’re helping. The Guard gets words of thanks and appreciation, he said.

“It’s that response that really pushes a lot of us forward,” he said. “You can definitely see that you’re helping make an impact on a lot of people’s lives. It’s an awesome experience.”

But he said it hurts seeing so many people in need of food.

Spc. Natasha Anno has been on “COVID-19 orders” since July. She said she and her peers are in Valdosta for a purpose.

She joined the National Guard to serve the community and she said assisting Second Harvest falls in line with her reason for becoming a soldier. She said the National Guard not only deploys and helps people overseas but it takes care of the home front, too.

“It’s really hard, sometimes, because you see how hard these families have been hit and you just want to do your best for them, so you’ve got to come out here motivated and happy all the time,” Anno said. “It’s hard to see these families struggling because you know that they’ve lost their jobs with COVID and everything.”

It’s especially difficult for Anno to see families in need with children.

“You see all of these children in the cars and your heart hurts,” she said. “These families are sometimes out here the day prior waiting. … Most of these families have kids with them in the car seats and they’re sleeping, and it just hurts.”

She remembers interacting with a Hispanic family who spoke minimal English. Speaking little Spanish, Anno said it was nice to be able to communicate with the family and help them through the line.

Spc. Naomi Toles is glad residents have the chance to receive food. She said working the distribution line is eye-opening.

Caring for the community’s needs is the foundation of the National Guard; if there’s a need, the Guard will be there to serve, she said.

Second Harvest is not accepting outside volunteers due to COVID-19 precautions.