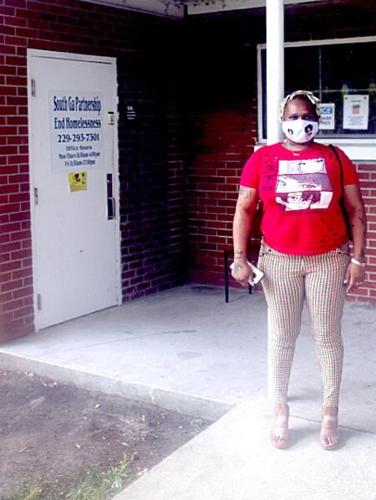 Vicah Smith stands in front of the offices of the South Georgia Partnership to End Homelessness on Lee Street in Valdosta. She was evicted from her rental home after problems with the rental assistance program offered by the state of Georgia. 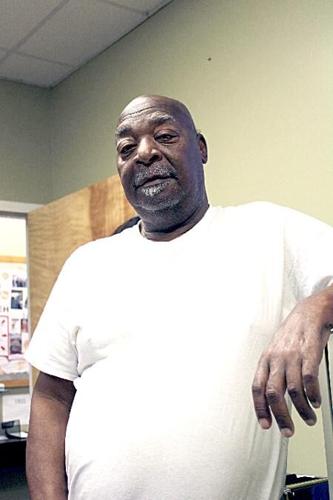 Charley Milton waits for help inside the offices of the South Georgia Partnership to End Homelessness. His application for state rental assistance was turned down, the Partnership said, because somewhere along the way a duplicate application showed up. 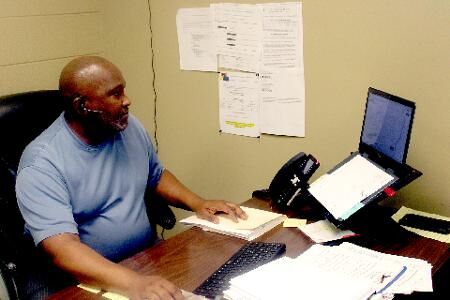 Ronnie Mathis with the South Georgia Partnership to End Homelessness works at his office on Lee Street. 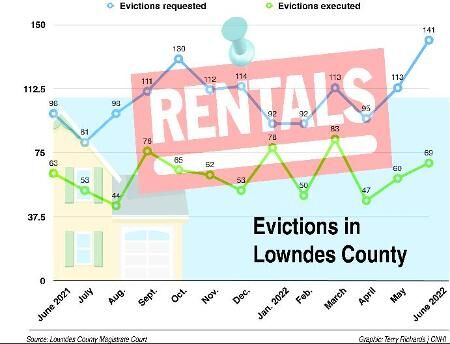 Vicah Smith stands in front of the offices of the South Georgia Partnership to End Homelessness on Lee Street in Valdosta. She was evicted from her rental home after problems with the rental assistance program offered by the state of Georgia.

Charley Milton waits for help inside the offices of the South Georgia Partnership to End Homelessness. His application for state rental assistance was turned down, the Partnership said, because somewhere along the way a duplicate application showed up.

Ronnie Mathis with the South Georgia Partnership to End Homelessness works at his office on Lee Street.

VALDOSTA — Vicah Smith doesn’t have a place to live.

“Sometimes I go and stay at the hospital,” sitting in South Georgia Medical Center’s air-conditioned lobby, she said. “I have a friend who drives a cab, and sometimes I stay with them.”

Until recently, she had a home on Vallotton Drive which she rented.

She was hurt at her job in October and said she was fired after seeking help with workers’ compensation.

She reached out to the South Georgia Partnership to End Homelessness, a nonprofit organization, for help with getting government assistance in paying her rent.

“They helped out with paperwork,” Smith said.

Georgia’s Department of Community Affairs runs a program that is supposed to distribute federal funds to people in need of help with paying the rent.

The DCA asked for specific paperwork from her landlord regarding the amount of rent she paid. Smith said the landlord was willing to send something electronically but the DCA required actual paper paperwork.

Two days after she asked her landlord for the paperwork, she came home to find a note from the county constable ordering her to vacate her home by the end of the week.

Ronnie Mathis, who works with the homeless partnership, pulled up Smith’s DCA file on a computer, pointing out where the department had denied her application for help specifically because of the lack of paperwork from her landlord.

The DCA’s rental help program is supposed to send payment checks directly to landlords when possible but can send the checks straight to the renters if the landlords won’t take part in the program, Mathis said. Smith said she hasn’t heard anything from the DCA’s rental program.

“The DCA has failed this lady,” Mathis said.

Mathis said the partnership has seen a big upswing in the number of people seeking help for paying their rent.

Numbers provided by the Lowndes County Magistrate Court show that, while the number of applications by landlords for eviction notices increased in Lowndes about 31% from June 2021 to June 2022, the actual number of formal eviction notices stayed about even.

In fact, the statistics show the numbers of both eviction applications and actual evictions in the county fluctuating a great deal during that 12-month period.

The Centers for Disease Control tried to mandate a nationwide moratorium on evictions in the wake of the COVID-19 pandemic but the Supreme Court ruled in August 2021 that the CDC didn’t have that authority.

WHERE THE LANDLORD STANDS

It’s easy to view landlords as villains in this scenario, ejecting desperate people from their homes. But it’s not that simple.

Barbara Brown, like Smith, was injured on the job last year. She has a daughter who requires around-the-clock care. Brown was behind five months rent on a $600-a-month home on Cummings Street.

Partnership case worker Shontina Robins said Brown had a landlord who was willing to help her.

Doris Foster, her landlord, has tried to work with Brown and the Partnership to settle the situation but she has taken an economic hit in the process.

“When (Brown) moved in, I was having a problem with flooring in the rental home and it cost about $3,000 to fix,” Foster said.

“I’ve really been trying to work with (Brown) because she’s a good tenant, and I don’t want to evict her, but I can’t afford to not have anything coming in,” Foster said.

Brown’s home is Foster’s only rental property. Foster and her husband live on a fixed income.

Repairs and upkeep of a rental home are difficult under these circumstances; Foster had to take a loan to get the flooring repaired.

Mathis said, in the three weeks since this interview with Brown and Foster, a situation had been worked out so that Brown was still in her home.

“We’ve got her taken care of,” he said. “There have been no changes.”

TRYING TO GET BY

Life has been hard for Charley Milton of late.

His wife died in December of cancer. He has no toes thanks to gangrene. His car was repossessed. Now he’s afraid of being evicted from his rental home on Barack Obama Boulevard.

His wife had worked for 22 years. Now the widower is living on Social Security and is two months behind on his rent and still has to pay for utilities. His rent debt comes to $750. At the time of this interview three weeks ago, his landlord wanted him to pay up in a couple of days, he said.

“It’s hard by myself,” Milton said. His children are grown and live in Miami and North Carolina.

Robins said the DCA turned down Milton’s application for rent aid because there was a duplicate application on file. No one knows how that happened, she said, and the DCA hasn’t responded to requests for help on the case.

Unlike Barbara Brown, who was able to work out her situation, Milton’s case is still up in the air, Mathis said.

WHERE THE MONEY COMES FROM

Georgia received two allocations of money from the U.S. Department of the Treasury for the Georgia Rental Assistance Program, which started in March 2021. The program helps people who were financially crippled by the COVID-19 pandemic since March 13, 2020.

Some of the funds go to the state, while some go to 12 cities and/or counties with populations of more than 200,000, Adrion Bell, director of marketing and communications for the Georgia Department of Community Affairs, said in a statement. Georgia’s overall funding totaled $989 million.

The program will pay up to 18 months of rent and associated costs, he said.

To qualify for the program, renters must either qualify for Georgia unemployment, have experienced a financial hardship since the pandemic’s start, demonstrate a risk of homelessness and meet the income requirements (80% or below their area’s median household income.)

Mathis said the problem with the Rental Assistance Program is the snail’s pace of processing applications.

The department has a high degree of turnover in processing personnel, which means applicants have to start all over again with a new case manager who doesn’t know the details of their situation when the previous processor quits, Mathis said.

“DCA has not experienced a high turnover among (Economic Recovery Act) processors … Our attrition rate in this area is no higher than normal,” Bell said. “We made several adjustments to improve our processing time and provide additional access and support to applicants. We have continued to build out our staff and have more than 285 employees on our processing team, working day, evening and weekend hours.”

DCA staff can work at home or in person as a COVID-19 measure, allowing the department to ensure staff availability and avoid disruptions, he said.

Bell also said the department is not suffering any budgetary woes that would affect the rental program.

The rental assistance program gets between 1,000 and 2,500 completed applications for help each week, Bell said.

“The DCA is giving out misinformation,” he said. “They need to stop saying there isn’t a problem; there is a problem and they need to fix it.”

EVEN THE HELPERS NEED HELP

The South Georgia Partnership to End Homelessness, located in an office at the county’s social services center on Lee Street, is in need of financial help itself. Mathis said grant money has run out and the organization is relying on contributions, largely from local churches.

He turned in an application for financial aid through the American Rescue Plan Act, a federal economic stimulus package approved in 2021 to jump-start the economy in the wake of the COVID-19 pandemic. Mathis is still waiting for word on the application.

The City of Valdosta and the Greater Valdosta United Way will dole out almost $1 million of ARPA funds locally to nonprofit organizations.

The city has no projects to aid people in immediate need of rental help but instead is investing in long-term plans for affordable housing, Matheson said.

“The purpose of a city is not to pay your rent,” he said. “If I could find a solution to it, I’d be a white knight.”

The city has already budgeted $3.4 million for housing projects.

“Everything being built in Lowndes is at price points I can’t afford,” the mayor said. “We need affordable housing.”

The problem with evictions in Lowndes County