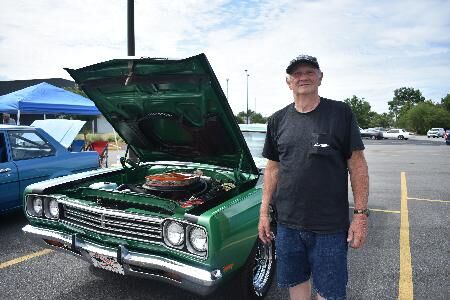 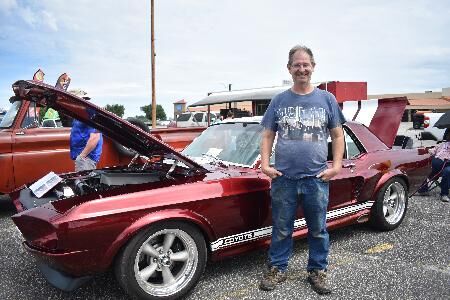 Marty Ickes restored and modified his 1968 Mustang from top to bottom, putting six years of work into the vehicle. It's actually a gift to his wife as Ickes put the money that would've gone into a new car into the Mustang. 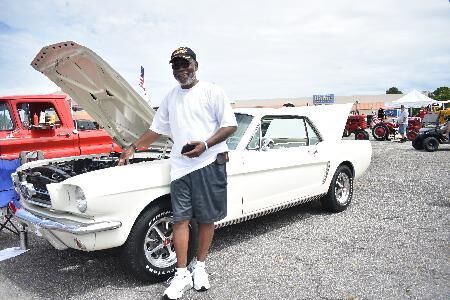 Dr. Willie Houseal has owned his 1965 Mustang for around nine years, buying it off a televised auction. He said the price for it was almost triple than its original price of $18,000 back in '65. 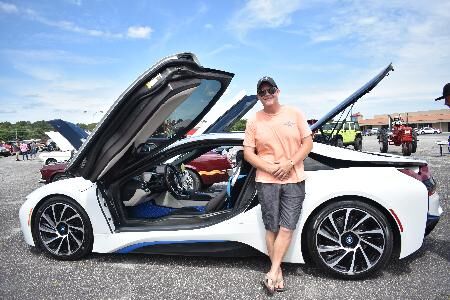 Matt Hovland brought out his 2016 BMW i8, a hybrid supercar that can reach 0-80 miles per hour in four seconds. He said the car has two electric engines in front and a gas engine in the back.

Marty Ickes restored and modified his 1968 Mustang from top to bottom, putting six years of work into the vehicle. It's actually a gift to his wife as Ickes put the money that would've gone into a new car into the Mustang.

Dr. Willie Houseal has owned his 1965 Mustang for around nine years, buying it off a televised auction. He said the price for it was almost triple than its original price of $18,000 back in '65.

Matt Hovland brought out his 2016 BMW i8, a hybrid supercar that can reach 0-80 miles per hour in four seconds. He said the car has two electric engines in front and a gas engine in the back.

VALDOSTA – Lavern McGill rides his 1969 Plymouth Roadrunner just about every day. He’s had the car for about a year now, buying it out of pure nostalgia.

When McGill was younger, he used to drive his cousin’s ‘69 Plymouth Roadrunner while his car, a ‘68 Chevelle, was out of commission. It was red with a black vinyl top and a 383 cubic inch B-series V8 four-speed under the hood.

It rode like a dream giving McGill the ability to take a whole heap of adventures in it.

“They were good adventures,” he said. “For one thing, I dated my wife (with the car) before I married her.”

At one point or another, he had to return the car back to his cousin, but from then on, McGill said he always wanted a ‘69 Roadrunner.

About a year ago, he found his ‘69 Roadrunner – green with a black center stripe with the same engine, decals and parts like it just came out of the factory – on the marketplace.

“I went to Sweetwater, Tenn., and picked it up,” McGill said. “I met a man, he brought it down to Sweetwater, and I unloaded off his trailer and loaded it onto my trailer, and rode it back.”

McGill said it’s been just as much a joy having it as it is a dream come true driving it once again.

These are the types of stories people heard as they stopped by the South Georgia Classic Car Club’s 14th Annual Spring Cruise-In. President Dan Bremer said that certainly was the hope.

Car clubs and individuals from throughout South Georgia were invited to bring their cars, old and new, to show them off and have fun. Most of the time, Bremer said he sees 1950s and '60s vehicles.

“Lately we’ve been seeing more late model Mustangs, some BMWs,” Bremer said. “(Today), we have some motorcycles here with a sidecar, we have the tractors here (and) the Jeep Club has brought some cars.”

Anything you liked and you would’ve found it, Bremer said. Bremer, a “car guy” himself, said the joy in hosting the event is seeing youth interact with the other “car guys and gals” there.

“One reason we like to invite the youth is to give them an introduction to our sport – our hobby,” he said. “If the youth aren’t taking up this hobby then who will? We have to pass it down to someone.”

The Georgia Sheriff’s Boys Ranch was invited for this reason.

Ranch youth got to hear a plethora of stories. Some of the car show participants have been building and keeping up their cars for decades, like Bremer with his first car, a 1955 Dodge Two-door Hardtop.

They could’ve also heard a story similar to Marty Ickes who bought his vehicle long before he restored it.

He now owns a red 1968 Mustang with two center, white racing stripes which he completely gutted after obtaining it in 1989 when he bought the body for $500.

It took a total of six years for Ickes to build the car the way it is now as a fully custom vehicle.

“We pieced it together with makeshift parts, drove it until about 2003, 2004 and it sat until about 2008,” Ickes said. “Then we started building it. The only thing we kept that’s original to the car is the stainless steel and the glass.”

All rotten sheet metal was replaced, a 5.0-liter Coyote engine was placed in it, custom Mustang two front suspension and custom full-length suspension in the back was added.

The seats were reupholstered, power steering was replaced and all the drum brakes were replaced with four disc brakes.

“You’ve probably never driven a car with four drum brakes, but you can stop one time and it takes 100 yards to stop,” he said. “It’s dangerous to drive a car like that because everybody can stop a lot quicker.”

It can stop with the best of them, he said, and is probably the biggest improvement.

He also replaced the gauges with new electric gauges that will sense everything down to the tire pressure. They still look like the originals, too. The same was done to the performance stereo system.

“We wanted to keep the interior nostalgic,” Ickes said. “This is what you drove back then and we wanted to keep that look, that feel. We could’ve put power windows in it, but we’ve still got the good old cranks.”

It’s still quicker, stops better and handles a lot better than what the original did. This is the spirit of the restomod – restoration-modification.

Ickes said his wife chose the red color out of 30 paint samples he picked out. The official color is a candy brandy wine – a black base with red pearl and brandy wine on top of it.

He knew he wanted to add the Mustang GT racing stripes to get that '60s look back but as an added bonus, the white stripes make the red pop.

There are also more casual stories about cars like with Dr. Willie Houseal and his cream 1965 Mustang coupe.

At that time, a buyer would have paid $1,800, but he said it sold for about triple that when he bought it in 2014. Once he bought it, he found out the car had quite the history.

“Someone had stole it at one time, then it was recovered,” he said. “It wound up being in a flood one time and they restored it. It’s been in California, Las Vegas – all those places out there – before they were able to restore it and bring it to its luster (again).”

Prior owners have tried to maintain the original aspects of the car as much as possible, but by the time Houseal got it, he had to bring it up to current safety codes.

Houseal has replaced the brakes, tires, power steering and power brakes, rebuilt the carburetor, installed a rear mirror and reupholstered the interior to match the exterior.

“You’ve got to make everything from bumper to bumper appealing,” he said. “I think that’s what I’ve done.

Houseal said he enjoys driving it, cranking it up just about every two weeks to stall carbon build up, but said if the price is right, he’ll gladly sell it.

Newer cars entertained the Cruise-in’s attendees as well, the standout being Matt Hovland’s white 2016 BMW i8.

It’s a hybrid supercar featuring four-wheel drive with two electric motors in the front and gas engine in the back. It’s got the Mini-Cooper turbo three-cylinder engine with a top speed of 180. The 0-80 miles per hour in four seconds with 75 miles to the gallon. A carbon-fiber aluminum racing frame is encapsulated at the bottom of the vehicle.

Hovland said he drives it just about 30 miles everyday taking his two kids to where they need to go. It’s one of the few supercars that features back seats.

“My son has this car on one of his video games, so he loves it,” Hovland said. “It’s smooth, quiet because of the electric motor. They actually put an external speaker on it so when you’re in a lower mileage area, it’ll actually make a sound like it’s an exhaust so it’s safe for people to walk around.”

You’d be riding around like a ghost otherwise, he said. Hovland said the keep-up would be expensive (i.e. a $400-$500 oil change) if he didn’t buy the maintenance package for it.

It includes brakes, oil changes and other maintenance requirements with a lifetime guarantee. The i8 has zero-inflate tires, too, allowing it to drive at least 50 miles on a flat tire.

Hovland has entered a few car shows with it, most recently entering it into the Azalea Festival car show in March. He ‘s done Cruise-Ins in the past and has done a show in Moultrie, too.