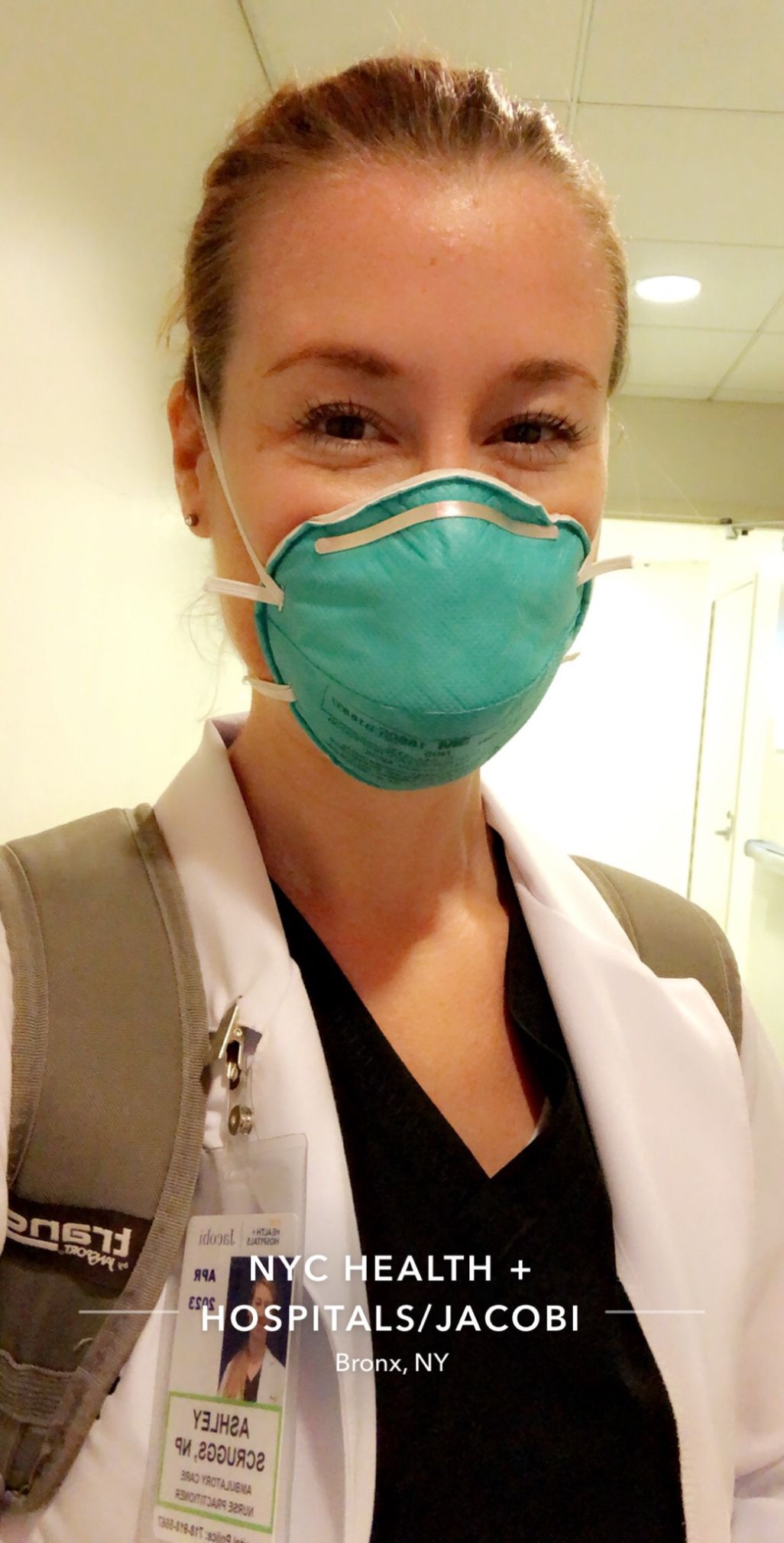 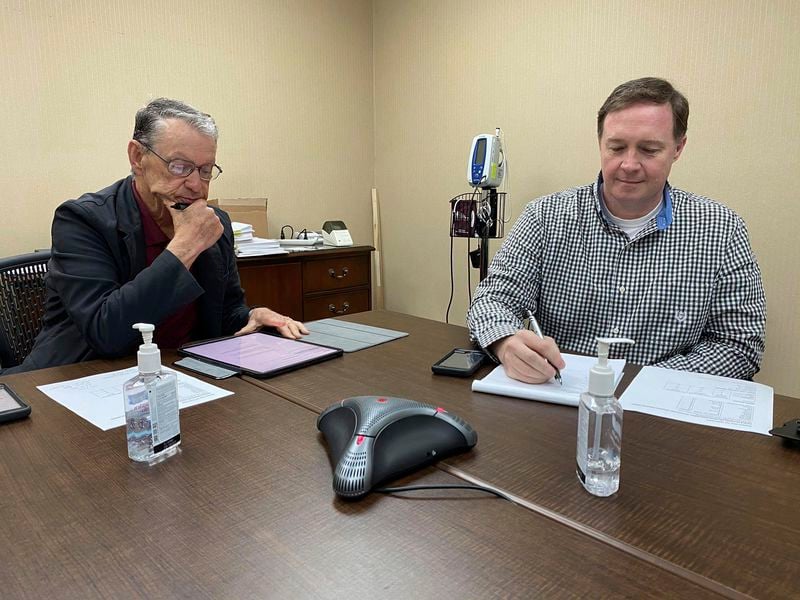 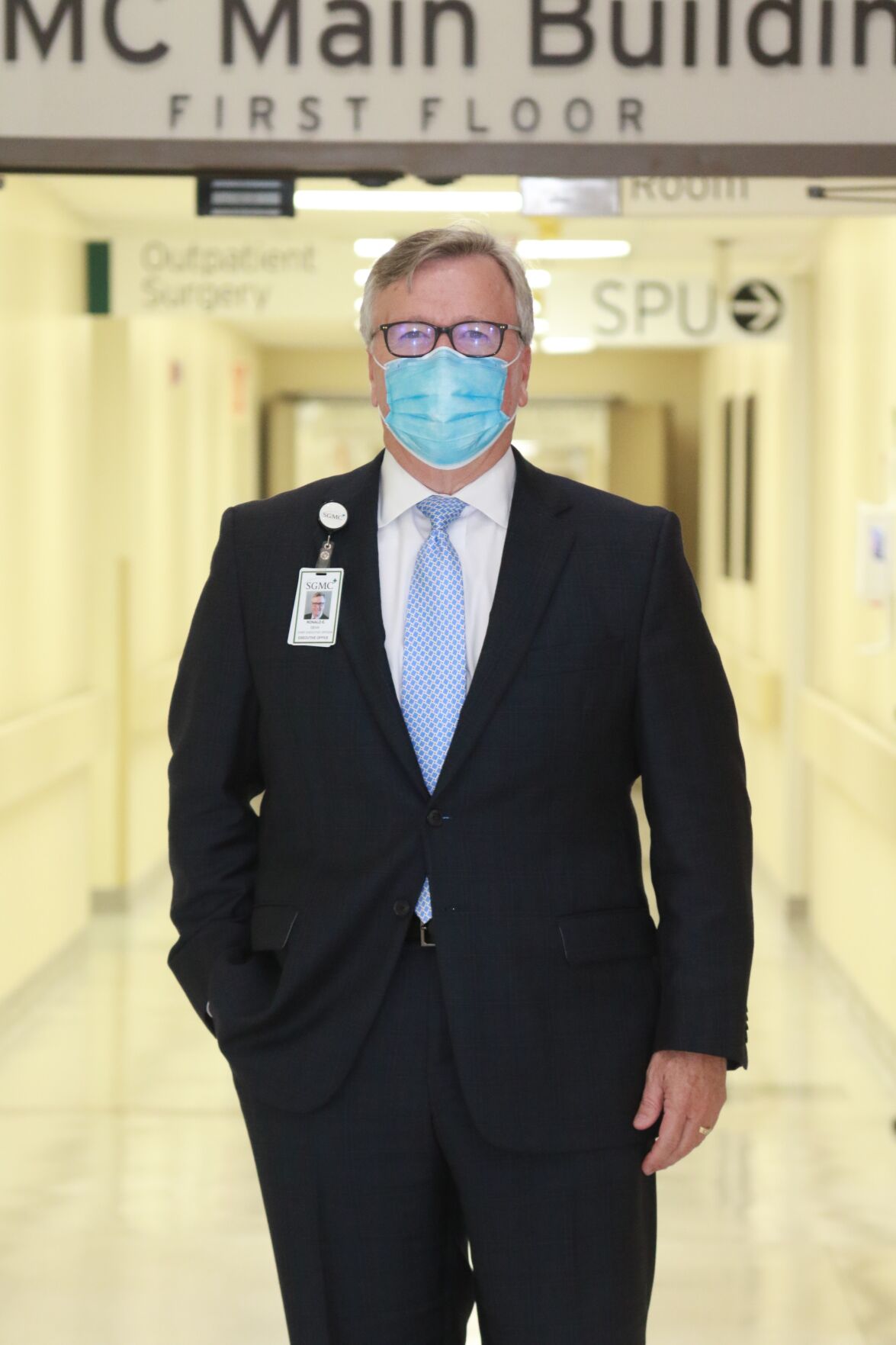 Dr. Ronald 'Ronnie' Dean is the president and chief executive officer at South Georgia Medical Center. The center has cared for COVID-19 positive patients and has tested for the virus since the start of the pandemic. 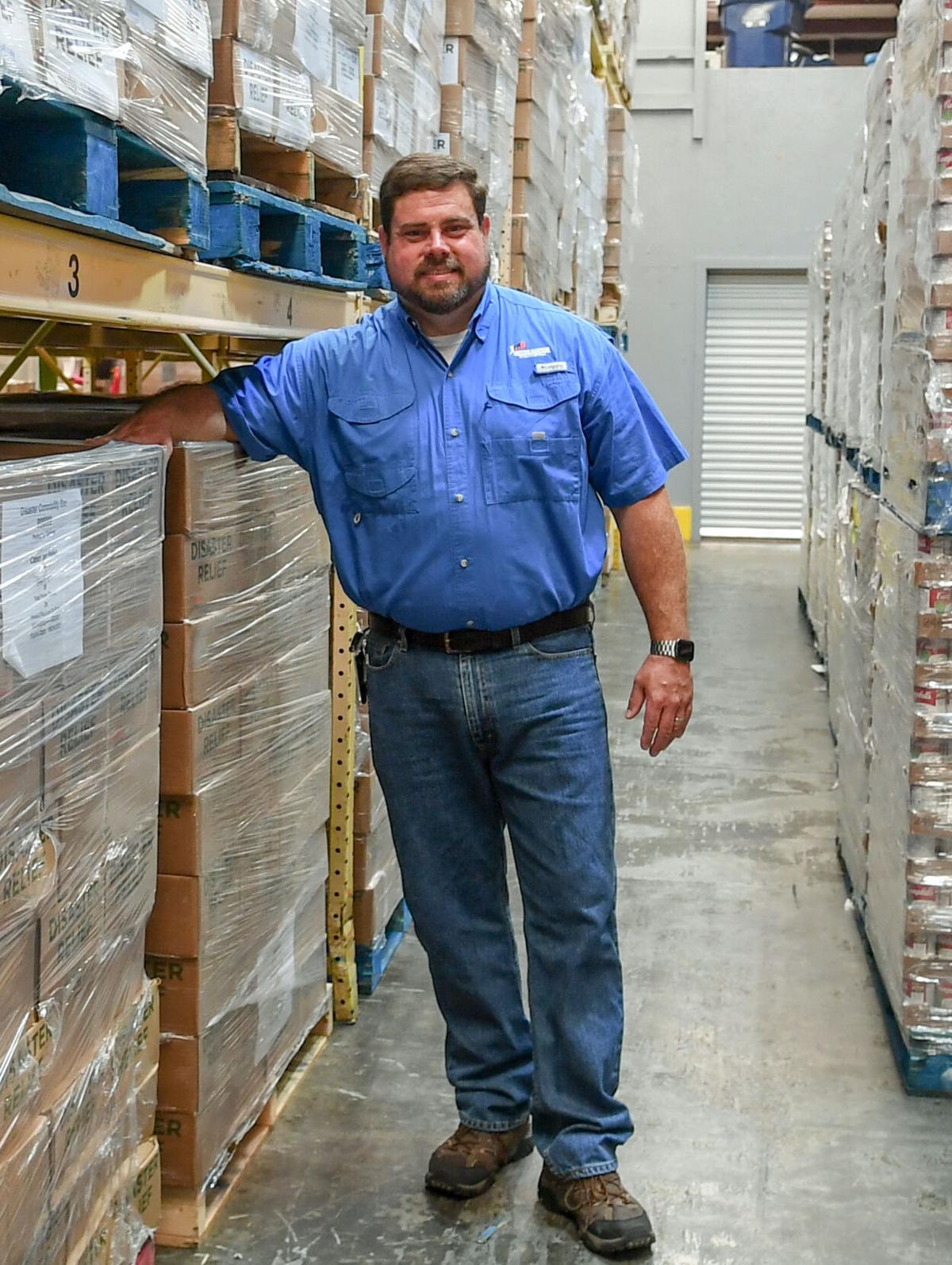 Frank Richards is the chief executive officer of Second Harvest of South Georgia. The food bank has held at least 27 food distributions for families affected by the pandemic. 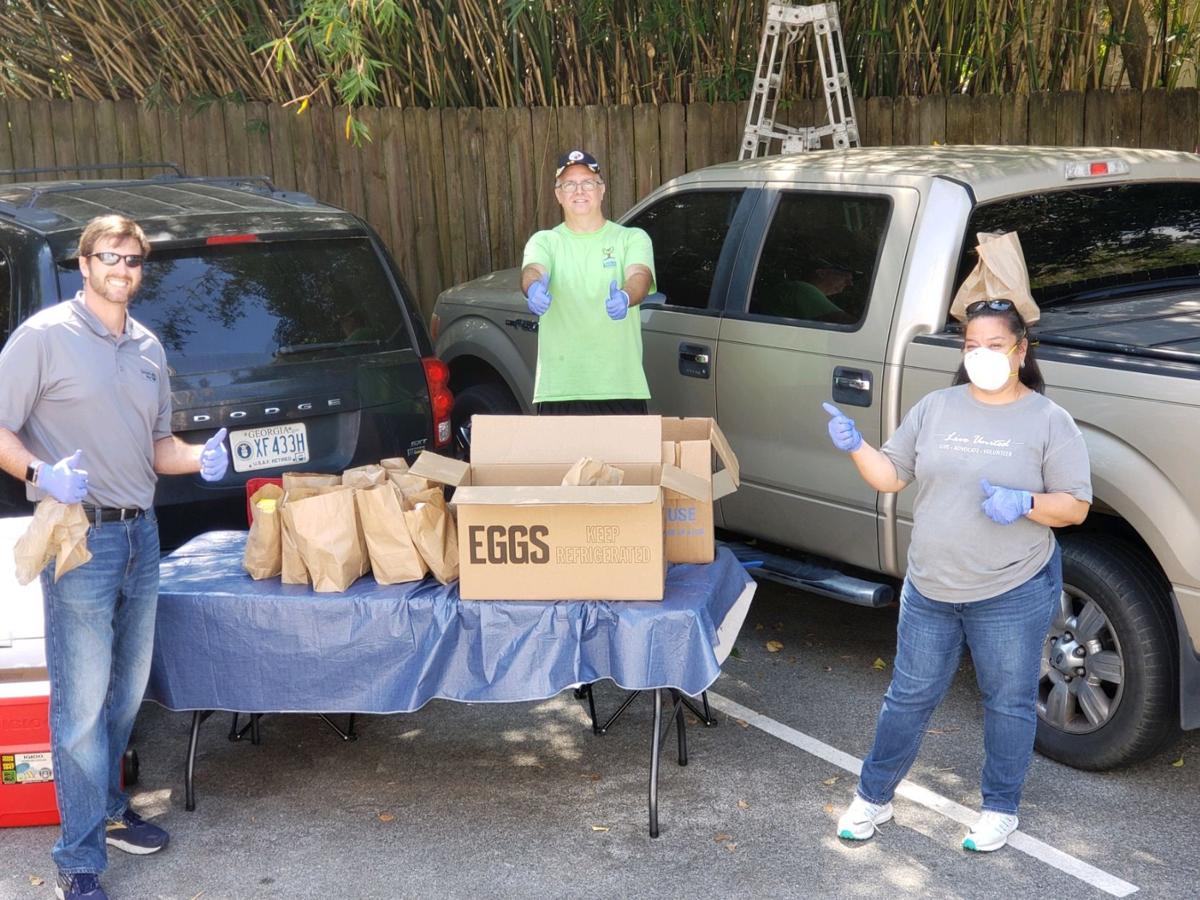 Michael Smith and Melissa Register, both with the Greater Valdosta United Way, join Tony Gunter, co-founder of Living Bridges Ministry, to feed the residents who arrive at the ministry's community center at a drive-through event. 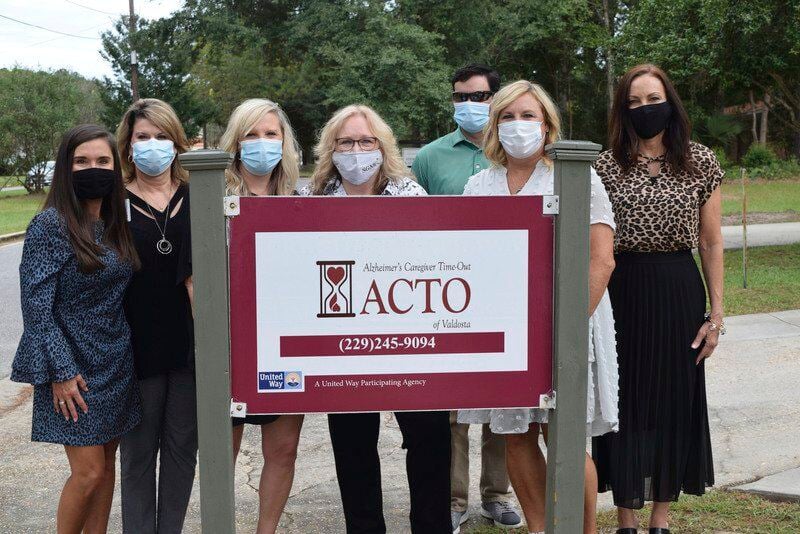 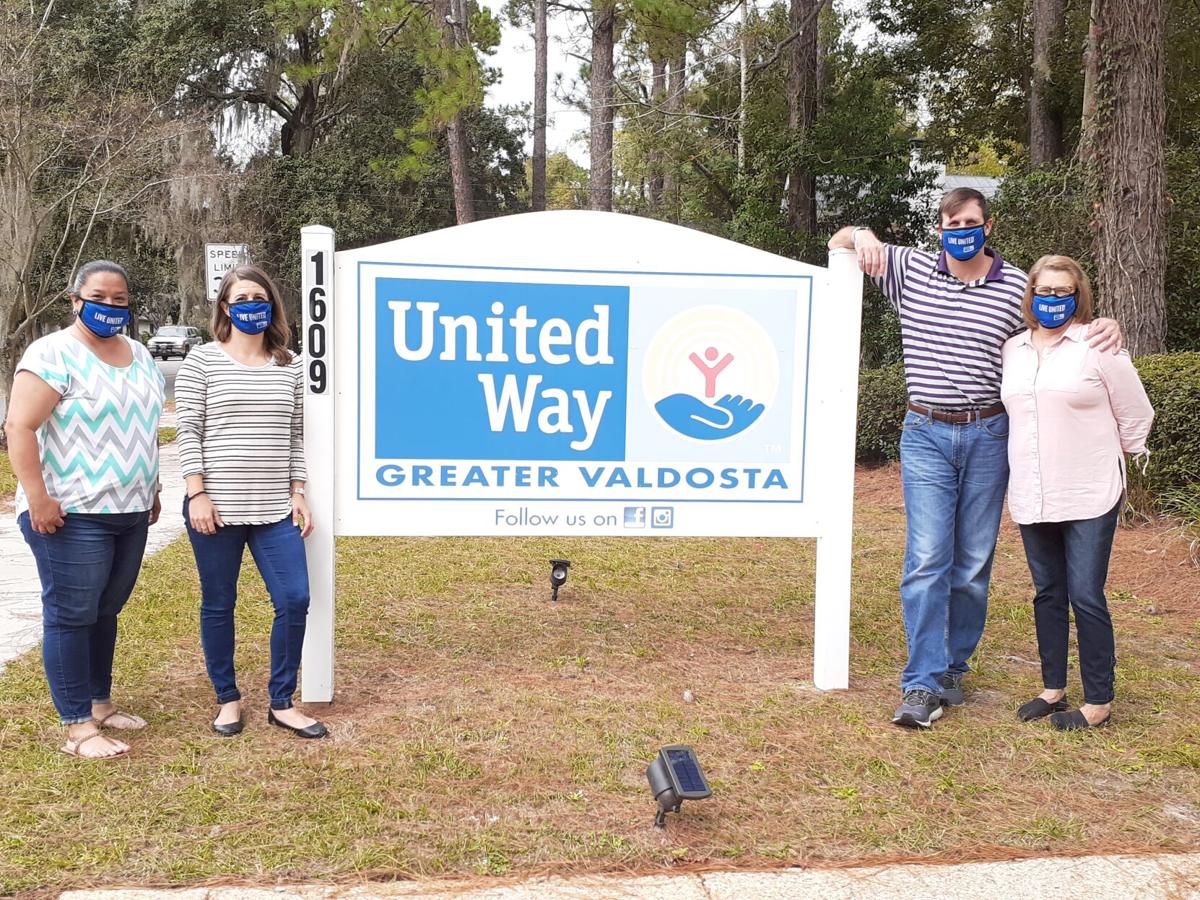 The Greater Valdosta United Way staff has helped multiple agencies and families with utility, food and monetary assistance throughout the pandemic.

EDITOR'S NOTE: It took health care workers, businesses and organizations to drive Valdosta through the pandemic's earlier days. Some joined hands and shared the common goal of keeping residents fed while others cared for people fighting for their lives due to COVID-19. The Valdosta Daily Times recognizes some of these frontline workers and sheds light on their efforts.

The Georgia Department of Public Health's South Health District has been at the forefront of the COVID-19 pandemic in the past several months. From contact tracing to conducting its specimen point of collection sites in various counties, South Health professionals have been a constant in combatting the virus.

“The experience we have gained since the beginning of COVID-19 is extraordinary to look back on," Dr. William Grow, district health director, said. "At the beginning of this response, things were changing every day, sometimes every couple of hours. I could not be more proud of the resilience and commitment of our staff.”

There were also 10 case investigators, 17 contact tracers, two epidemiologists and an emergency preparedness team working to get the community through the health crisis.

The district updates its website daily with COVID-19 data from the 10 counties it covers. The website – covid19.southhealthdistrict.com/ – provides daily testing numbers and various guidances.

South Health has taken to social media to keep the community informed through the use of graphics.

" ... We are definitely still growing and improving as a district every single day," said Dwain Butler, district program manager and deputy health director. "There are a lot of moving pieces, planning, manpower and logistics behind a response of this magnitude. We have been learning under trial by fire and the knowledge we have gained is going to be extremely important once a vaccine is released."

Testing became a necessity once the pandemic struck.

At the pandemic's onset, SGMC crafted a plan in response to the new virus. Erika Bennett, hospital director of marketing, notes a national lack of personal protective equipment challenged the response to the virus.

"Organizing a clinically led response team comprised of physicians, nurses and support services leaders was a crucial first step in having the very best minds direct our readiness and response," said Ronald "Ronnie" Dean, hospital president and chief executive officer. "Out of the initial meetings, three collaboratives were formed: internal, external and community."

Hospital employees worked to build communication with the community while also maintaining evolving treatment plans. SGMC has used social media to release the number of COVID-19 patients discharged from the hospital while also introducing hospital staff.

In late March, the community rallied together in SGMC's parking lot to pray for medical workers. The event, Park and Pray, was a partnership with Park Avenue United Methodist Church. At least 200 cars arrived for the prayer, organizers said.

When concerns of the coronavirus first arose in South Georgia in early March, schools were mandated to close. With schools out, some people wondered how children would be fed.

Second Harvest of South Georgia answered the call and began partnering with Valdosta City Schools to establish feeding sites to give kids meals around town.

The community group held 27 food distributions both in Valdosta and in Tifton to provide packaged food to residents from March through October.

The food bank has received assistance from the Georgia State Defense Force of the Georgia National Guard, Rep. Austin Scott and school nutrition workers who were unemployed at the time of school closures throughout the pandemic.

“It can be difficult to try to wrap your head around the extent of the need,” Eliza McCall, agency chief marketing officer, said in an earlier interview. “We are trying to work by Secretary Sonny Perdue’s motto for USDA – ‘do right, feed everyone.’ We are doing our best to make sure that we are reaching as many as we can.”

When COVID-19 caused schools to shut down and some people to lose their jobs, Living Bridges Ministry stepped up and provided 29,174 sack lunches each containing breakfast, lunch and a snack.

A bonus grocery program began in October when residents could receive two extra days of groceries. Participants were tasked with attending a one-hour Zoom class, volunteer at the Living Bridges community center or community garden for one hour or pay a small amount of money via CashApp, Gunter said.

In May, Valdosta resident Dana Boruff and her friend, Cheryl Collett, sold signs that read "Faith Over Fear." Proceeds supported Living Bridges and its efforts. Boruff's son has previously volunteered with the organization's meal giveaways.

“When this pandemic hit, the Lord had touched my heart about young children who depended on lunch and breakfast at school, and I just didn’t know what that looked like (or) how they were going to be fed when they were not in school,” she said in a past interview.

The first round of sales netted $2,200 for Living Bridges. With the original estimate being $1,000, Boruff said people gave more than the $10 donation amount per sign.

“God is working even in the midst of this. It seems chaotic. It seems scary, but God is working and there’s no way to not see Him if you’re looking for Him,” Gunter said.

“The signs are perfectly appropriate. Faith over fear. We should be discerning about what we’re doing and where we’re going, but we should not necessarily be scared. I’m amazed that God still gives me a front row seat every day to the miracles that occur.”

Big Nick's on Baytree, the Manwell-Decoudres Restaurant Group, Pepsi and 9-year-old Mallory Patterson also donated either money or food to Living Bridges among several others for its pandemic relief efforts.

When Georgia residents were preparing to stay in their homes due to an April 3 statewide shutdown, Valdosta nurse practitioner Ashli Scruggs was headed to New York City to help the northern state combat COVID-19.

Scruggs joined at least a thousand others in the fight against the virus for 21 days. After working in New York public hospitals, she became the hospitalist at a recovery center stationed at Roosevelt Island Medical Center.

While in the Big Apple, Scruggs worked 12-hour shifts caring for COVID-19 patients in packed intensive-care units. In an earlier interview, she called the scene "chaotic" but did not shy away from what she felt was her mission at the time. With her "trauma face," Scruggs worked through her own fears of the virus to be brave for men and women in her care.

The pandemic sparked businesses to join the fight and aid the community. Some of those businesses formed the Caring Hearts.

The group’s first community effort benefitted workers of the COVID-19 screening station at SGMC's Smith Northview campus. Caring Hearts connected with Hogan’s Pharmacy and Chancy’s Drugs to provide lunch for the staff members at the station in August.

With the success of the first venture, Caring Hearts continued its endeavors. This time, Alzheimer’s Caregiver Time-Out received assistance. The group presented more than $1,300 and a collection of household supplies to ACTO in September.

Stone and others planned to continue the Caring Hearts project quarterly. They sought to partner with other businesses that desired to sponsor families or nonprofits.

The Greater Valdosta United Way ramped up its support for its agencies throughout the year.

The organization donates money annually to other area nonprofits, but due to partnerships with businesses, the United Way has been able to do more for its agencies as they assist people through the pandemic.

"Since the beginning of the COVID pandemic, donors have contributed over $90,000 to Greater Valdosta United Way's disaster fund to assist families and agencies in our community," Michael Smith, United Way executive director, said.

In March, six of the United Way's 20 agencies – including Living Bridges and Second Harvest – saw an increase in allocations to put toward their individual community efforts. The additional funding came from excess money stemming from the United Way's yearly campaign and a partnership with Georgia Power.

FeedWith5 was a two-fold partnership between Jimmy John's Valdosta and the United Way in April.The United Way collected donations of at least $5 that went toward buying meals from one of the five participating restaurants: Jimmy John’s, Relish, Just Love Coffee Cafe, Big Nick’s on Baytree and Jessie’s Restaurant and Catering. The meals were delivered to feed nonprofit staff and health care employees at no cost to them. The amount raised was more than $1,700, Smith said.

During the pandemic, the United Way partnered with CBC Bank, Art and Soul and Miller Hardware to establish the Free Little Pantry downtown and in other parts of the city to donate food. The pantry operates on a take one, leave one philosophy and includes diapers, wipes and personal hygiene items. Smith said the amount donated totaled $3,500 at least.

"We continue to distribute food to needy families daily," he said. "We have reserves remaining so that we can continue assisting those in need during the winter."

More than $48,000 has benefitted a rent and utilities program the United Way set up early during the pandemic for individuals. Agencies also gained from this allocation receiving help with rent, food, shelter and personal protective equipment, Smith said.

"Over $9,300 in payments for utilities (came) directly out of the United Way office to workers who were struggling to make payments due to layoffs and reduced work hours," he said.

The United Way received 35,000 masks from the U.S. Department of Health and Human Services in November in collaboration with Congressman Buddy Carter, Smith said. The organization gave them to schools in various counties, its partner agencies, area churches and other nonprofits.

"We have to live united to get through this pandemic and economic challenges we face in the future," Smith said. "We are all essential workers and first responders in the fight for health and safety of our community."