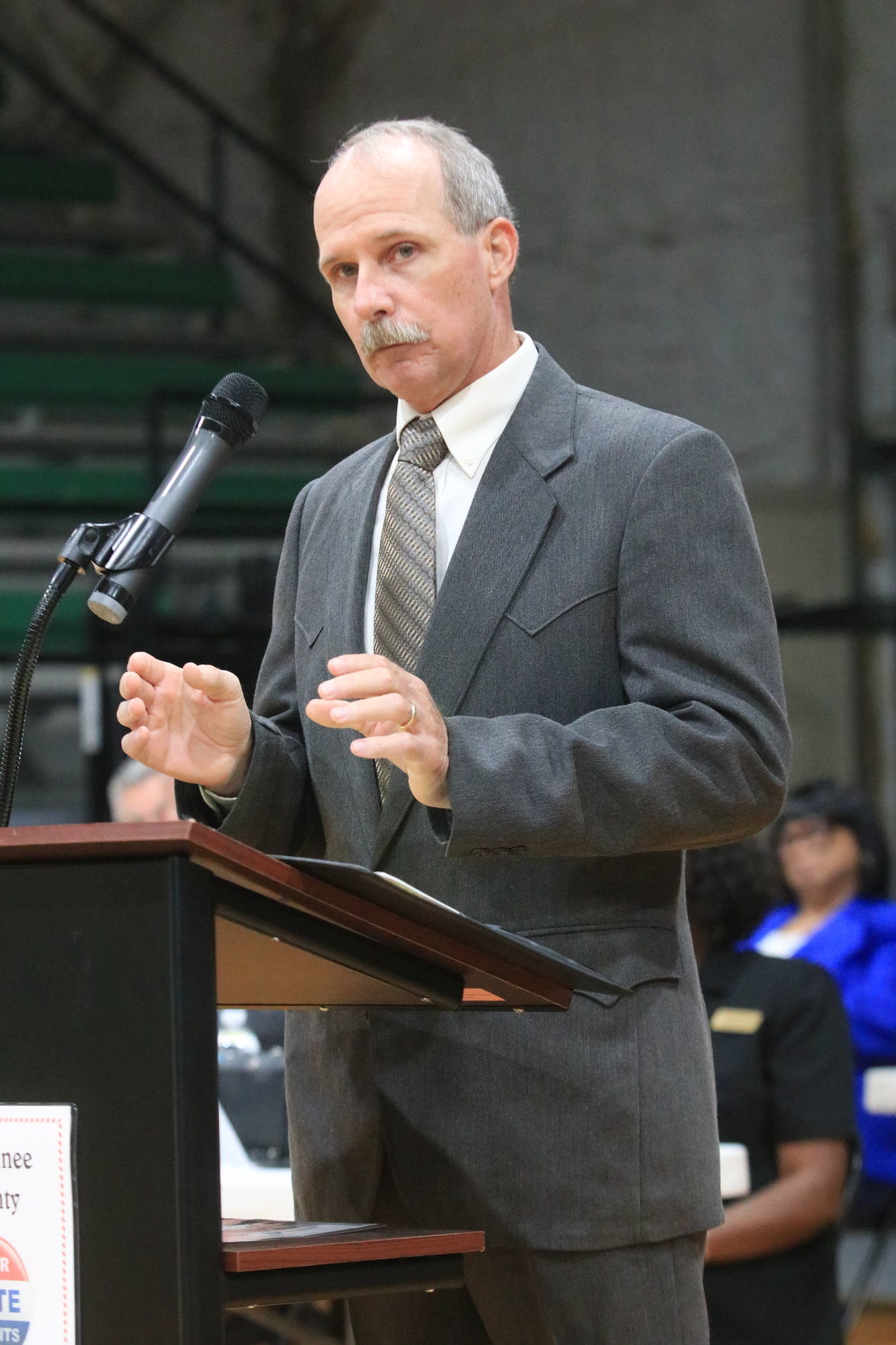 Shawn Hingson said one of his top priorities would be upgrading the county’s radio system for first responders. 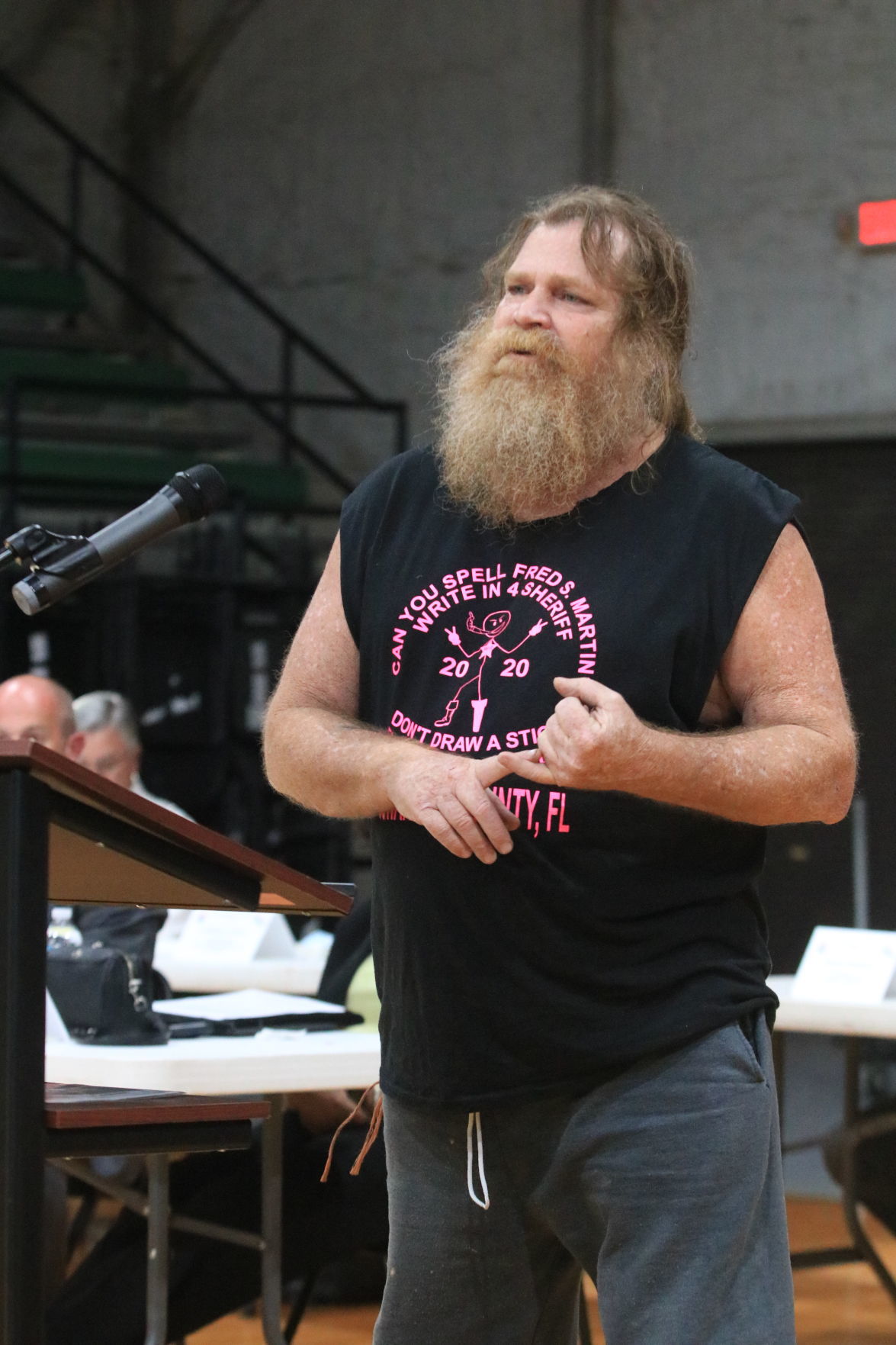 Fred Martin said all officers should wear body cameras that can’t be turned off. 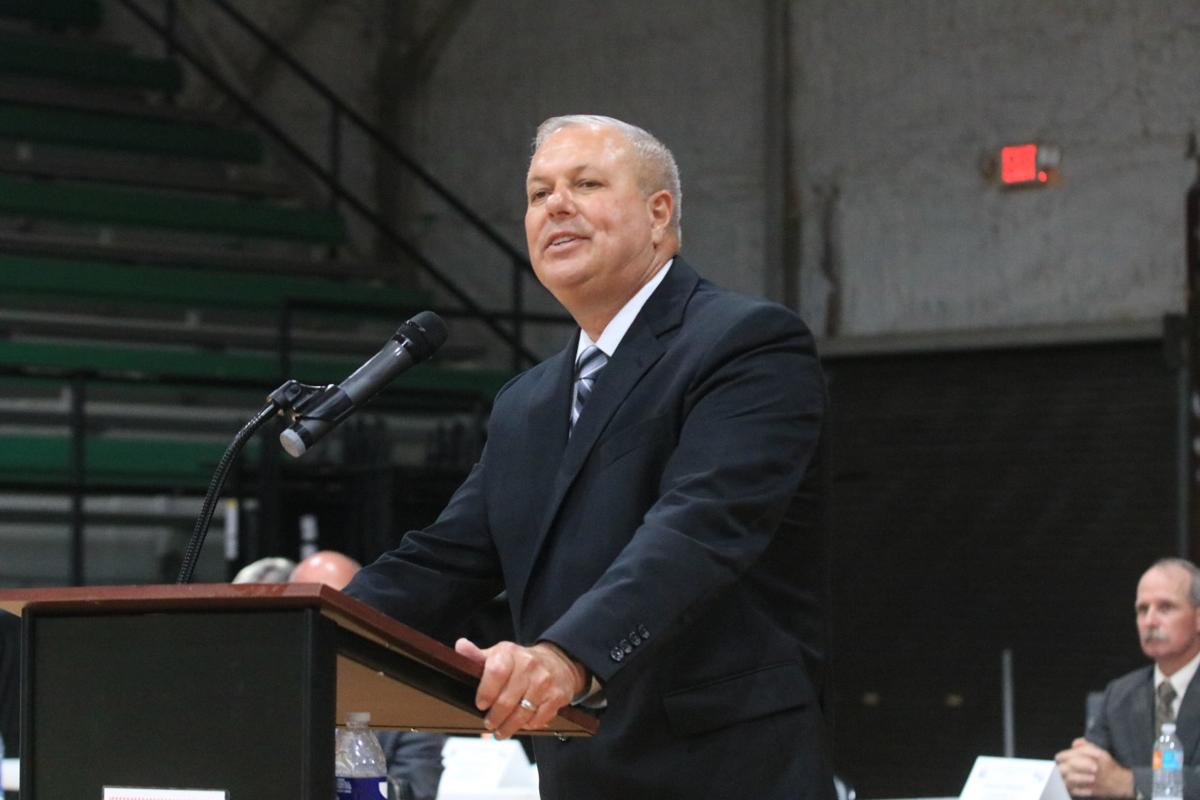 Shawn Hingson said one of his top priorities would be upgrading the county’s radio system for first responders.

Fred Martin said all officers should wear body cameras that can’t be turned off.

Meanwhile, Shawn Hingson has 27 1/2 years of experience as an officer with the Florida Department of Agriculture and Consumer Services.

The third candidate running for sheriff in the Nov. 3 general election, Fred Martin, admitted that he doesn’t have that same background.

“I’m not going to lie to you, I’m probably not y’all’s first choice for sheriff,” said Martin, a write-in candidate. “Mr. Hingson and Mr. St. John are both fine men, but they’ve been in the system for many years. If you keep hiring the same kind of person over and over again for the same kind of jobs and expect different results, it’s called insanity. Well, me, I call it stupidity.”

During his introduction, Martin said nothing has really changed since the previous two times he has campaigned for sheriff. Rather, he said the county continues to have an issue with drugs and doesn’t offer enough transparency in the sheriff’s office.

Martin said that would be solved with body cameras for all officers that are not able to be turned off.

St. John, though, said there have been changes and improvements made to the department since his election in 2016.

For starters, St. John said officers do wear body cameras and he crafted a policy on when and how to use the cameras. He also noted technological upgrades with the SmartCop system as well as implementing a social media and improved online presence.

“Which has been very, very, very helpful,” he said in helping officers solve crimes.

Those upgrades haven’t solved all the department’s problems, Hingson said.

One of his top priorities, if elected, would be to upgrade the county’s radio system, which Hingson described as “antiquated.”

“It’s in need of repairs or replacing,” he said, adding that it was a topic of discussion during the 2016 election cycle as well, but has yet to be addressed.

St. John agreed that the radio system is antiquated, noting that the county was close to finalizing a deal for a new and improved system until the COVID-19 coronavirus pandemic hit.

He added it was still a priority.

The two experienced law enforcement leaders also agreed that some of the use of force by officers across the country in recent months was wrong and would not be allowed in their departments.

“Choke holds are not allowed in our department,” St. John said, adding he has reviewed the SCSO use of force policy and that officers are able to do additional training through PoliceOne.com.

Added Hingson: “Even going back to our basic recruit classes, when you’re trying to handcuff a suspect that is fighting, it don’t do you a whole lot of good to grab them by the neck because he’s going to kick your butt with his feet or his hands. His hands and feet is the danger areas, that’s what you have to get under control.”

Jamie Wachter is the editor of the Suwannee Democrat, Jasper News and Mayo Free Press.