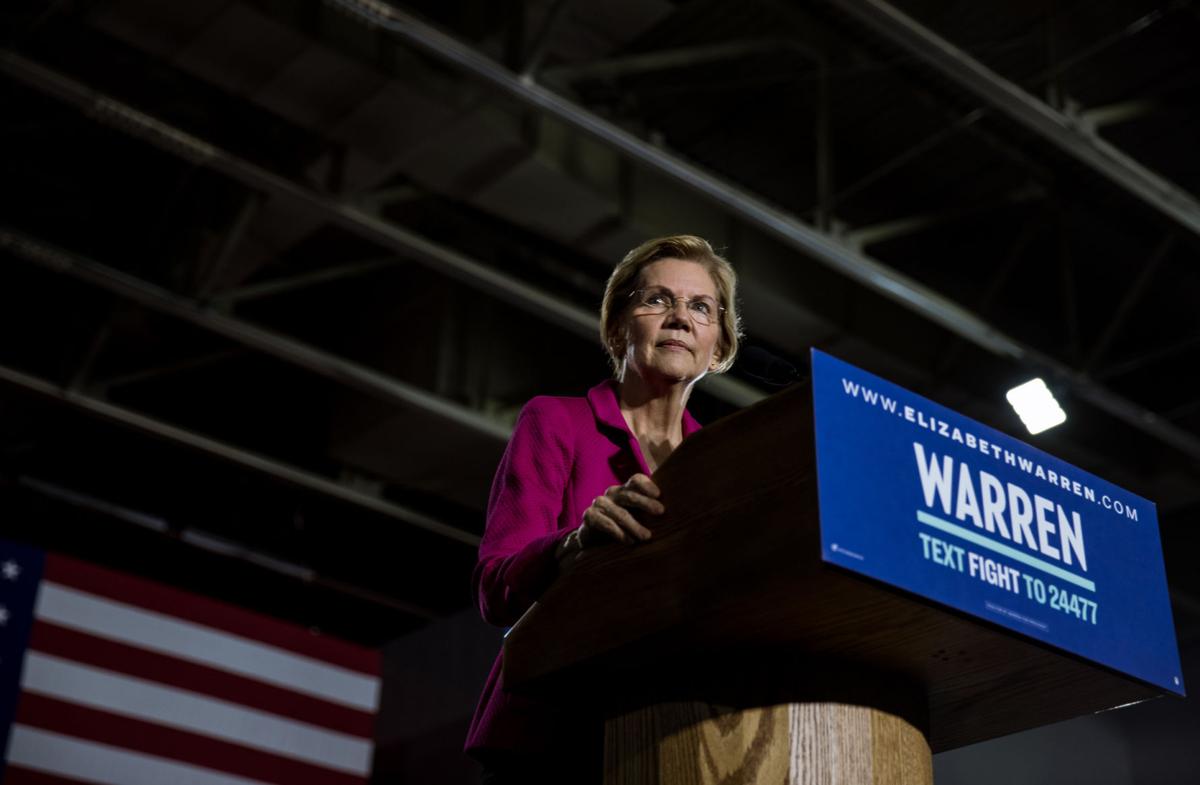 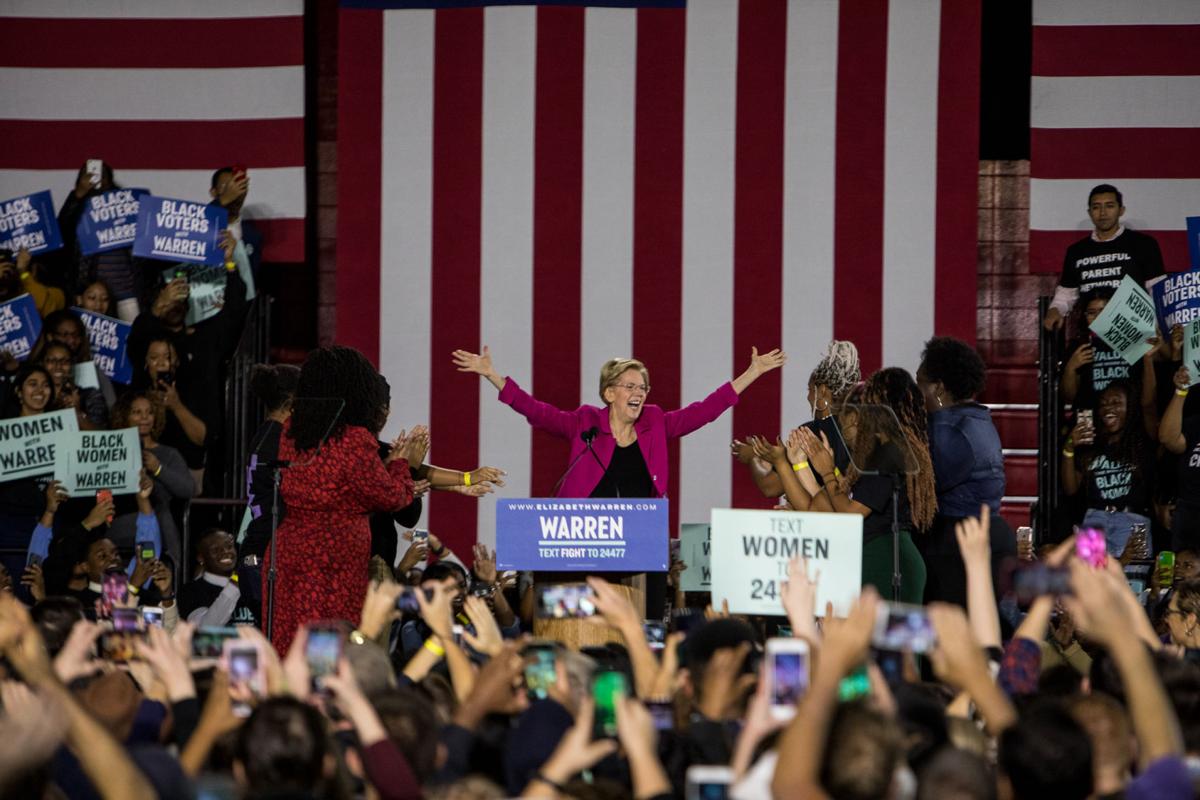 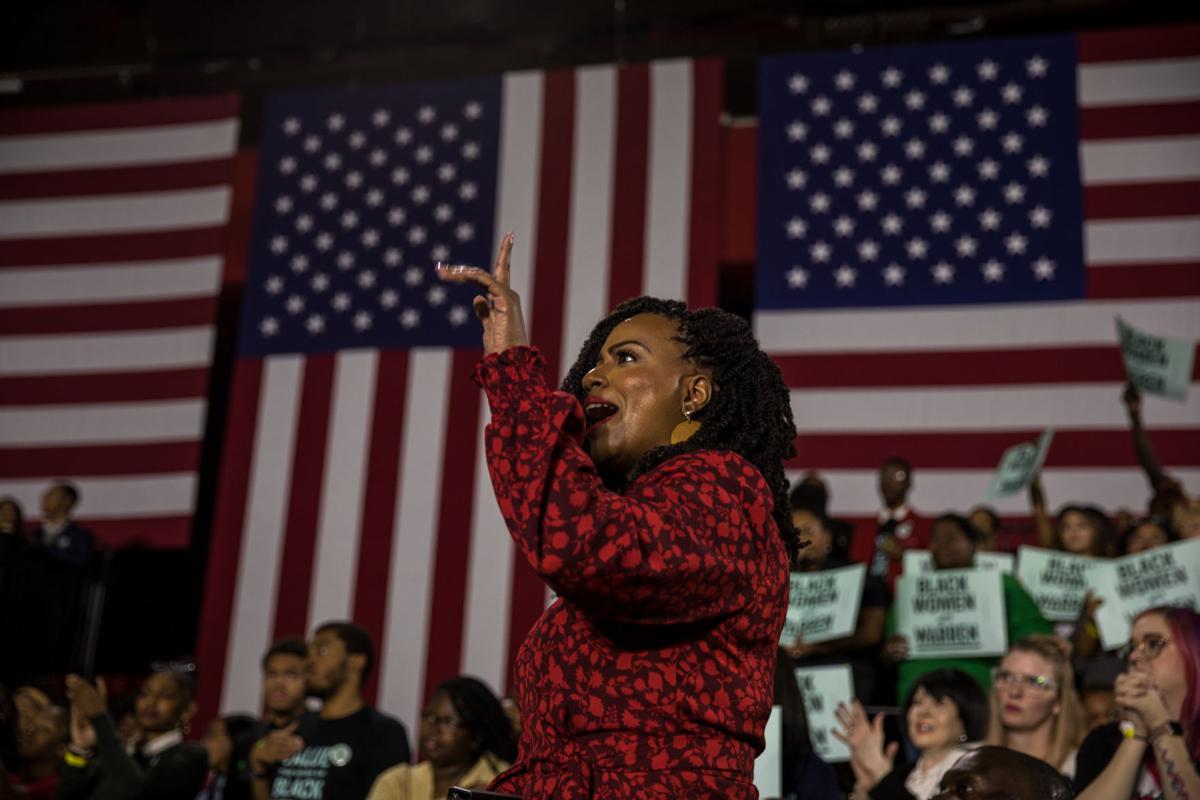 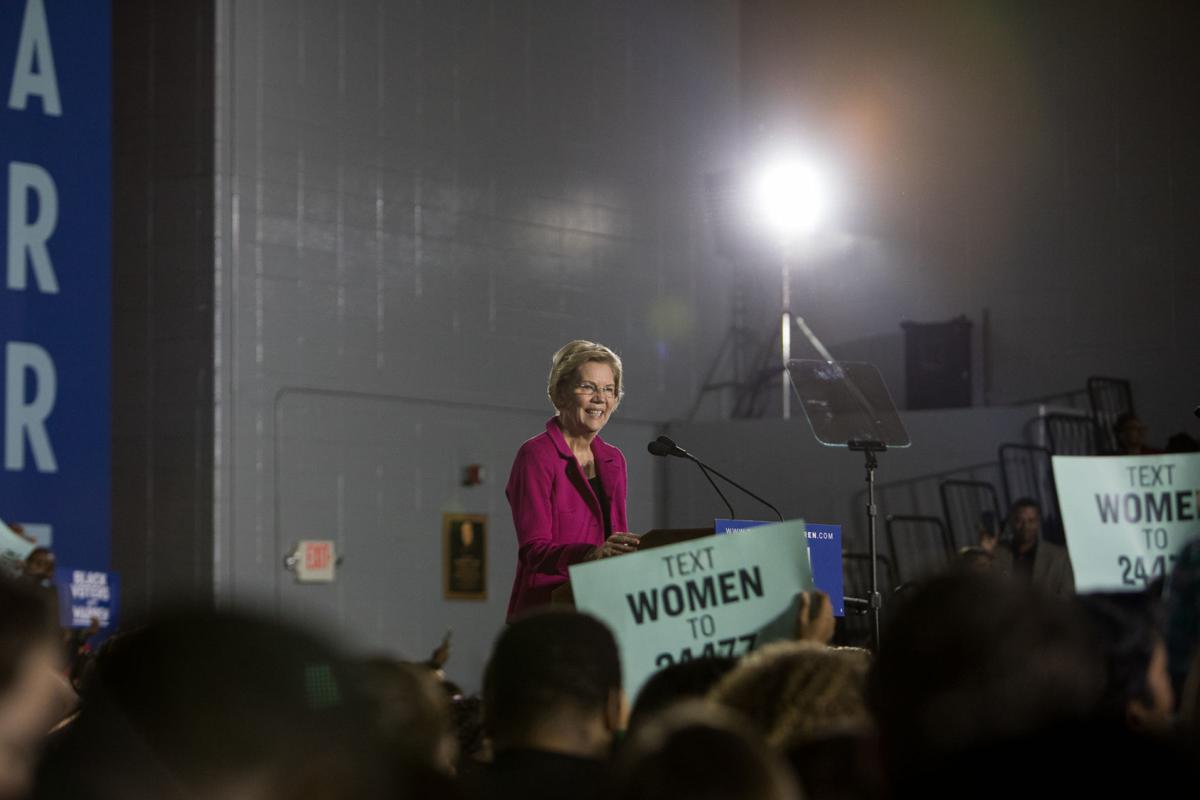 Elizabeth Warren halts her speech at Clark Atlanta University when a group of protestors disrupts the proceedings by stomping and yelling on Nov. 21. 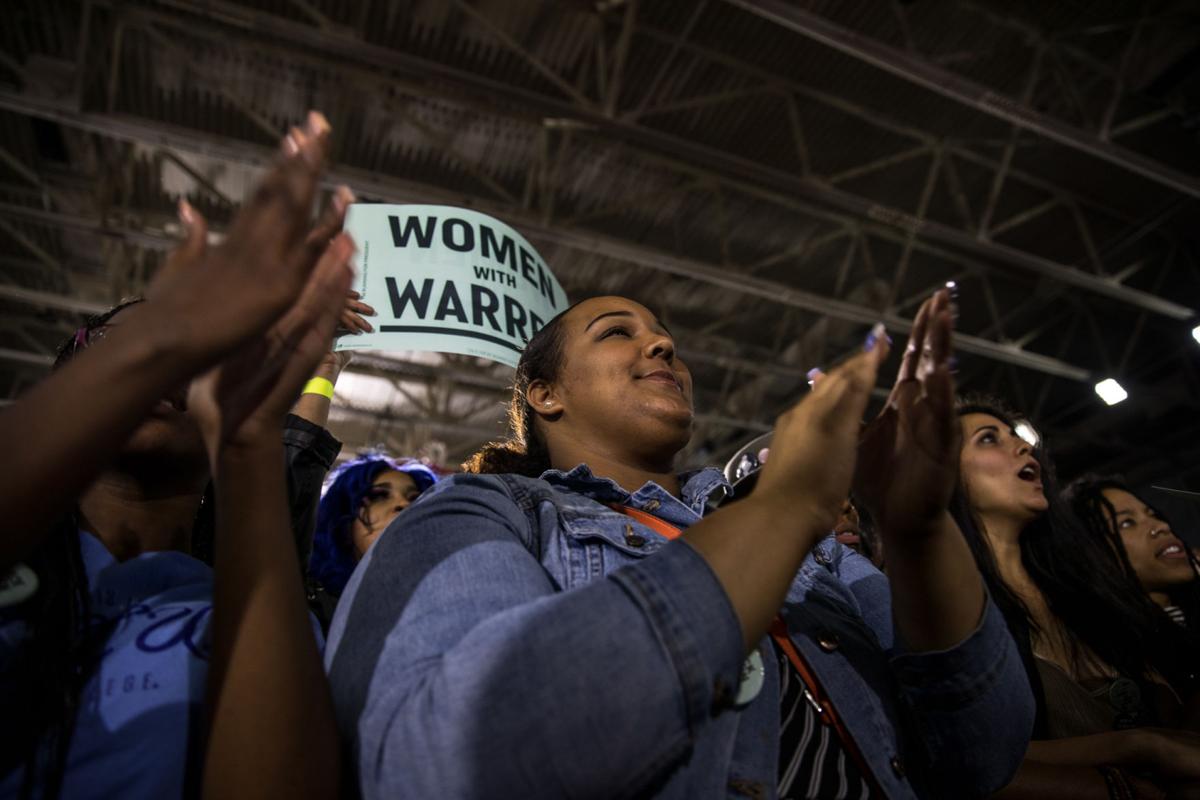 The crowd cheers on Elizabeth Warren whose speech on Nov. 21 in Atlanta centered around Atlanta's black washerwomen strike of 1881. 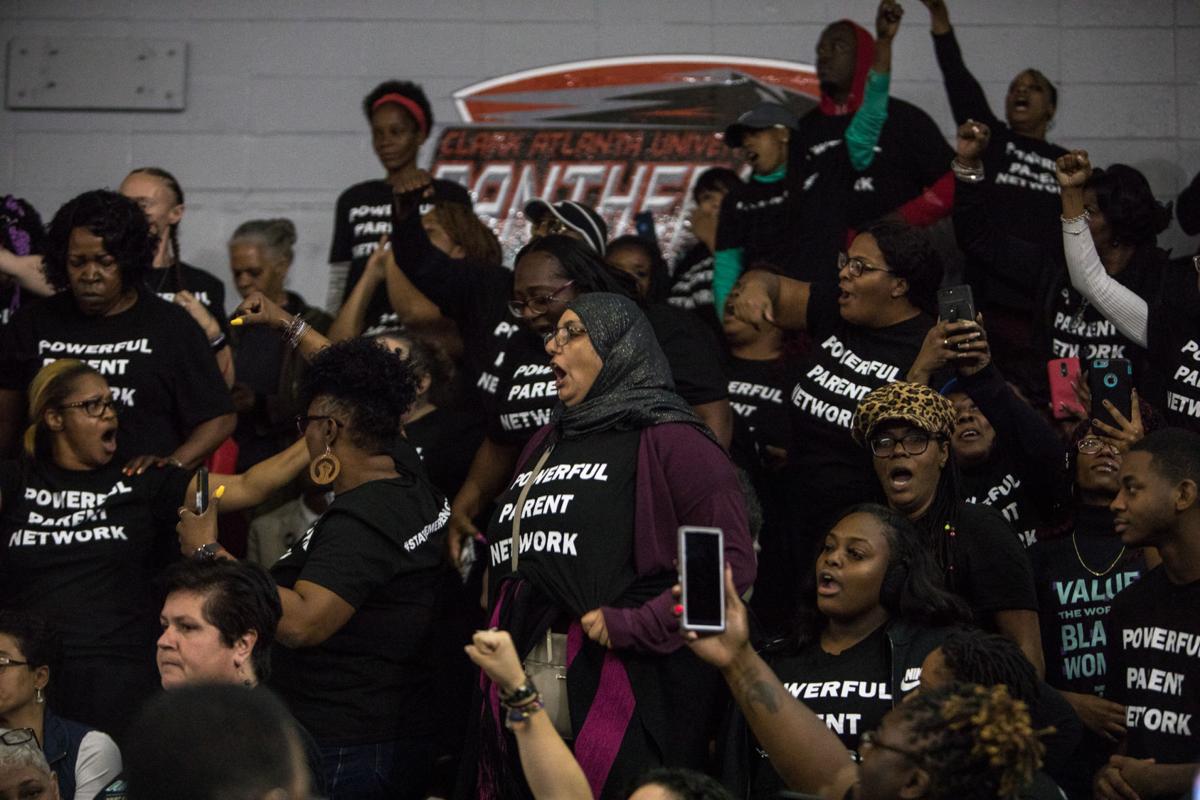 The crowd cheers on Elizabeth Warren whose speech on Nov. 21 in Atlanta centered around Atlanta's black washerwomen strike of 1881.

ATLANTA — In the wake of the murder of a Clark Atlanta University student, Elizabeth Warren honored the history of the black women of Georgia at the university.

The Massachusetts senator and Democratic presidential candidate built her speech to supporters Thursday around Atlanta’s black washerwomen strike of 1881.

Pressley said that despite this being one of the “darkest chapters” in America’s history, the “good news” is that black voters have the chance to bring change with Warren.

“(Warren) knows that we live in nuance and intersectionality,” Pressley said. “She is not just a great teacher, she is a student of the people. She has spent her life studying systems of oppression, to dismantle them.”

Warren was welcomed with an ovation of cheers and stomps from hundreds in the gymnasium bleachers, as she spoke from the floor, and a flurry of “women for Warren” signs waving in the air.

As a white woman, she said, she can never fully understand the trials black Americans have faced.

“I’m not here to tell you about a painful history that black Americans experienced and know all too well. I am here today for a different reason,” Warren said. “I’m here to make a commitment: When I am president of the United States, the lessons of black history will not be lost. Those lessons will live in every part of my presidency – and I will ask you to hold me accountable for that promise every single day.”

But Warren’s speech was disrupted by a crowd that has made appearances at events this week — donning black t-shirts with their name “Powerful Parent Network.” The pro-charter schools group, yelled “Our voice! Our choice!” while the rest of the crowd tried to drown them out with shouts of “Warren! Warren!”

The group has been trailing the presidential candidate, protesting Warren’s policies on charter schools and education funding.

Pressley ran to the aid of Warren — who waited quietly on stage for the shouts to silence. Grabbing the mic, Pressley addressed the protestors directly.

“No one is here to quiet you – least not this black woman who knows what it is when people have tried to put me in a corner and tell me to be silent,” she said. “You are welcome here, but the senator is here to talk about the contributions of fighters just like you. I am going to appeal to you to not dishonor that history.”

Warren jumped back into her speech and raised the story of Alexis Janae Crawford, Clark Atlanta’s own student who, police allege, was killed by her roommate and her roommate’s boyfriend.

“The murder of Alexis Crawford, a Clark Atlanta student, is an unspeakable tragedy…” Warren said, “Alexis’ story happens every day across this country. We need to take meaningful action to protect women, particularly women of color.”

Donald Trump didn’t create the systemic oppression of the black community, she said, but he wouldn’t be president without it.

“Trump’s embrace of white supremacy, white nationalism and corruption threaten to break our democracy beyond repair,” she said.

Warren told the crowd now is the moment to protect abortion access, tackle black maternal mortality and called the murder of black, transgender women an epidemic. She also said her first day as president she will take executive action to boost wages for brown and black women.

“Child care. Health care. Free college. Paychecks. Entrepreneurship. The list goes on. African Americans have gotten the short end of the stick generation after generation,” Warren said, “but we have a chance to change that, a chance to build an America where that’s no longer true. 2020 is our chance to build a better tomorrow for every American.”

Black voters weren’t the only ones in the crowd seeking solace in Warren’s minority inclusive policies.

Georgia residents Tino Mendoza, 30, and Paula Camacho, 20, are both immigrants to America — Mendoza from Mexico and Camacho from Colombia.

“What she said at the end of the debate, the idea of tearing families apart,” Mendoza said, “that’s just wrong. She has a plan to reunite families and everybody is treated like a human being. That’s a really issue important for me, an immigrant.”

Camacho a dreamer — recipient of DACA protections — said Warren promotes safety and a pathway to citizenship for people like her.