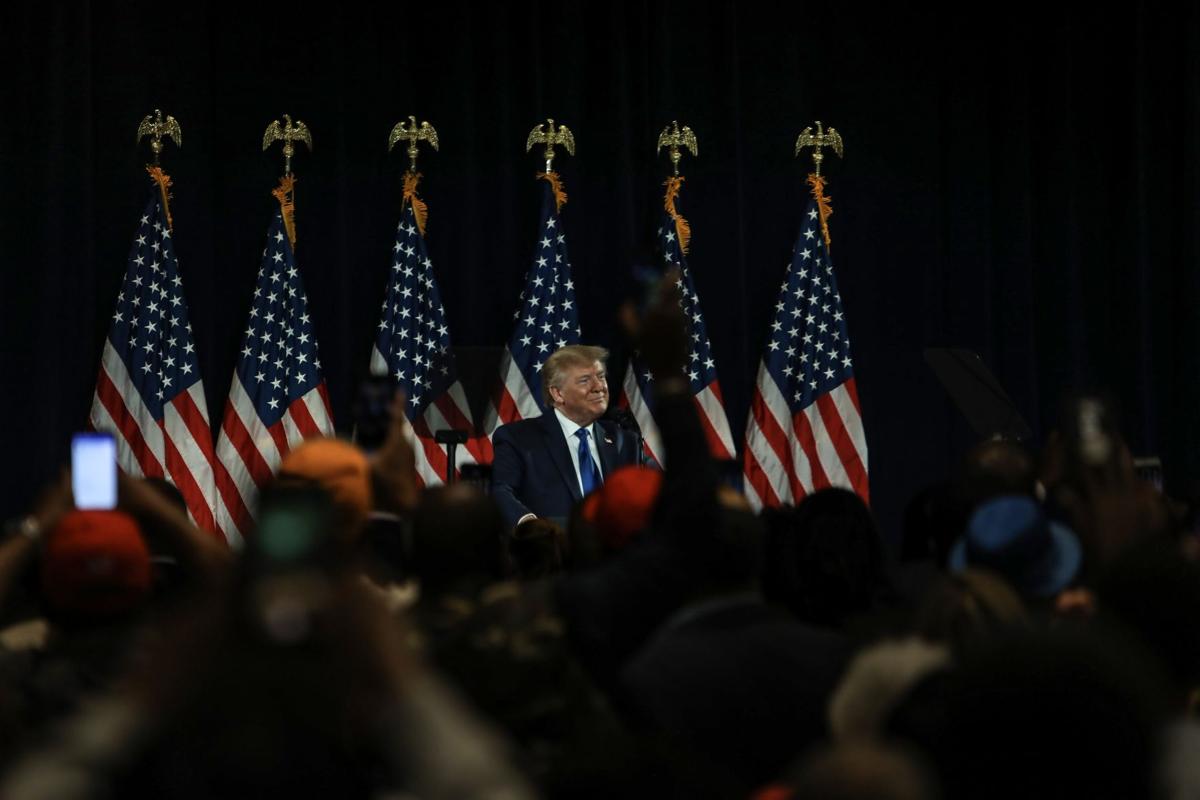 President Donald Trump takes in the cheers at the launch of his 'Black Voices for Trump' initiative in Atlanta on Nov. 8. 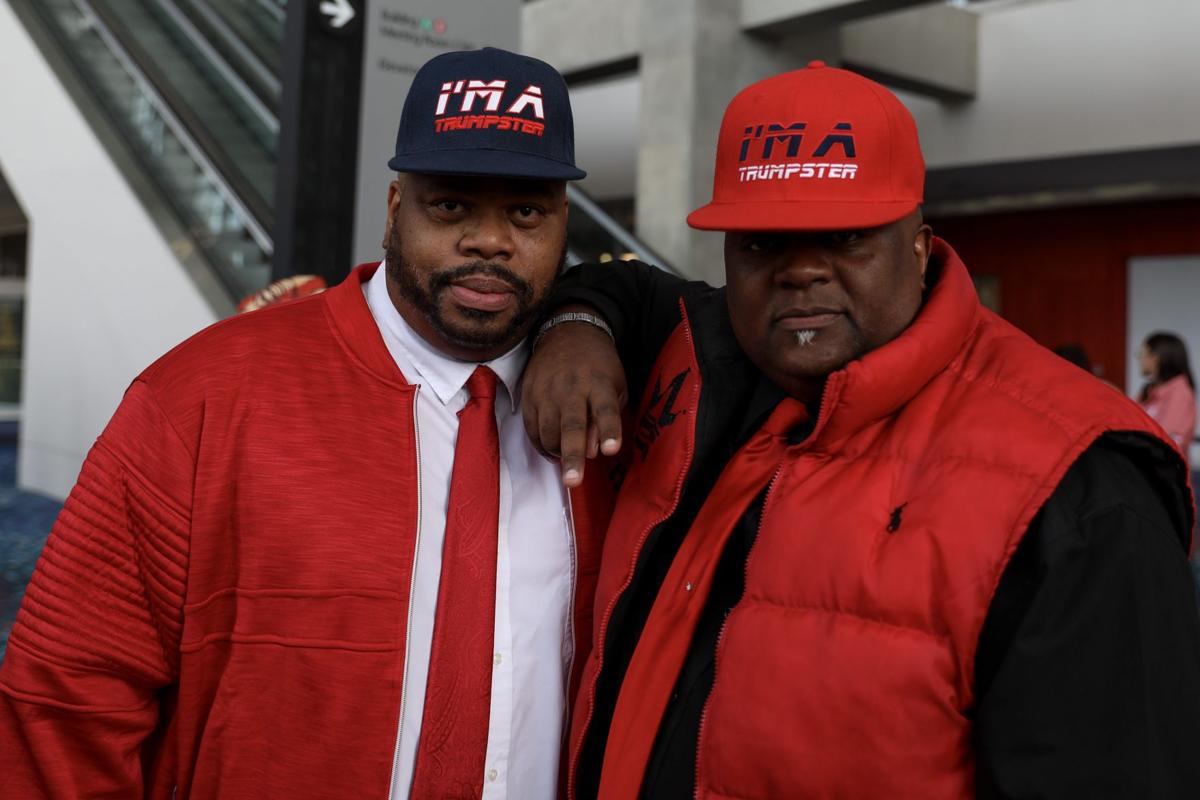 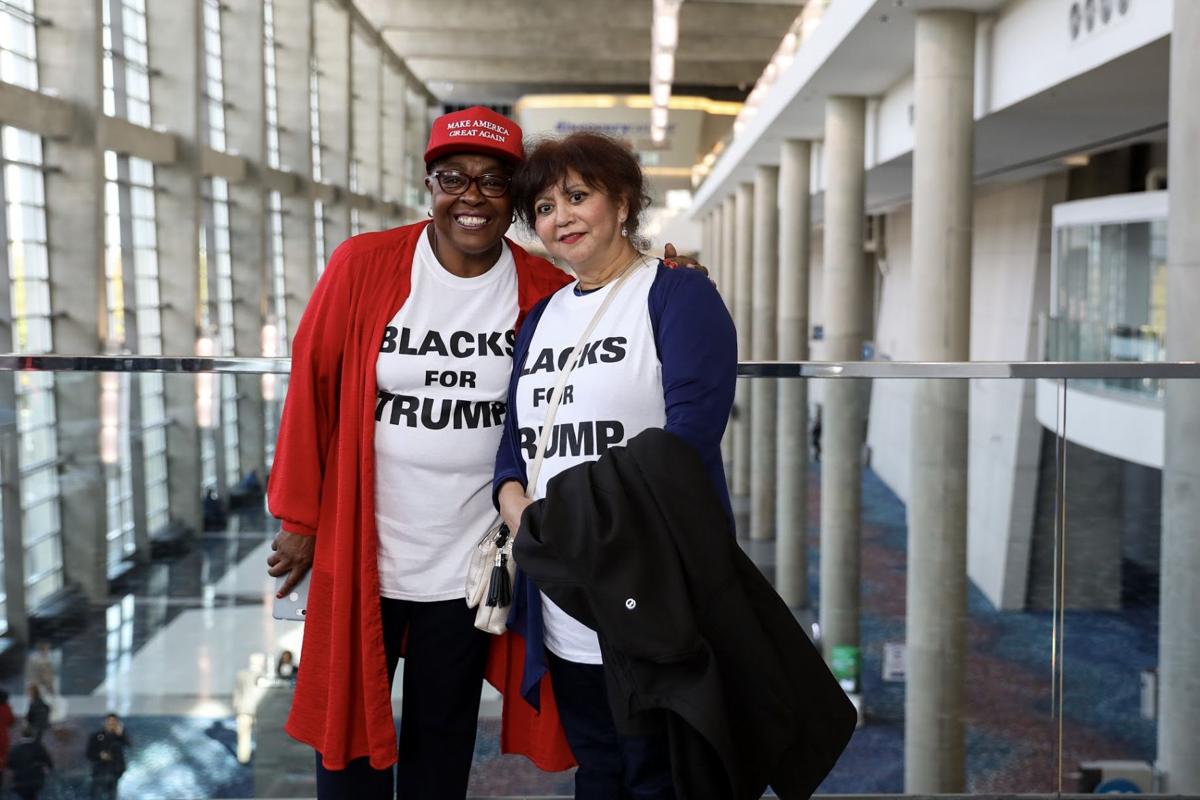 Arlene Charles and Rosa Guerrero pose in 'Blacks for Trump' shirts at his Nov. 8 event in Atlanta. 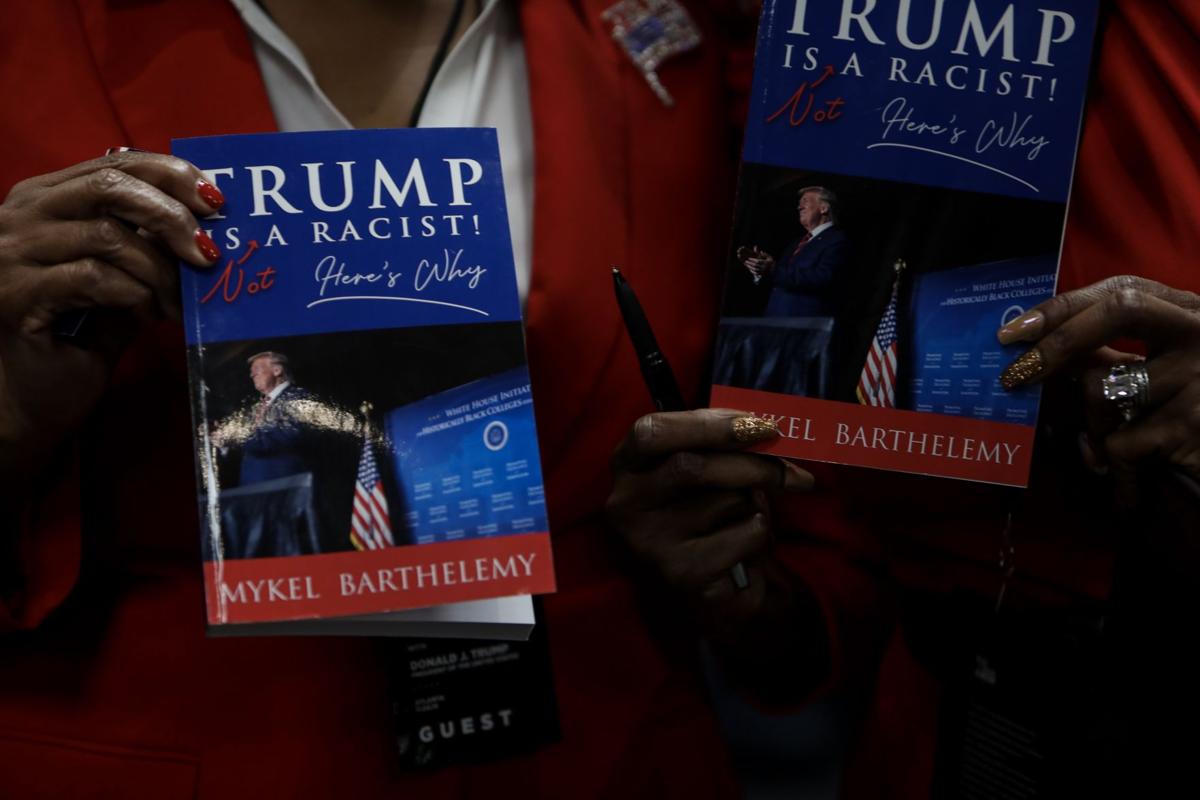 Black voters hold the "Trump is a Racist" book in the audience of Trump's 'Black Voices for Trump' initiative launch in Atlanta on Nov. 8. 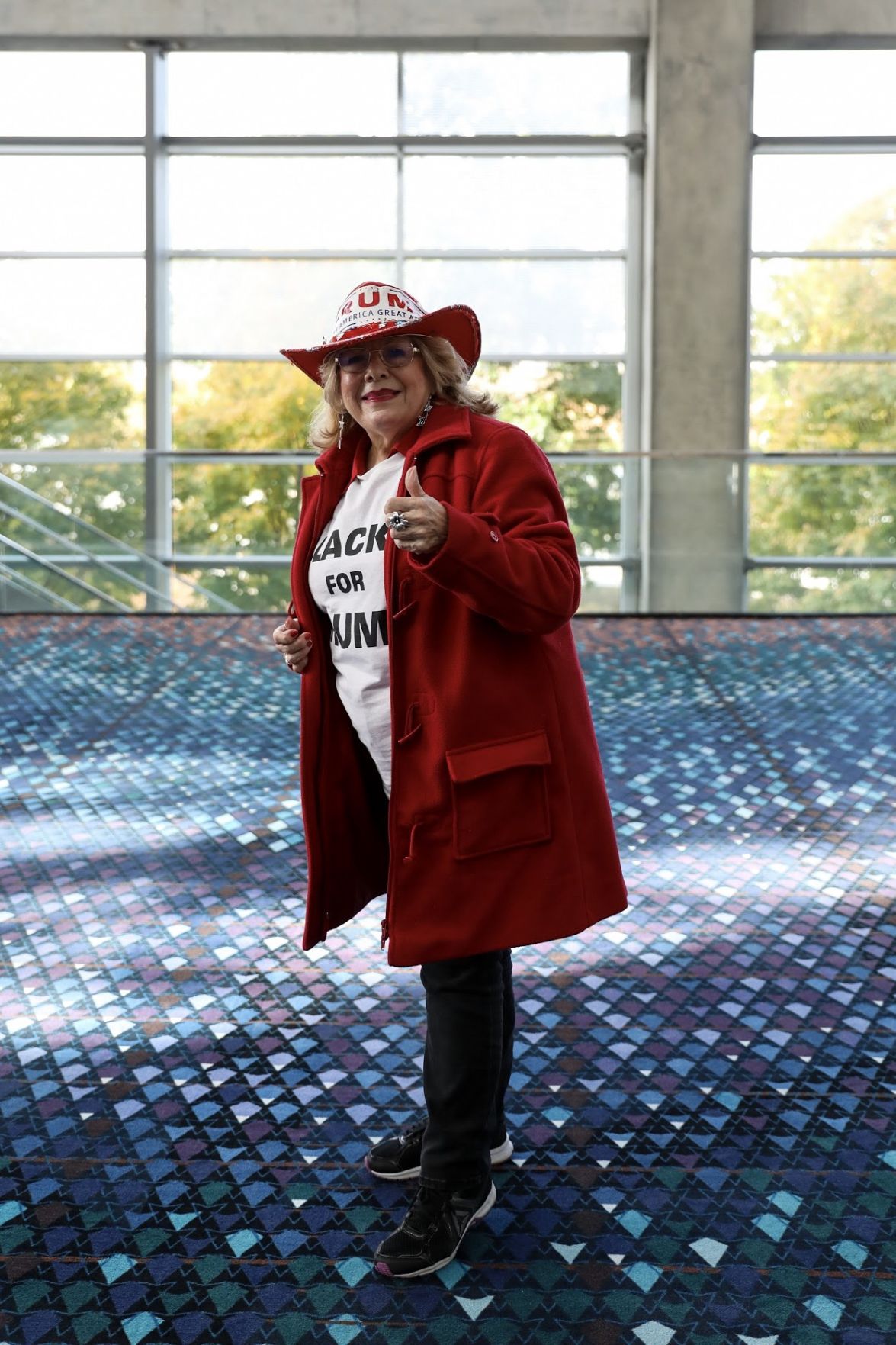 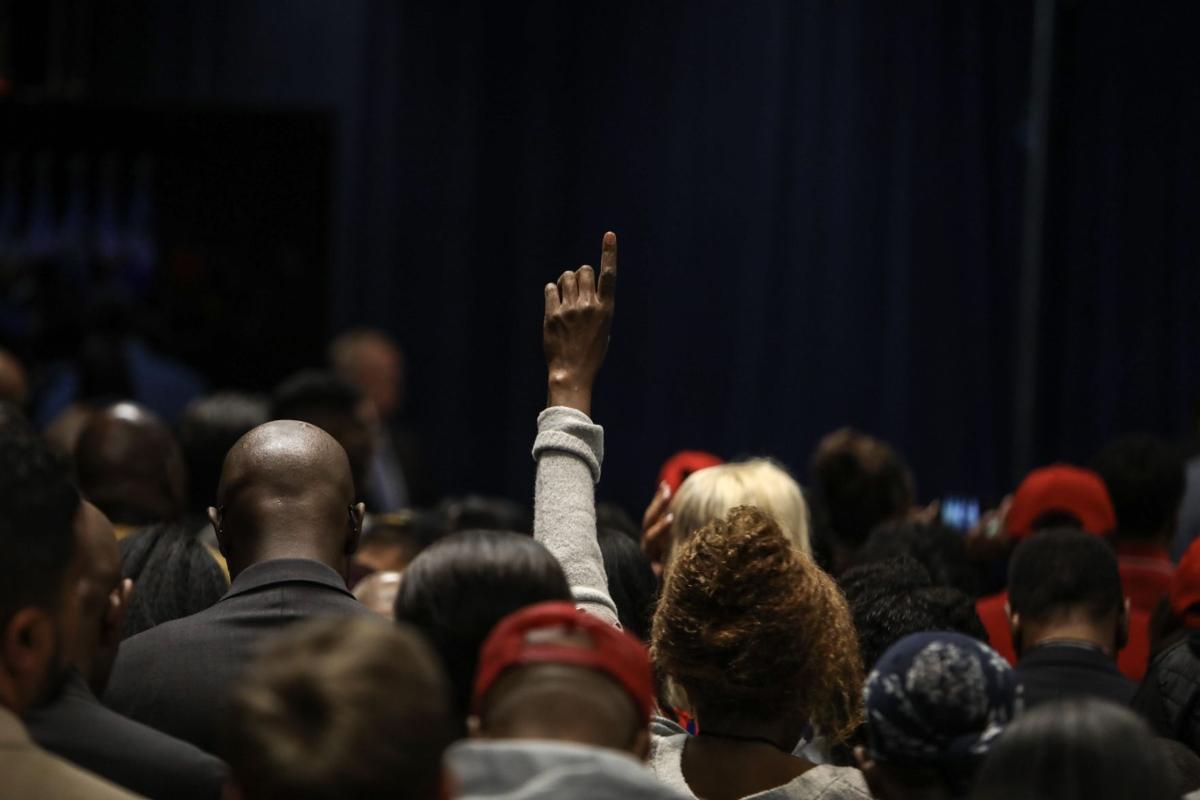 A black Trump supporter holds her hand above the crowd during the opening prayer of the 'Black Voices for Trump' initiative launch in Atlanta on Nov. 8. 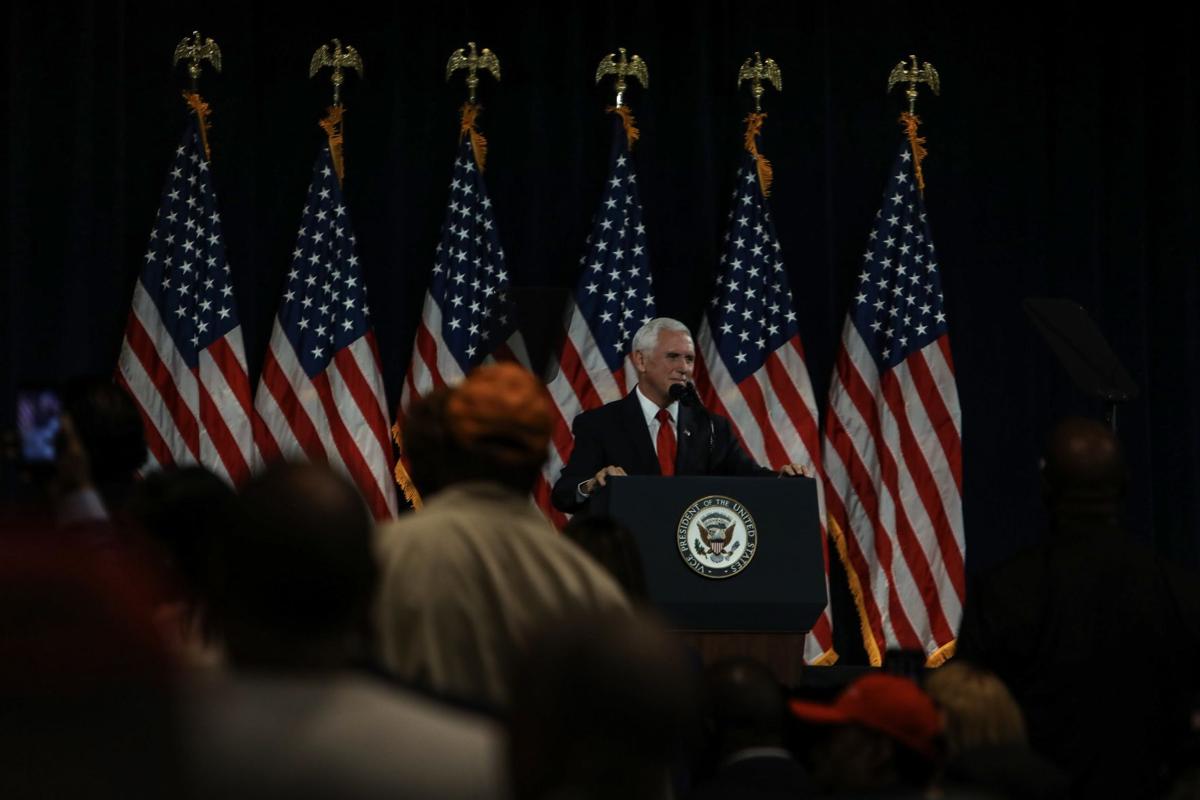 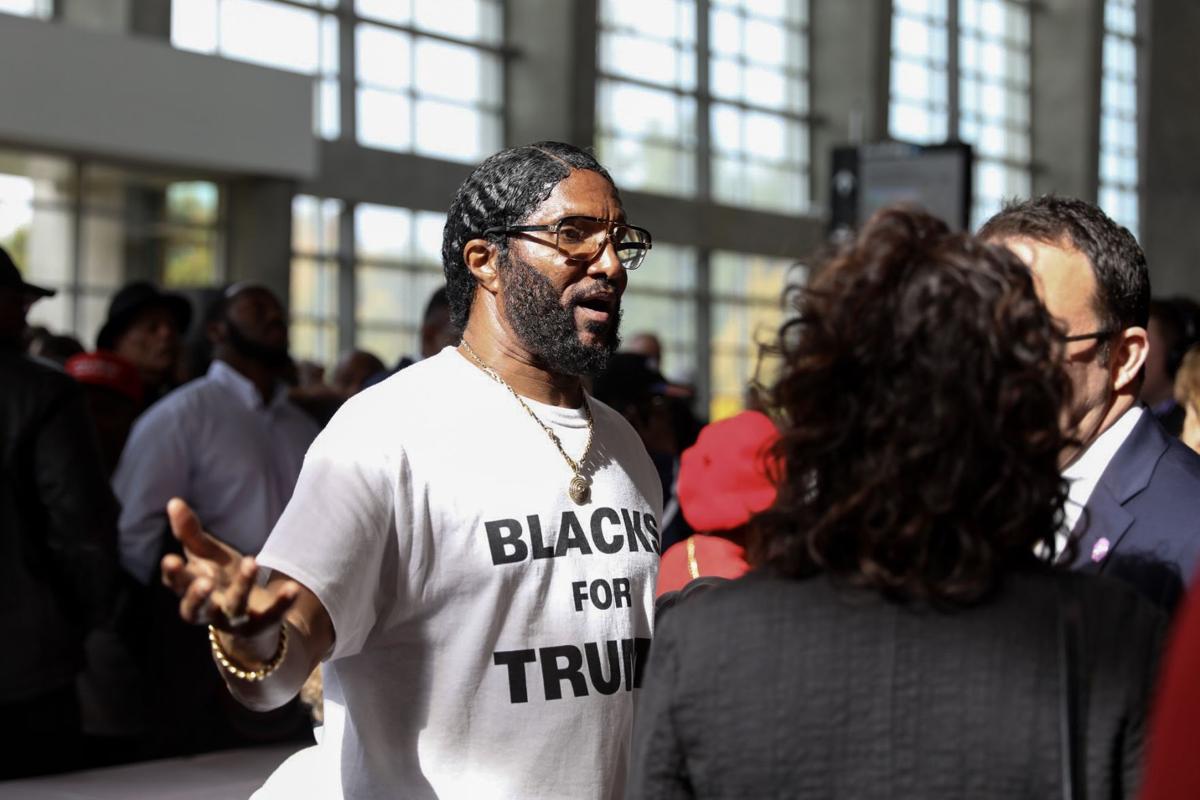 The controversial and radical supporter of Donald Trump Maurice Symonette, of Miami, rouses attendees ahead of Trump's 'Black Voices for Trump' launch in Atlanta on Nov. 8.

Arlene Charles and Rosa Guerrero pose in 'Blacks for Trump' shirts at his Nov. 8 event in Atlanta.

Black voters hold the "Trump is a Racist" book in the audience of Trump's 'Black Voices for Trump' initiative launch in Atlanta on Nov. 8.

ATLANTA — Arlene Charles from Jonesboro believes President Donald Trump is a fighter, and that's what she loves about him.

“The more they fight him the more he fights,” Charles said. “They knock him down, he gets up and I love that.”

Some cited criminal justice reform, others said he stands up against corrupt foreign powers. But no matter the reason these black voters rally behind the 45th president, they all agree: they love him because they say he puts “America first.”

Black voters filled the lobby of the Georgia World Congress center on Friday for Trump’s launch of his “Black Voices for Trump” initiative looking to woo black support ahead of the 2020 election. While the event was held in Georgia, people from all over the country made their way to watch what Trump’s senior adviser Katrina Pierson told the crowd was “another historic moment.”

Reggie Carr and Johnny Thomas are “Trumpsters.” The Atlanta duo created their own clothing line that reads: “I am a Trumpster” and sported it at the black voters event. Carr said that he doesn’t want to be a part of the “silent majority” anymore.

“Our goal is to help bring light to minorities and get them on the bandwagon,” he said. “(Trump) loves America and he loves Americans.”

Trump has black voters best interests in mind, Carr said. Why would a billionaire step down from that platform to be president otherwise?

The event was held in a small room of the Congress Center that held a few hundred, with some left outside. Chants of “four more years” started in spurts throughout the day and “blacks for Trump” chants rang out as the president took the stage.

Lisa Noel Babbage, a member of Women for Trump and candidate in the 7th Congressional district race in Gwinnett County, said the Democratic Party has become too extreme and black voters forgot what being conservative is.

“I remind them, your mom and your grandma are conservative,” Babbage said, “I think black voters forget what being conservative means.”

What does it mean? Caring about God, family and country, she said, but not necessarily in that order.

When questioned about the president’s rash tendencies to speak and tweet whatever is on his mind, these black voters said they appreciated the honesty.

“He says what’s on his mind, we may not like it but at least we know he’s himself,” Babbage said. “I’d rather have a straight shooter than someone who’s a mask.”

Ben Carson, secretary of Housing and Urban Development, thanked the crowd for coming and thinking for themselves.

“Thank you for your courage because in this day and age it takes a lot of courage to support President Trump, ” he said.

Carson agreed with those black voters who said the values of their mothers and grandmothers line up with Republican values.

Trump took the stage and thanked prominent Georgia Republicans. He called U.S. Sen. David Perdue “instrumental” in the Republican success in Georgia and said the “state is doing much better” with Brian Kemp as governor.

Trump called U.S. Rep. Doug Collins a “warrior” during the Mueller hearings. After cheers noting that the crowd likes Collins, “they better like you,” he said. A possible nod at Collin’s application for U.S. Sen. Johnny Isakson’s open senate seat.

The controversial group 'Blacks for Trump' was early for the event by hours, forming the first group outside of secured area, waiting to enter the venue.

A familiar political face led the group in a ‘Blacks for Trump’ t-shirt, thick sunglasses and gold medallion necklace. Maurice Symonette — also known by many other names such as “Michael the Black Man” — made headlines back in 2017 while standing behind Trump at a rally in Phoenix.

The radical activist — some even say religious cult member — from Miami made the trip with several others to attend Trump’s black voter initiative in the Peach State.

Symonette seemed uninterested in answering CNHI questions, but he told CNHI he and his group were here “to unite with Trump and overthrow the Democrats.”

But whether voters seemed all-in for Trump or still sitting on the fence, they shared a common feeling that Americans should be put before all else.

“I've lived in lots of places. I lived in South Africa. I’ve lived in Europe. And coming back to America years ago, it’s the best place to be and one of the things that inspired me is President Trump loves America,” Charles from Jonesboro said. “When he says ‘America first’ that’s what most countries do, they love their countries first and their people."